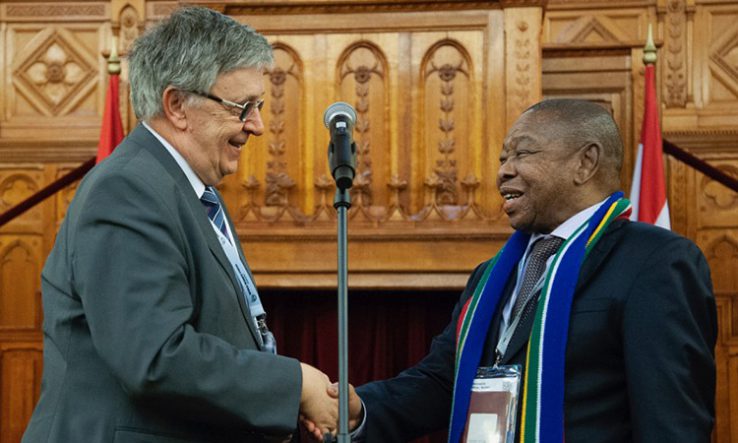 It is exactly that kind of boost he hopes his country will get from hosting the WSF in two years, when the biennial gathering comes to Cape Town.

“I don’t want to pre-empt anything,” he says in an exclusive interview with Research Professional News on the forum’s sidelines in Budapest. But Nzimande, who has headed South Africa’s merged science and higher education department since May, says that a lasting impression from the forum is the need to bridge the funding gap between North and South.

Nzimande likes the idea of science for peace. Science for inclusive development. For justice. For equality. He bristles when he recalls how his counterparts from countries that spend more money on weapons and defence than on almost any other budget area lecture South Africa about how to spend its small budgets.

He says that sharing science funding more equitably can be a win-win for poor and rich countries alike. “You find innovation deep in our rural areas. You find it among women. You find it among poor people,” he says. If funding opportunities exclude some people or countries, it will miss many good ideas, he adds.﻿ “I hope by hosting the forum in Africa we can show that you can’t advance one part of the world through science while leaving other parts behind.”

Nzimande is a veteran politician who spent many years as South Africa’s higher education minister, with a short spate in charge of transport before returning to the expanded brief this year. His views on higher education are fairly well-known. He regularly butted heads with students during the country’s disruptive Fees Must Fall protests, refusing to speak to protest leaders and commenting that “students must fall” if they didn’t accept the government’s initial concessions.

Much less is known about his views on science funding. When probed about his ability to rustle up more funding for South African science, he grudgingly admits that he has more direct influence on the science budget than most, but that it’s “ministry of finance permitting”—an aside that draws booming laughter from the officials that are sitting in on the interview.

But for the last few days in Budapest science has taken centre stage and Nzimande is eager to share his impressions.﻿ “﻿I must say I have been inspired by the interactions. I have hundreds of ideas in my mind. You can’t implement all of them."

He says the rise of fake news and anti-science movements like climate change denialism have underscored the need to protect the credibility of science. Although he believes South Africans by and large respect science—something he partly attributes to the stark difference made to many South Africans’ lives by innovations like antiretroviral drugs to treat HIV—he warns this positive attitude must not be taken for granted.

After all, he says, a little over a decade ago, South Africa was “on the verge of huge HIV/Aids denialism”. This refers to the decade from 1999 to 2008 when several senior South African policymakers, including then president Thabo Mbeki, offered a platform for charlatans that said HIV does not cause Aids. “The most serious danger is that you can begin to plant doubts about science as a viable way of understanding our world and the challenges that we have,” he says.

He softens his tone when probed about the threat to science posed by meddling politicians—a hot issue in Hungary right now where scientists accuse the right-wing government of strangling funding for fields of which it does not approve, like gender studies.

Nzimande says there will always be tension between government priorities and the priorities of the academic community. “It happens everywhere. It may be taking its sharpest expression here in Hungary at the moment, but it’s an issue in South Africa too,” he says. “When South African science councils say government is using its funding to influence what they do, there is an element of truth in that, because we do have priorities.”

In South Africa, such priority-setting includes channeling more funding to women and black scientists. He admits this can create tensions and accusations of interference with academic freedom. “But part of that debate is healthy, it’s a debate that enriches the country.”

South Africa will host the World Science Forum 2021 in Cape Town, tentatively in the first week of December that year.

A version of this article also appeared in Research Europe﻿