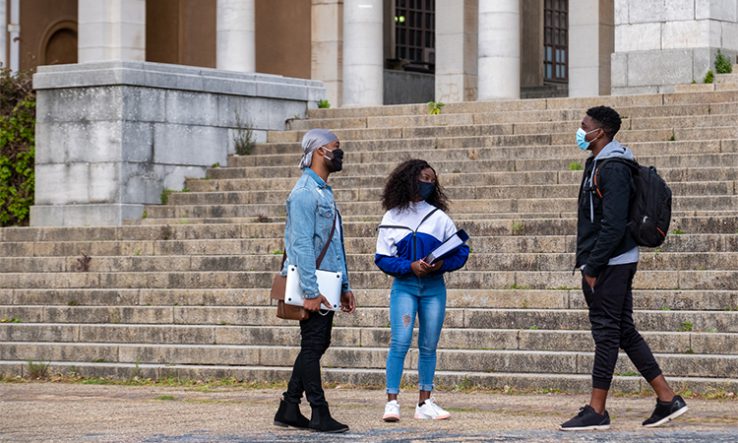 About half the funding shortfall in support for poor South African students will come from the Department of Higher Education and Training’s allocation to universities, the higher education minister has said.

The news comes after campuses were rocked again in recent weeks by protesting students. Protesters are demanding permission to register for the 2021 academic year despite owing their universities money for previous years. They are also protesting funding constraints faced by the National Student Financial Aid Scheme, which provides financial aid for poor students.

A weary-looking Blade Nzimande told MPs on 17 March that NSFAS had a shortfall of R5.67 billion (US$380 million) for the current academic year, close to half of which would be funded by a R2.5bn cut to universities.

Funds would be re-prioritised from “very important grants that we give to the universities,” Nzimande told MPs on Parliament’s portfolio committee on higher education, science and technology while briefing them on the government’s response to the protests.

Ahmed Bawa, chairman of Universities South Africa, told the same meeting that his organisation was aware of the proposed cut to university grants. He said the cuts were likely to come from universities’ “subsidy, infrastructure development grants and earmarked grants”. The amounts to be deducted from each university had yet to be finalised, he said.

Nzimande said relentless budget cuts, the extension of the 2020 academic year due to the Covid-19 pandemic, and the fact that more students are eligible for support because of retrenchments and business closures in 2020 all contributed to the NSFAS shortfall.

He said that NSFAS had continued to fund students during the hard lockdown, when universities were closed. “We were never compensated for the extended academic year. We blew all the NSFAS reserves that were there,” he said.

Nzimande added that R500m would be re-prioritised from infrastructure projects at tertiary and vocational education and training colleges, and R100m saved from goods and services.

The largest chunk of the NSFAS shortfall, R3.3bn, will be redirected from the National Skills Fund, which funds training opportunities for unemployed youth.

“In many ways we are robbing Peter to pay Paul,” Nzimande said, adding that the NSF and NSFAS will sign a memorandum to ensure that some critical skills continue to receive support.

Bawa warned MPs that university finances remained extremely strained. Students owed R14bn in 2019, he said, of which half is owed by students who have already graduated. “The student debt challenge is massive. There is no indication of national government support for this to universities,” he said.

University vice-chancellors have agreed to address debt individually at institution level. Most universities will allow students to register despite owing money, as long as they sign an agreement with the university acknowledging their debt.

However, Bawa warned that this just “kicks the can down the road” rather than solves the problem for universities struggling to balance their books.

Nzimande agreed that some universities simply cannot afford to delay debt repayment, and wealthy institutions had more flexibility to deal with it than poor ones. “Perhaps [the University of the Witwatersrand] can deal with a certain number of students with debt, so will [the University of Cape Town]. But if you ask Zululand or Walter Sisulu to do that you are asking too much

“Already the academic year is short. Already we are still faced with this virus, there is talk that there might be a third wave,” he said. Bawa said there is “no chance” that universities can solve the funding crisis alone.

MPs on the committee expressed concern about the long-term effects of the budget cuts. Tebogo Letsie, from the ruling African National Congress party, warned that the “reprioritisation will come back later to haunt us”.