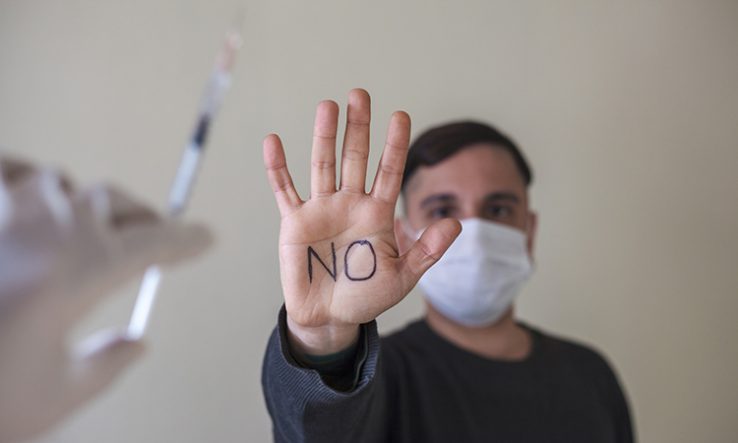 Trend is a big concern as vaccination pace appears to falter

Close to half of South Africans aged 18-24 told a survey that they are hesitant to take the Covid-19 jab. The news comes as health professionals raise concern about an apparent drop in the demand for vaccines.

The survey was carried out by the Human Sciences Research Council and the University of Johannesburg between 25 June and 12 July. It counted as ‘hesitant’ those who, when asked whether they would take the Covid-vaccine, answered that they would definitely not get the vaccine, that they would probably not get jabbed, or who said ‘I don’t know’.

The survey was carried out virtually in six languages, drawing on a total of 7,700 respondents whose age, race and educational profiles broadly represented the country’s adult population.

Of people aged 18-24, a whopping 45 per cent were hesitant, a proportion that has grown from 37 per cent since January when a similar survey was carried out. This age group has yet to become eligible for vaccines—something which the architects of the survey note as being a cause for concern. By comparison, only 14 per cent of those aged 60 and above were hesitant.

White South Africans were nearly twice as hesitant to vaccines as respondents who identified as Black Africans, the survey found.

‘No clear answer’ to youth hesitancy

It’s not those with low education levels who are most hesitant. Of those who identified as ‘student or learner’ in the sample, 42 per cent said they were hesitant, with half of those saying they would definitely not get the vaccine.

There was currently “no clear answer” as to why young people are vaccine hesitant, said Carin Runciman, director of UJ’s Centre of Social Change, during the virtual launch. “We need more research to understand the concerns of young people better,” she said.

Kate Alexander, South African Research Chair in social change at UJ, told the launch that a “big campaign” was needed to motivate young people to be vaccinated, and that academics and student leaders needed to play a part in that.

Overall, vaccine hesitancy has dropped since the last survey, carried out between 29 December 2020 and 6 January 2021, from 33 per cent to 28 per cent. The only demographic groups where hesitancy grew between the two surveys was among youth aged 18-24, adult whites, and students and learners. In all other groupings, hesitancy fell or stayed the same as before.

The survey team from HSRC and UJ published a second report on the same day, looking at self-reported explanations in the survey for vaccine acceptance or hesitancy. Those who are hesitant raised concerns over side effects, efficacy and distrust of the vaccine or governments as the main reasons. Side effects were more common concerns among poor adults, while people living in urban areas said they were more worried about side effects than those who live in rural areas.

Runciman said that whites were far more concerned about ineffectiveness and side-effects than other groups, and were also more likely to try alternative treatments over a vaccine.

Social media not a big driver

Only 5 per cent of respondents said “social media or other rumours” were the reason they did not want to get vaccinated, and an even smaller proportion said their reservations were because of religious beliefs. “If anything the most religious are the most accepting,” said Alexander.

In recent weeks, there have been reports of a slump in demand at vaccination centres around the country, with concerns growing that the vaccination drive is losing steam with only around 10 per cent of the country’s adults fully vaccinated.

However, Narnia Bohler-Muller, executive director of the democracy governance and service delivery research programme at the HSRC, who was also involved in the survey, said the country’s problem was not so much about demand but delivery. “We must get the vaccine to the people,” she said at the launch of the survey.