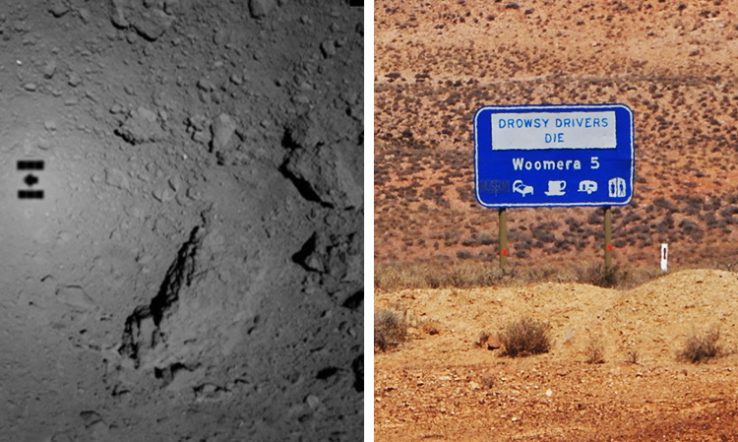 The successful landing of a sample of asteroid material in the Australian outback typifies Australia’s approach to the space industry, a leading space administrator has said.

Anthony Murfett, deputy head of the Australian Space Agency, says Australia’s space missions are strongly underpinned by international engagement and that this week’s successful Hayabusa2 mission required close work with both the Japan Aerospace Exploration Agency and Nasa in the United States.

The mission saw the delivery to Earth of a sample of subsurface material from the 162173 Ryugu asteroid on 6 December. The sample was acquired in 2019 during two “touch and go” contacts with the asteroid by the Japanese Hayabusa2 probe. The material—weighing about one gram—landed in the Woomera complex, normally used for Australian military aerospace operations, descending by parachute in a container 40 centimetres in diameter.

Two communication centres based in Australia provided navigation and communication services for the mission: Nasa’s Deep Space Communication Complex in Canberra and the European Space Agency’s New Norcia station in Western Australia. Both are managed by the Commonwealth Scientific and Industrial Research Organisation (CSIRO), Australia’s national science agency, on behalf of the overseas agencies.

The Australian Space Agency’s input to the mission included coordinating regulatory matters. Australian government permission was needed to authorise the landing of the sample in the country.

The Australian Space Agency estimates the size of the Australian “space economy” at A$3.9 billion and is aiming to grow that to A$12bn, comprising 20,000 jobs, by 2030. The agency was created in 2018, partly to be a “front door” for other countries to work with Australia, Murfett said.

Ed Kruzins, CSIRO’s director of Nasa operations and the Canberra Deep Space Communication Complex, said CSIRO was “honoured” to have been able to provide space tracking services to the missions. The complex is one of three global centres, with the other two in the US and Spain.

“We have provided this consistently over the last six years since launch from Japan, downlinking data from asteroid Ryugu and providing navigation information for Hayabusa2,” he said. “For nine hours a day, Canberra controls the entire deep space network through remote connection.”

The complex operates a 70-metre antenna dish and three 34-metre dishes, with the transmitters and receivers located underground.

Australia’s defence force was also involved in the mission. Andrew Seedhouse, chief of the intelligence, surveillance and space division at the Defence Science and Technology agency, said the defence force wanted to develop a “stronger space capability”. Its priorities were in space control (which he defined as knowing where objects were and avoiding conflicts), space services such as satellite communications, and geospatial information and intelligence.

He said the Australian space industry was “in a bit of a hurry” because of federally mandated targets to develop independent space capabilities. “That means we’ve got a lot of capability technology to develop. We also have a lot of bright new [space] industries that are starting up in Australia.”

Curtin University’s Desert Fireball Network helped track the landing. The fireball network uses a set of cameras stationed in the Australian outback to capture images of meteorites and predict their landing sites so they can be found.

Astronomer Fred Watson, who works at Australia’s Department of Industry, Science, Energy and Resources, said the recovery was “thrilling” because “the capsule represents a potential milestone in our understanding of the solar system’s history. And perhaps also in our understanding of the origin of life on Earth, since complex organic molecules are likely to be among its precious cargo.”

Masaki Fujimoto, deputy general director of the Japan Aerospace Exploration Agency, said the study of the recovered material would help answer “fundamental questions” such as where all the water on Earth came from. He said Woomera provided “a big flat area” for the landing, quick transport back to Japan and cooperation with “nice people who share our values”. The good relationship had been useful when the pandemic hit and international travel become difficult, he said.

“We were preparing a recovery operation for three or four years and then came Covid-19. If it were not for the support from the Australian Space Agency, I don’t think I’d be sitting here.”