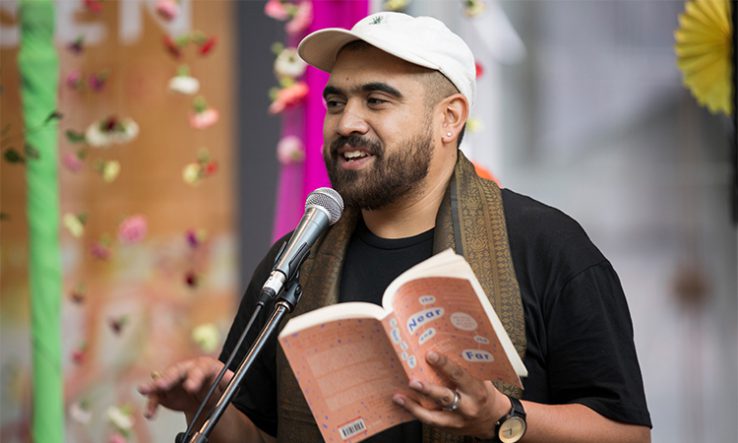 Many entertainment workers and university-employed artists could be pushed into poverty, says union

Paul Murphy, the union’s chief executive, has called for a “targeted and specific rescue package for the arts” that will also protect casual workers and freelancers.

The package would include artists, writers and performers who are hired by universities as casual teaching staff in areas such as music, digital arts and publishing.

Writers such as Omar Musa (pictured) are frequent guests at university arts and politics discussion forums, literary festivals and concerts.

Prime minister Scott Morrison recently announced that all entertainment venues would be shut down as part of national emergency measures to contain the Covid-19 virus. The move has resulted in the cancellation of major arts festivals and theatre productions, as well as the closure of art exhibitions.

As part of a government stimulus package, eligible businesses will receive a tax-free cash payment of up to $100,000 to keep staff employed during the virus crisis. However, the union says this will not help workers in Australia’s arts industries, which have high levels of casual and part-time workers.

Murphy said that Centrelink—the federal government’s welfare service that administers unemployment benefits—was “being inundated with applications for the new jobseekers’ allowance from workers in the sector”.

He said shutdowns and restrictions would have “a serious economic impact on the live performance and entertainment sector and the tens of thousands of people it employs, from front-of-house workers to production crew [and] performers”.

“Due to the intermittent nature of their employment, many workers in the arts and entertainment industries are already on the economic margins and could be pushed into poverty.”

On social media, dozens of film technicians and creative artists such as set designers and prosthetics artists have posted stories about layoffs from films and television series in production.

Artists employed as casual staff by universities in areas such as book illustration, creative writing, fine arts and photography are also affected. Many have posted comments on Twitter about struggling to manage the out-of-pocket expenses involved in setting up home studios to teach online courses for universities that may last for only one semester.

“We are concerned that no conditions requiring employers to keep workers in jobs have been attached to the money set to flow to businesses,” Murphy said.

“Given the lack of conditions attached by the government to business cashflow payments, MEAA is putting all employers in the arts and entertainment sectors on notice that we will be watching them very closely.”