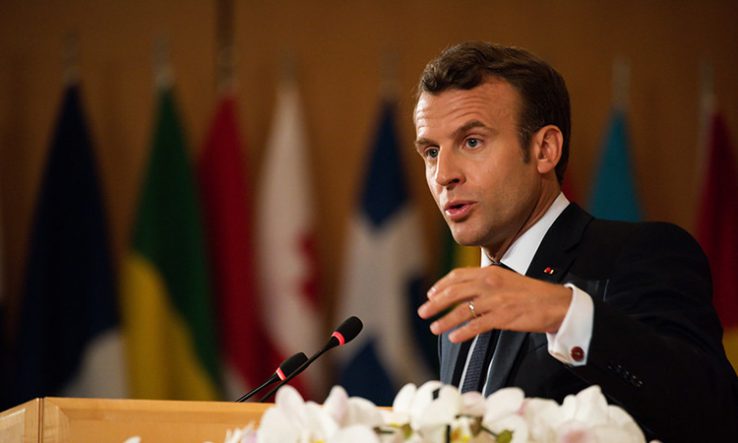 Students across France have been ordered to stay at home for a month rather than attend classes, following the beginning of a second nationwide ‘lockdown’ intended to tackle the Covid-19 pandemic.

In a televised address to the nation on 28 October, during which he announced the new measures, president Emmanuel Macron (pictured) said universities and higher education institutions “will provide online courses”.

The move follows a rise in case numbers that Macron said amounted to a doubling in the past fortnight.

“The virus is circulating in France at a speed that even the most pessimistic forecasts had not anticipated,” he said.

The measures announced include closing campuses to almost all staff and students. As a result, face-to-face teaching activities have been suspended from 30 October until 1 December.

Some studio- and lab-based teaching and research will be permitted to continue, but research should be carried out by teleworking whenever possible.

Speaking on television on the evening of 29 October, prime minister Jean Castex underlined the announcements.

“At universities and higher education institutions, all lectures and tutorials will be conducted by distance learning. Only practical work will be able to be maintained in the institutions under specific conditions,” he said.

Minister for research and higher education Frédérique Vidal said universities were closing their doors for health reasons but that this did not mean that they were closed.

“Universities are potentially [sites of] a great deal of intermixing. That is what must obviously be avoided. Universities are not closed simply because the teaching methods have been adapted,” Vidal told Public Senat, a public television channel dedicated to government affairs, later reiterating some of her comments on Twitter.

Measures have been taken to allow some work to continue.

The Sorbonne in Paris, also known as Paris 4 University, said on its website that “practical work” had been suspended. But it said it had “adapted” its libraries with a “drive-through service” that will allow students to order books online and collect them in person. All current loans have also been extended and electronic documents will continue to be available.

The new lockdown or ‘confinement’ allows primary and secondary schools to remain open, but all higher education institutions, from public universities to grandes écoles, have seen campuses shut.

However, some preparatory classes, post-secondary institutions that ready students for entry into the competitive grandes écoles, have been allowed to remain open. Often associated with high schools, classes prépas are nonetheless higher education institutions, and so appear to have fallen between the cracks, with those operating in high school buildings being classed as secondary education.

Others have imputed darker motives to some preparatory classes staying open. The Conference of University Presidents (CPU) expressed “amazement” and suggested the move was a case of class privilege.

“It is well known that the preparatory classes, which are often overcrowded, welcome pupils from more privileged social backgrounds. Nothing can justify, apart from a sociological reflex of reproduction, such a difference in treatment. This decision removes all credibility from the government’s announcements in favour of equal opportunities, which it claims to make its hobbyhorse,” said the CPU.

The body also expressed concern that closures would prove damaging to students, and suggested should universities undertake a range of measures from prioritising welcoming vulnerable students, offering tutoring positions to later year students, and maintaining research activity on campus.

“Massive dropping out and de-socialisation cannot be the only prospects we offer our youth,” it said.

The CPU also stressed the role of universities in combating the virus, including through medical research, saying: “Universities are in the front line in fighting this virus, whether it be with our researchers, with our health students in our hospital and university centres.”

Research Professional News contacted several universities and écoles for comment but was unable to obtain responses due to the ongoing Toussaint holidays.