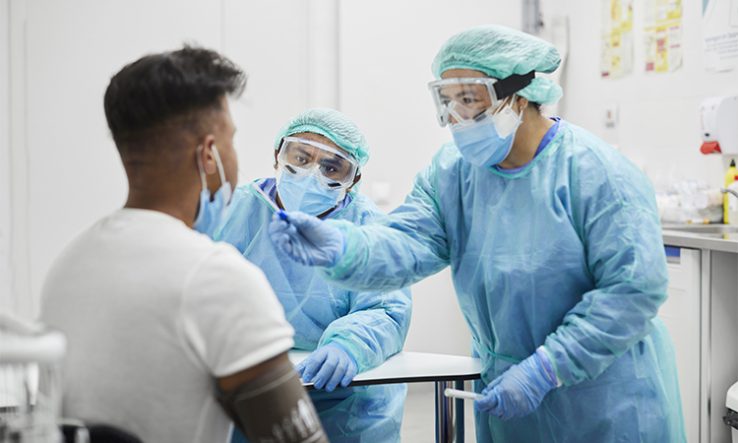 Female doctor taking coronavirus sample from man. Frontline workers are in protective workwear. They are at hospital during epidemic.

Many pandemic trials were poor quality or duplicates of existing trials, groups say

Medical advocacy groups have criticised what they say was a “waste” of health-related research in Europe during the Covid-19 pandemic.

“It appears likely that most investigative Covid-19 drug trials registered in the EU (and in virtually all other jurisdictions) eventually ended up as research waste,” authors from the groups wrote in a report on Covid-19 trial integrity, published on 16 May.

It says: “A key reason why decades of efforts to curb research waste have failed to deliver much progress is perpetual buck-passing on this issue between regulators, funders, industry, ethics committees, research institutions and investigators.”

“Drug regulators and the wider medical research community now concur that this proliferation of uncoordinated, unaligned, underpowered and often badly designed trials of repurposed drugs constitutes a major collective failure of the global medical research enterprise during the pandemic.”

Part of the problem lies with the people listing trials, according to the report. Transparimed founder Till Bruckner told Research Professional News that, during the pandemic, “nobody knew which [trials] were still ongoing, which ones had been completed and which ones had been discontinued”. He said this “made coordinating global research efforts nearly impossible”.

Among other recommendations, the report calls on the European Commission to “set up a working group to develop actionable recommendations for improving clinical trial coordination and design, and curbing research waste”.

The Commission did not respond to a request for comment. The European Medicines Agency said that it provided scientific advice and offered informal consultation to guide vaccine developers on the best study designs, and that its role “does not include the authorisation or supervision of clinical trials in the EU” as this is done at national level, but that since January it has had a bigger role in supporting countries on trial assessment.

“To optimise the impact of clinical trials, early on in the pandemic, in March 2020, EMA’s human medicines committee, the CHMP, made a call urging the EU research community to ‘prioritise large randomised controlled clinical studies’ as these were most likely to generate the conclusive evidence needed to enable rapid development and approval of potential Covid-19 treatments,” the agency said.

It added that it endorsed a joint statement on the prioritisation of Covid-19 clinical trials, published by the International Coalition of Medicines Regulatory Authorities (ICMRA), that described how trials could best generate conclusive evidence and set out concrete actions for collecting, analysing and reporting data.

“We fully recognise the need for bigger, better, more impactful clinical trials that generate robust evidence needed to support the translation of scientific innovation into public health gains for patients,” the EMA said.

“We share a commitment to transform the environment for clinical trials in the EU with the European Commission and our partners in the member states. This is why we have jointly launched the new EU-wide initiative Accelerating Clinical Trials in the EU. One specific aim of ACT EU will be to support the conduct of large-scale multinational clinical trials with broader geographical scope.”

Update 17/5 – This article was updated with the response from the EMA.