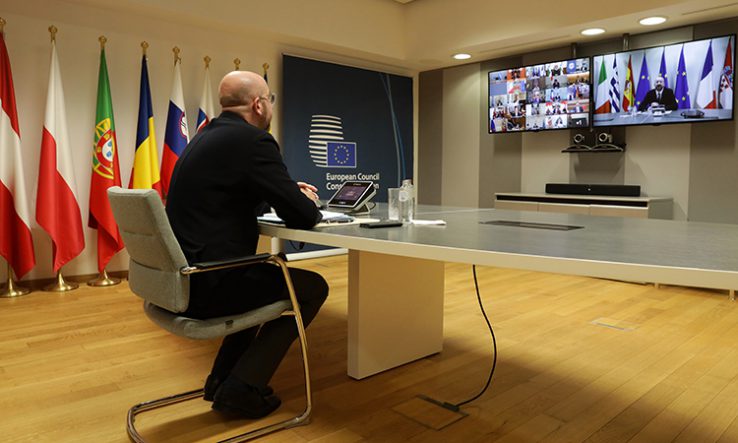 EU leaders have promised to do whatever they can to facilitate research to fight the Covid-19 pandemic, after discussing it via videoconference.

“We will do everything possible to support research, coordinate efforts and seek synergies within the European scientific and research community so as to maximise the full potential of research across the EU,” leaders in the European Council said in a statement published after the discussions on 26 March.

“There is an urgent need to share scientific information and to collaborate both within the EU and worldwide on the challenge of developing a vaccine in the shortest possible time,” the Council said, adding that leaders of EU countries would work with their counterparts in the G7 and G20 groups of world-leading economies.

The statement came as EU sources told Research Professional News that the European Commission is considering whether and how EU-funded projects R&D projects could be reoriented in light of the pandemic. Sources said such a move would be done within the projects’ budgets and without administrative burden for the beneficiaries or an amendment to the grant agreement.

The Commission has already pushed back deadlines for numerous R&D funding calls to accommodate researchers affected by Covid-19. In one of the most recent changes, deadlines for health calls were extended by an initial two months “to allow medical professionals to focus on their fight against the coronavirus and to leave more time for preparing their applications”.

Its approach has received praise from university leaders adapting to an onslaught of challenges, including the need to pull students out of overseas study programmes and suspend in-person classes.

“The Commission has been extremely responsive to early and immediate requests to extend deadlines, and we are very grateful for the flexibility they have displayed,” said Jan Palmowski, secretary general of The Guild of European Research-Intensive Universities.

He pointed to the Commission’s actions on the EU’s Horizon 2020 R&D programme and Erasmus+ academic mobility programme, for which he said universities have had to deal with “very immediate and very human concerns from Erasmus students needing to be repatriated very quickly”.

On the potential plans to reorient projects, Palmowski said it “needs to be down to scientific judgement to what extent this is sensible and adds value…so that clearly needs to be decided carefully, on a case-by-case basis”.

The Commission has fast-tracked funding into various R&D projects related to Covid-19. On 26 March, it announced that supercomputing centres in Bologna, Italy; Barcelona, Spain; and Jülich, Germany, will receive €3 million for research on vaccine development, treatment and diagnostics.

It is also seeking to protect European biotechnology research capacities from foreign takeover attempts, with the value of many companies’ shares having plummeted during the pandemic. On 25 March the Commission published guidelines for screening foreign investments to ensure that the EU retains control of critical companies.

“If we want Europe to emerge from this crisis as strong as we entered it, then we must take precautionary measures now,” said Commission president Ursula von der Leyen. “As in any crisis, when our industrial and corporate assets can be under stress, we need to protect our security and economic sovereignty.”

Other EU initiatives continue to be pushed back as Covid-19 work takes priority. On 26 March the European Strategy Forum on Research Infrastructures, which advises on funding allocations, said it had extended the deadline for proposals for its next infrastructure roadmap to 9 September.

The same day, Plan S—the initiative in which a group of mainly European funders will require the researchers they support to make their work openly available immediately from 2021—said it will delay an update on journal compliance until 10 April.