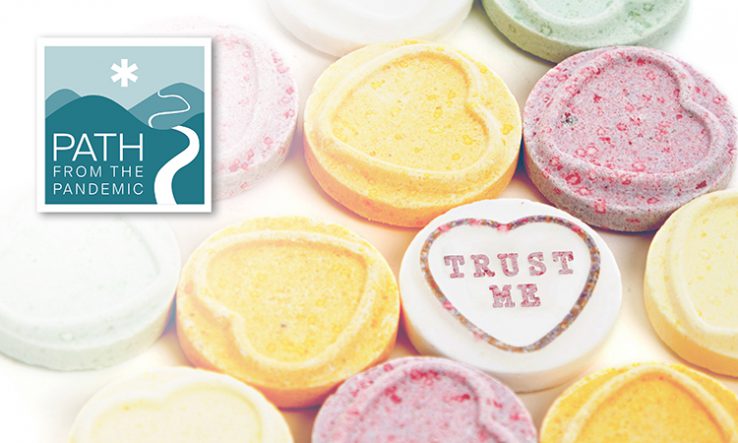 Covid-19 could make researchers more trusted by the public, or damage their reputations significantly

After more than a year of the Covid-19 pandemic, Tracey Brown has noticed increasing signs that people are tiring of experts.

“There’s definitely a strong feeling there that ‘I’m just fed up of scientists all over the news’,” says the director of the nonprofit Sense about Science, which advocates for the public understanding of science and the use of evidence in policymaking.

Trust in research, and in those who create it, has played a crucial role in how the pandemic has evolved. It has been at play in the response of politicians to scientists’ modelling of the effects of various virus strains and pandemic interventions, and in the public’s readiness or otherwise to submit to social distancing, curfews, travel bans and vaccination.

Researchers, acting formally as government advisers or informally as self-directed communicators and concerned citizens, have gained prominence and even adoration at times. But, at the opposite extreme, they have also suffered infamy and death threats.

A year and a half on from the appearance of Covid-19, and with life returning to a semblance of normality in some parts of the world, some researchers are turning to how the pandemic might affect trust in science in the long term, and how they might be able to shape those impacts for the better.

Covid-19 has caused a surge in public interest in science, putting researchers and their work under the spotlight. That attention has been both novel and intense.

“Broadly people are very aware of the value of scientific research—and that’s quite new,” Brown says. She believes the trend has been greatest for more abstract fields such as mathematics, describing the subject as a “last bastion” failing to see the importance of public engagement before the pandemic. But even obscure fields have been transformed by public attention to topics such as epidemiological modelling and vaccine efficacy.

The role of scientific advice has also increased awareness of how science informs policymaking. Commentators say it is difficult to judge the performance of specific science advice mechanisms, but that generally advisers have succeeded throughout the pandemic in ensuring evidence has been given due attention by decision makers.

But a heightened focus on expertise has also put some researchers in the tricky situation of having to defend unpopular policies or being blamed for political decisions.

What affects whether an expert is valorised or vilified? Hugo Mercier, a researcher at France’s National Centre for Scientific Research (CNRS), says a focus on boosting research quality and eliminating bias—such as through improved standards for statistics and requirements to disclose conflicts of interest—should “make science more trustworthy”.

Gloria Origgi, another researcher at the CNRS who is studying science advice systems, says questions of trust in science turn not on whether experts are qualified, but rather on the transparency of advisory bodies, which vary in how much information they release to the public.

“Opacity can have consequences for the trustworthiness of the whole process,” Origgi says. One issue she highlights is how people are appointed to advisory bodies, which sometimes is not made public. She believes “a more transparent process, a more inclusive, diverse way of composing these committees would surely improve trust in science”.

Origgi also foresees students and young researchers taking more of an interest in communication skills, and thinks science communication will be a hot topic for the next few years.

Many scientists, particularly those involved in health research, have been forced to improve their communication over the course of the pandemic, but efforts to get through to the public are still hit and miss.

“Scientists are really bad sometimes at realising where everyone else is starting from,” says Brown.

She doesn’t expect every scientist to have great communication skills, but says all academics can improve their communication by following a simple rule: not patronising the public. “Ridicule is a big turn-off.”

Brown acknowledges that trying to convey information to members of the public who might have entrenched views can be frustrating for scientists—especially in the maelstrom of social media—but urges them to remember that people know when they are being talked down to.

An umbrella body for learned academies issued similar advice in a discussion paper on scientific disinformation it published this month. The European Federation of Academies of Sciences and Humanities said researchers should build trust through good research practices and high ethical standards, but also by demonstrating “intellectual humility” and avoiding “overselling science” when communicating evidence.

Covid-19 looks likely to change many aspects of life irreversibly, but most experts are wary of declaring the pandemic a win for trust in science just yet.

Some studies have shown a positive effect. The Luxembourg National Research Fund reported this month that 70 per cent of respondents to a survey said they trust science and research, up from 67 per cent in 2019. The number of people who “absolutely trust” researchers also increased, from 14 per cent to 20 per cent.

But a January report in the Journal of Public Economics struck a less positive note (see Lessons from history). Barry Eichengreen and his colleagues looked at previous pandemics and concluded that experiencing a pandemic “has no impact on views of science as an endeavour but…significantly reduces trust in scientists and in the benefits of their work”.

Experts say they will be keeping an eye on other markers of trust in the coming months. But many are refusing to call the glass half-full just yet.

“It is probably correct to say people are more aware of science, whereas if they are trustful, we will see,” says Origgi.

Ultimately, whether they are trusted or not, scientists are likely to crowd the airwaves for some time.

In a Journal of Public Economics paper, researchers Barry Eichengreen, Cevat Giray Aksoy and Orkun Saka say it is not clear if the pandemic will change trust in science.

“If past epidemics are a guide…members of the public will continue to believe that science has the potential to improve society,” they say in the paper, published in January.

“However, [the pandemic] will reduce trust in individual scientists, worsen perceptions of their honesty, and weaken the belief that their activities benefit the public.”

Path from the Pandemic

The Path from the Pandemic initiative from Research Professional News is focusing on six critical areas where momentum is building for long-term change in the wake of the pandemic. These are: financial sustainability; a fairer sector; online opportunities; international partnerships; open research; and trust in science. Through the initiative we hope to help the sector explore a sustainable way forward. Have your say: #PathFromThePandemic on Twitter or email news@researchresearch.com.