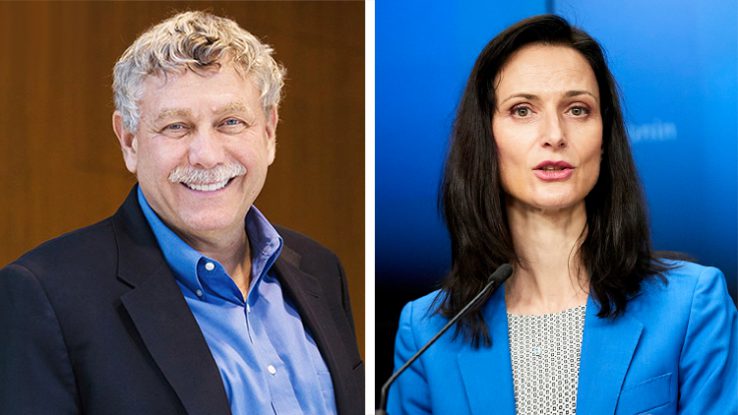 A global group of science leaders has urged the Chinese government to reconsider its decision not to support a planned further probe by the World Health Organization into the origins of the Covid-19 pandemic.

The EU research commissioner Mariya Gabriel, the US chief science advisor Eric Lander (pictured right and left respectively), Australia’s chief scientist Cathy Foley and a trio of advisers to the Japanese government—Ueyama Takahiro, Matsumoto Yoichiro and Kano Mitsunobu—all backed the plea, which some of them shared on social media on 27 July.

“As science advisers and officials, we unite to call on the Chinese government to reconsider its decision to not engage in the World Health Organization’s proposal for the next phase of the Covid-19 origins study,” their statement said.

“China’s full participation in this scientific examination is a matter of critical importance to the world [and] China has a shared responsibility to help the world learn from crises and to uphold long-held and agreed norms around scientific integrity.”

Following a trip to Wuhan, where the virus causing Covid-19 was first detected, WHO experts said in March it was “extremely unlikely” that the virus emerged from the Wuhan Institute of Virology—a suggestion pushed by the administration of former US president Donald Trump. But on 15 July, WHO director general Tedros Adhanom Ghebreyesus said there had been a “premature” push to rule the theory out.

“We are very much interested in discovering where this virus came from and I would also like to call on our Chinese colleagues, that we will be able to continue in this investigation to lead to scientific results,” Tedros said.

But on 22 July a senior Chinese official said the country rejected a WHO plan for including the possibility of a lab leak in further study into the origins of the pandemic. Its vice-minister of the National Health Commission, Zeng Yixin, said it would be “impossible” for China to accept such a plan.

Gabriel and the other leading global figures said they supported the WHO plan, and called on the international scientific community to “come together in its pursuit of a better understanding” of the pandemic. They said it was necessary to properly understand the origins of public health emergencies to better prepare for and avoid such emergencies in the future.

However, on 28 July a spokesperson for the Chinese mission to the EU was asked about the plea describing and said: “We firmly oppose the practice of political manipulation in the name of open and transparent scientific study,” and that “politicising the origins study [had] deliberately disrupting international cooperation on global origins tracing”.

The spokesperson said China had “always taken a scientific, professional, serious and responsible attitude in tracing the origins of the virus” and called for others to “adopt a truly responsible and scientific attitude, and work with the international community to make due contributions to defeating the virus and protecting people’s health and well-being”.

On 23 July, a foreign ministry spokesperson said China “categorically rejects” claims that it was “stonewalling” other countries in the investigation and that China “attaches great importance” to origin tracing and will continue its own investigation.