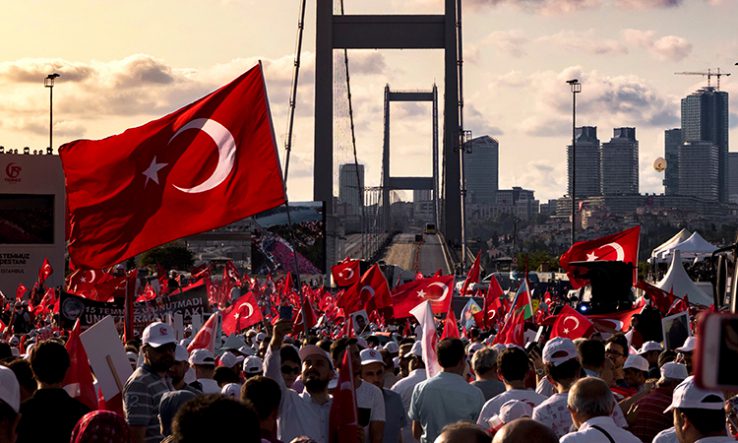 Dismissal, exile and imprisonment drove Turkish researchers to build their own academies

Yücel Demirer should have been teaching in September 2016, but instead he began the month sipping tea in a café in Kocaeli, an industrial city close to Istanbul.

A softly spoken, unassuming man, he was one of more than 2,000 Turkish academics who were fired and banned from working
after signing a petition opposing state violence against Turkey’s Kurdish minority in January 2016.

“It’s kind of an awkward feeling,” he tells Research Europe.

But then Demirer’s former graduate students began to turn up at the café with questions about their papers. “Gradually, they started to invite my dismissed colleagues, and without knowing, we started to conduct committee meetings in local coffee shops,” he recalls.

The meetings grew to become the Kocaeli Academy for Solidarity, or KODA.

Supported by a grant from the EU’s EuropeAid programme, the academy comprises 19 former Kocaeli University staff, and offers an audience of former students and interested locals instruction in everything from democracy to self-defence. Its funding source enables it to pay teachers according to their needs, with younger, less secure scholars getting more.

Being thrown out of the “extremely hierarchical” Turkish university system “created a kind of experimental environment for all of us”, Demirer says of himself and other dismissed teachers—or “Robinson Crusoes”, as he calls them.

Like Demirer, many signatories to the petition have been trapped in Turkey since having their passports withdrawn. But some managed to leave beforehand, with many ending up in Germany.

Betül Yarar, a former gender studies researcher at Gazi University in Ankara, Turkey’s capital, had a red cross painted on her front door by extreme nationalists after she signed the petition.

This traditional death threat prompted Yarar to leave Turkey for France, from where she won an academic position at Bremen University in Germany, supported by the Alexander von Humboldt Foundation’s Philipp Schwartz Initiative.

Muzaffer Kaya, another exiled Turkish academic in Germany, is also supported by the Philipp Schwartz Initiative. As well as his research into the politics of Turkish expats in Germany, he works for Academics for Peace, the organisation that published the petition.

Kaya, who spent two weeks in solitary confinement in a Turkish prison, because he signed the petition, says the protest was the justification the ruling Justice and Development Party (AKP) needed to reform Turkish academia along loyalist lines. “We gave them a list of people who can be dismissed,” he says.

The roles made vacant by the AKP’s intellectual purge have been filled by young scholars trained at universities swiftly set up by the current administration, Kaya says. Instead of institutional elections, Turkish rectors are now appointed by the government.

Kaya and his colleagues at Academics for Peace give public lectures to some of the three million other Turkish expats living in Germany, who Kaya says tend to lean conservative and vote for the AKP.

While Demirer and his colleagues taught their first self-organised seminars, a group of German and Turkish academics were meeting in Berlin’s Lefter Records, an academic-run shop specialising in Turkish music.

Among them was Tuba Çekiç, who works on urbanism. “We decided to do something for people who are stuck in the country,” she says.

The resulting Organisation for Peace, or OFF University—its abbreviated German title—is legally a non-governmental organisation, rather than a higher education institution, but its founders want it to fulfil all the roles of a university.

An online platform, OFF University allows academics, such as those who have lost their jobs in Turkey, to teach online courses to students who would otherwise lack access to higher education. Instructors pitch courses to the university, with those who are successful offered a one-semester, five-month contract worth €5,000.

OFF University has its costs covered by a group of charities, including Germany’s Rosa Luxembourg Foundation.

Çekiç, who is the secretary of OFF University, hopes to attract participants in other regions that restrict higher education, such as the Middle East, Central Europe and Central Asia. OFF University is also adding collaboration software so it can facilitate research, as well as teaching.

Çekiç, Kaya and Yarar are all unsure whether or when they will feel comfortable enough to return to Turkey. The county’s constitutional court has ruled that the conviction of the petitioners violated their freedom of speech, but that ruling has yet to be supported by local courts, many of which have close ties to the government.

Turkish universities put out statements condemning the ruling, while loyalist academics signed petitions denouncing it. “It is a shame some professors think their colleagues should be imprisoned,” says Kaya.

As a political scientist, Demirer says he finds it hard to share the optimism of colleagues heartened by last year’s loss for the incumbent AKP in the Istanbul mayoral vote. “I know too much to be optimistic,” he says.

“I’m not sure I would be able to go back now,” says Çekiç. “I have a daughter; we are almost settled.” Despite the shoots of a new life, being away from home will always hurt. “If someone dies, you are not able to go—this is being in exile.”

July 2016 A failed coup leads president of Turkey, Recep Tayyip Erdoğan, to issue an emergency decree dismissing thousands of academics from their roles, forbidding their future employment and withdrawing their passports