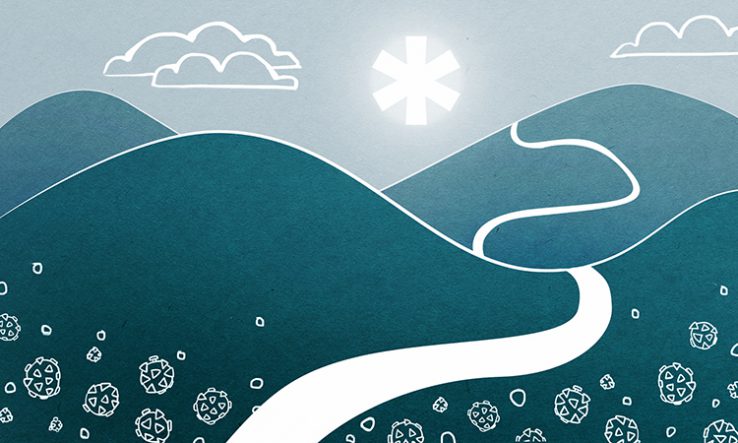 A year after Covid-19 engulfed Europe, we explore what must change in the pandemic’s wake

On 13 March 2020, the director general of the World Health Organization, Tedros Adhanom Ghebreyesus, warned that Europe had become “the epicentre” of the Covid-19 pandemic.

A year on, R&D and higher education organisations are still struggling with lockdown restrictions, facility closures and funding woes, as well as the tragic deaths of many staff and students.

Beyond these direct pressures and losses, calls for long-term change are growing as Covid-19 highlights the underlying unfairness and inadequacy of existing systems.

Over the coming weeks and months, Research Professional News will be focusing on six critical areas where momentum is building for long-term change in the wake of the pandemic, promoting discussion and debate. Through our Path From the Pandemic initiative we hope to help the sector explore how to recover and rebuild in a way that is sustainable and fair.

It is still too early to say that universities have seen the worst of the pandemic or to truly understand how badly it will hit their finances.

Despite a decrease in income from international student fees affecting many institutions’ budgets, the sector has shown itself to be “remarkably resilient”, says Jan Palmowski, secretary general of the Guild of European Research-Intensive Universities.

But the shift to remote working has brought additional costs, as has the need to implement safety measures for facilities that remain open.

Erasmus University Rotterdam alone spent €20 million extra in 2020 as result of the pandemic, contributing to an annual budget deficit of about €46m. In January, Research Europe revealed that the five universities in the Dutch-speaking region of Belgium faced pandemic-related costs totalling €21m, while nine universities in the German state of Baden-Württemberg expected extra costs of €37m.

Even before the resurgence of the virus, last year the French Conference of University Presidents warned that health and safety would claim 2-3 per cent of university budgets.

Now a new wave of virus cases is sweeping many European countries again. And the scale of the longer-term hit to public finances, which support much university research, is unclear. Set against this, though, is huge recovery spending both nationally and at an EU level, a sizeable portion of which is earmarked for research and universities.

Amanda Crowfoot, secretary general of the European University Association, says there is “cautious optimism” among universities despite uncertainty about when the pandemic will end. “[We could] see something from September onwards that looks more like ‘normal’ as we know it,” she says.

While institutions try to weather the storm, the pandemic continues to damage individuals, in particular doctoral students and early career researchers.

Many are still waiting to return to labs and archives after months with their work on pause. Deadlines are looming and funding is running out.

Some researchers supported by the EU’s Marie Skłodowska-Curie Actions mobility scheme have been especially vocal about what they see as a lack of support to help them through the hardship.

In two cases brought to the EU ombudsman, MSCA researchers said their careers, personal lives and mental health had suffered because they have not been offered extensions of grant funding. The European Commission says it lacks the legal power to extend deadlines in the case of most MSCA grants.

Covid-19 has been hit especially hard for those with caring responsibilities and people who don’t have reliable conditions for working from home.

Many studies have found that women have been hit harder than men by the impact of the pandemic. This ranges from women suffering a bigger reduction to their publication rates to suffering more from budget cuts.

Similar studies exist showing ethnic minorities taking more of the strain than those from white backgrounds.

Palmowski says the situation “reinforces a sense of urgency” around diversity. “I don’t think it’s something that was caused by the pandemic, but inequalities have been laid bare by the pandemic.”

One area where the sector has excelled is in taking physical lectures and collaborations that were reliant on face-to-face interaction and making them work online.

“One year on, things that were being done ad hoc at the start of the pandemic are much more embedded in institutions,” says Crowfoot. She says the pandemic may have long-term positive effects for universities’ digital offerings.

While there is broad acknowledgement that some aspects of face-to-face interactions are irreplaceable, there is also agreement that Covid-19 has prompted the sector to reconsider environmentally damaging long-haul flights for conferences and pushed universities to make hybrid learning a reality.

Institutions have already shown an appetite to build on these gains. A 2020 survey by the EUA found that three-quarters of institutions want to enhance their digital learning capacity.

“The question is how we support this in sustainable ways—in many systems there won’t be more money and we have to somehow include support for digital [means] in existing resources,” Palmowski says.

Some also fear that those already disadvantaged may suffer from a shift to hybrid modes, with the poorly funded and overworked people stuck in second-class online seminars, while the existing elite network their way to greater power at in-person meetings.

But the shift to online work hasn’t dampened the appetite for international study, says Palmowski. “We haven’t seen the catastrophic slump in mobility predicted at the beginning of the pandemic,” he says, adding that some universities have seen an increase in mobility, if virtual mobility is factored in.

Although it has physically isolated institutions, the pandemic appears to have strengthened bonds between many of them.

Now that nearly everyone is working online, and attendance at meetings and seminars hinges much less on geographic proximity, researchers in Brussels can form links with those in Beijing almost as easily as those in Bruges. In one case Science Europe, the association of research funders and performers, started a collaboration with the National Natural Science Foundation of China based entirely on such virtual interactions.

“Covid has increased the need for universities to discuss pandemic challenges and solutions with networking partners in Europe and beyond—and increased the appreciation of academic networks,” says Martin Paul, president of Maastricht University in the Netherlands and chair of the Young Universities for the Future of Europe alliance.

The pandemic has also led to gains for the open-science movement. As many EU countries began lockdowns, publishers acted too, making Covid-19 content freely accessible without embargoes.

Open-research advocates are hopeful that researchers can carry the Covid model to other pressing issues, such as research on medical treatments and climate change, and eventually even more broadly.

With the behemoth funder-backed initiative Plan S still driving publishers towards open access in the background, Covid-19 could be a final push towards free-to-read research.

Or it may not: Shawrav is concerned that such steps may be limited and temporary. “We hope this will not be a trend restricted to Covid-19 only,” he says.

“It has propelled scientists into a spotlight that they have never had before—I have never seen so many scientists on TV,” says Lidia Borrell-Damián, secretary general of Science Europe.

Fears of a backlash against science advisers have simmered in many nations though, and inquiries into how governments dealt with the crisis will throw scrutiny on advice mechanisms that have never had to endure it before.

But Borrell-Damián hopes this newfound prominence will translate to greater trust in researchers and their findings, which may be needed as policies increasingly turn to tackling climate change after Covid-19 is under control.

“The pandemic is sparking a greater level of consciousness on all the challenges ahead of us—it is raising the level of awareness of fragility of us as humans and of the whole planet,” she says.

The path from the pandemic

Many researchers and students are eagerly awaiting a post-pandemic future. But academic leaders say they are guarding against complacency and stressing the need for long-term planning and sustainable development.

Universities need to remain nimble to head off new challenges, says Palmowski, who warns: “We’d be ill-advised to assume this is a once in a lifetime occurrence.”

Shawrav agrees: “You don’t know when another crisis is around the corner.”

Path to a pandemic

22 January 2020 WHO director-general convenes an Emergency Committee to assess if Covid-19 should be declared “a public health emergency of international concern” (PHEIC). No consensus is reached.

30 January 2020 Emergency Committee is reconvened and advises that the outbreak is a PHEIC.

Follow our Path From the Pandemic coverage on www.researchprofessional.com and in Research Europe. Have your say on Twitter #pathfromthepandemic