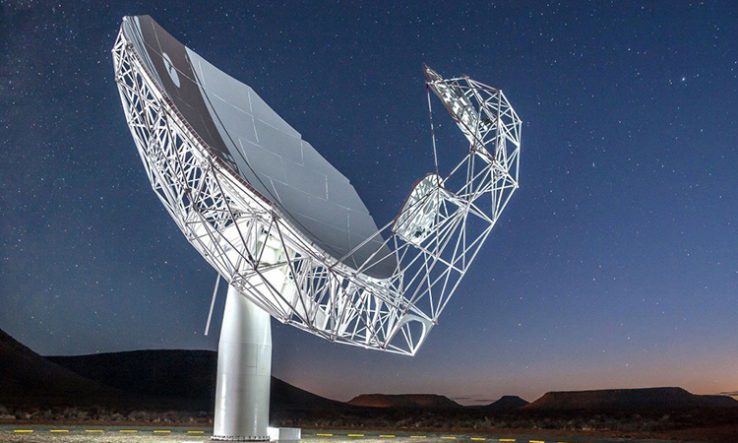 Sign-off on the astronomy megaproject is a moment for both celebration and realism, says John Womersley

It is fantastic news that the international convention for the Square Kilometre Array telescope has gained enough signatories to come into force. One of the most exciting science projects of our era can now begin construction, with firm commitments from its members and partners.

I have supported the SKA for over a decade. As chief executive of the UK Science and Technology Facilities Council, I worked with science ministers David Willetts and Greg Clark to secure UK funding, and to successfully bid to host the telescope’s headquarters at the Jodrell Bank radio observatory in Cheshire.

The project should be transformative in three ways. First, scientifically, by allowing us to explore the structure of the universe with unprecedented precision and look back to a time before the stars and galaxies even formed.

Second, technologically, because it is as much a data project as an astrophysics project. Its demands on signal processing and computing will stimulate innovation that is sure to have broader impact.

Third, politically, because in basing components in up to nine nations in sub-saharan Africa, it is one of the first megascience projects to involve emerging nations as equal partners, and one of the first to bring big science to the continent.

It’s taken a while to get to this point, and many will ask whether the time taken to put an international treaty in place was worthwhile. I believe it was—when I served as chair of the SKA board, members discussed a number of alternatives, but this was the almost unanimous choice.

After all, a treaty provides security and commitment for all partners and for the scientific community, and safeguards the operation of a facility spread across three continents in a way no other legal framework could.

That said, I want to see the SKA’s membership continue to expand. For that reason, I’d encourage its management to offer, just as we do at the European Spallation Source (ESS), some kind of associate membership for countries—not least the United States—where funding agencies can make international agreements but lack the authority to sign a treaty.

Another lesson for the SKA from other big projects is to now move rapidly to put concrete investments (literally) in place. After many years of R&D it’s important to show that things are moving ahead.

At the ESS, we developed a collaborative contract with our construction partner Skanska that allowed building to begin before all the detailed designs were complete. This was crucial in showing progress on the ground, and also became a reason to cut short the cycles of technical design work, go ahead with good-enough solutions and avoid an endless pursuit of perfection.

The SKA, like the ESS, relies on laboratories and institutes in member countries to deliver a large fraction of its high-technology equipment in lieu of financial contributions. This makes perfect sense, because it allows projects to tap into centres of excellence and funded engineering teams across the member states.

However, it also brings challenges. For example, who is responsible for risk and contingency? What if one of these in-kind deliverables turns out a lot more expensive than anticipated? Who’s responsible for rework if there are quality control issues; who can decide if the specification needs to be varied; whose safety standards are being followed; how will all of this be communicated; and who is ultimately responsible for installation, commissioning, and sign-off? The SKA and its partners will need clear answers to all these questions.

Finally, any project just starting construction but especially now, with the impacts of Covid-19 yet to be contained, needs to align the expectations of management and member states as to its true cost—or rather, how much can be delivered within the funding envelope that is realistically available.

I have never, ever, worked on a science megaproject that did not set out with an over-optimistic view, usually from both management and funders, of how much it could do with so little money. At some point, everyone starts to realise that the situation is more like how little can be done with so much money, and disillusionment can result.

Here’s an opportunity, then, for SKA to learn from the past and go into construction, eyes wide open, with an understanding of these challenges.

I’m sure that none of this will be news to the SKA team. I have huge confidence in their ability to manage this project professionally and successfully. Of course, delivering any cutting-edge science megaproject is a huge challenge, but that’s why we do it.

John Womersley is director-general of the European Spallation Source in Lund, Sweden. He chaired the founding board of the SKA Organisation