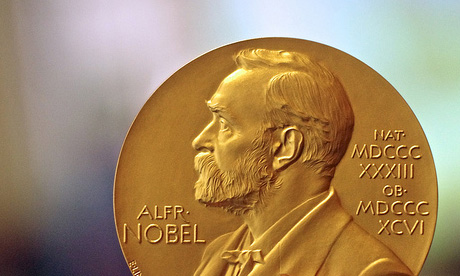 The Nobel prizes embody three narratives about the role of elite scientists in society—and they came along at just the right time, says Massimiano Bucchi.

In the autumn of 1996, a UK research council committee rejected a funding application from Harry Kroto. Two hours later, the Royal Swedish Academy of Sciences called to say that he and two colleagues had won the Nobel prize for chemistry for their discovery of fullerenes; the same subject as the grant application.

The research council swiftly reversed its decision. The British chemist had now entered the small circle of ‘visible scientists’, the elite on whom awards such as the Nobel prize confer almost unassailable prestige and a reputation able to open every door.

This and similar dynamics were described by Robert Merton, founder of the sociology of science, as the ‘Matthew effect’, from the passage in Matthew’s Gospel that states: ‘For unto every one that hath shall be given, and he shall have abundance: but from him that hath not shall be taken away even that which he hath.’

Those in positions of visibility and prestige get privileged access to further resources and prestige, and so on. As one Nobel prizewinner for physics put it: “The world is peculiar in this matter of how it gives credit. It tends to give the credit to [already] famous people.” Or in the words of the Abba song: “The winner takes it all.”

I first visited the Royal Swedish Academy of Sciences in 1998. Ever since, I have been studying how the Nobel prize shapes the public image of science—and scientists. The prize announcements are one occasion when science makes global headline news, reaching audiences that are quite distant and not much interested in science. ‘Nobel’ has become a metonym for scientific genius and success.

As another sociologist, Harriet Zuckerman, noted in her 1977 book Scientific Elite, “[the Nobel’s] influence on the public’s image of science probably counts for more than its function as incentive for scientific accomplishment”.

The narrative of genius emphasises the scientist’s creativity and intellectual exceptionality, reflecting a solitary and romantic ideal. The narrative of the national hero allows the Nobel laureate to speak in the name of a nation, surrogating and sublimating the tensions and rivalries between nations into a more peaceful and noble competition. The narrative of saint incarnate—a focus of attention and worship, celebrated and consecrated through the elaborate ceremony ritual—is an update of the traditional ideal of the scientist as a secular ascetic.

In terms of the public image and social role of science, the Nobel was the right prize at the right time.

When the first prizes were awarded in 1901, science was already becoming more complex, organised and impersonal. The narrative of genius allowed a focus on individual contributions, figures and faces.

At the same time, the struggle and competition between nations was finding a peaceful alternative in arenas such as the Olympic games and universal exhibitions, and science was beginning to be seen as an expression of national strength. The Nobel prizes offered an opportunity to express political rivalry by other means, especially as they were based in neutral Sweden.

And as the moral exceptionality of scientists began to be questioned, and research was increasingly defined as a profession rather than as a vocation, the prize gave a new language to scientific virtues such as modesty, humility and dedication to the scientific enterprise.

For the general public, science largely remains abstract and inscrutable. The Nobel prize contributed to giving science a face, creating a rich and fascinating repertoire of stories. Alfred Nobel held 355 patents, but the prize founded in his name was his greatest invention.

To quote John Polanyi, speaking at the Nobel banquet after winning the 1986 chemistry prize: “We applaud you, therefore, for your discovery, which has made a memorable contribution to civilisation—I refer, Your Majesties and our Swedish hosts, to the institution of this unique prize.”

Massimiano Bucchi is a sociologist of science at the University of Trento, Italy. He is giving the UCL Haldane lecture on Wednesday 23 January in London. You can book a place here.