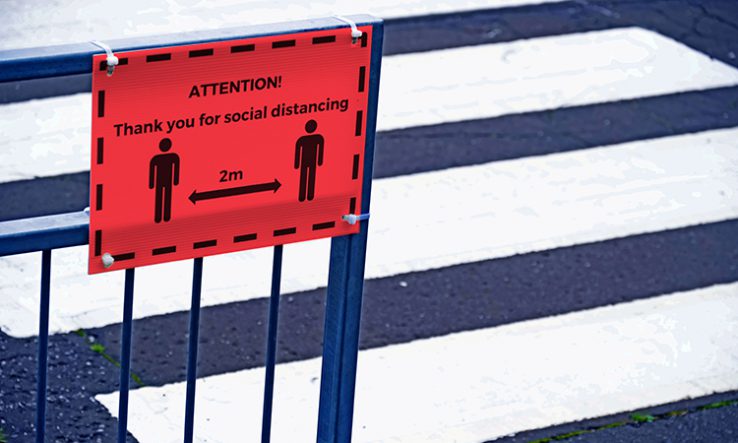 The huge uncertainties and anxieties affecting the research sector due to Covid-19 have been laid bare by a Research Professional News survey.

From job fears to funding woes, researchers’ responses to the survey highlight how the pandemic has changed work and personal lives, and fundamentally altered perceptions of institutions and careers.

More than 300 readers across the UK answered questions on their jobs, career prospects and research funding. Respondents were most concerned about job security and access to labs, but also about funding and their ability to meet deadlines in light of disruptions (see key survey results in graphs here). 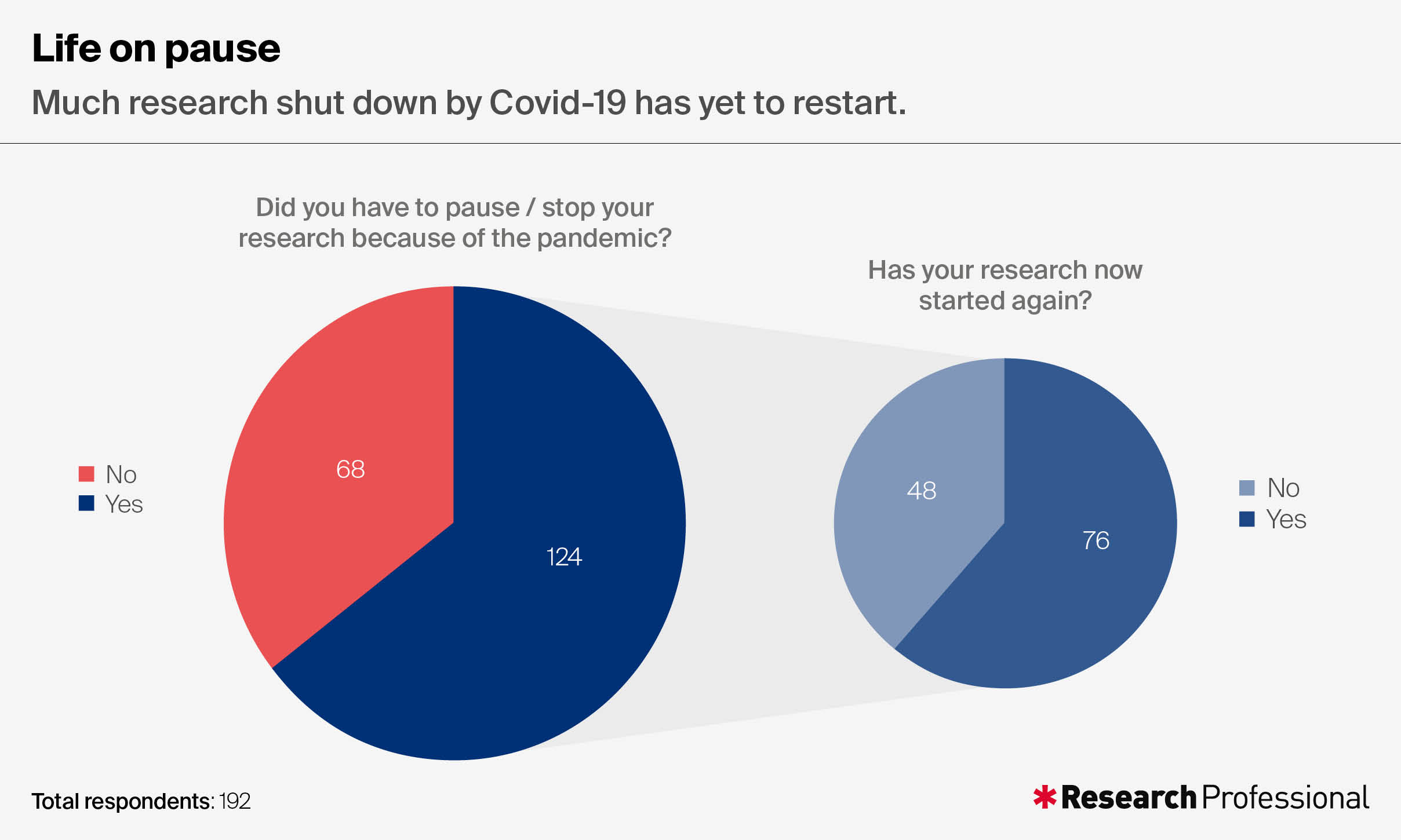 Most respondents, 65 per cent, said they were forced to pause their research because of the pandemic, with a quarter of those who paused work yet to restart it.

Many labs closed for months following the national lockdown that started in March, and have only been reopening slowly. Travel and fieldwork have also been hit hard.

Responding to the survey, one academicat a Scottish university said their institution had been “too slow getting research staff back and too keen to get students back”.

Several organisations, including the Russell Group of research-intensive universities have recently highlighted the slow pace of restarting non-Covid research in the UK.

For example, the National Institute for Health Research announced its strategy to reopen clinical trials back in May but as recently as 19 October it said that fewer than half of NIHR studies were open to recruitment and 51 had to close altogether.

“It is important that restarting studies is done in a sustainable way, particularly as Covid-19 cases are increasing again,” William Van’t Hoff, chief executive of the NIHR Clinical Research Network told Research Fortnight. “While we remain in a pandemic, Covid-19 research must be our priority, but we are working very hard with the NHS to support and deliver research across all specialties, throughout the country.”

On 29 October, the government announced £88 million in support for lab infrastructure, with much of that going towards making spaces safe in the months ahead.

But many of our respondents worry more about making student areas safe, which they see as even riskier than labs for transmission of the virus. 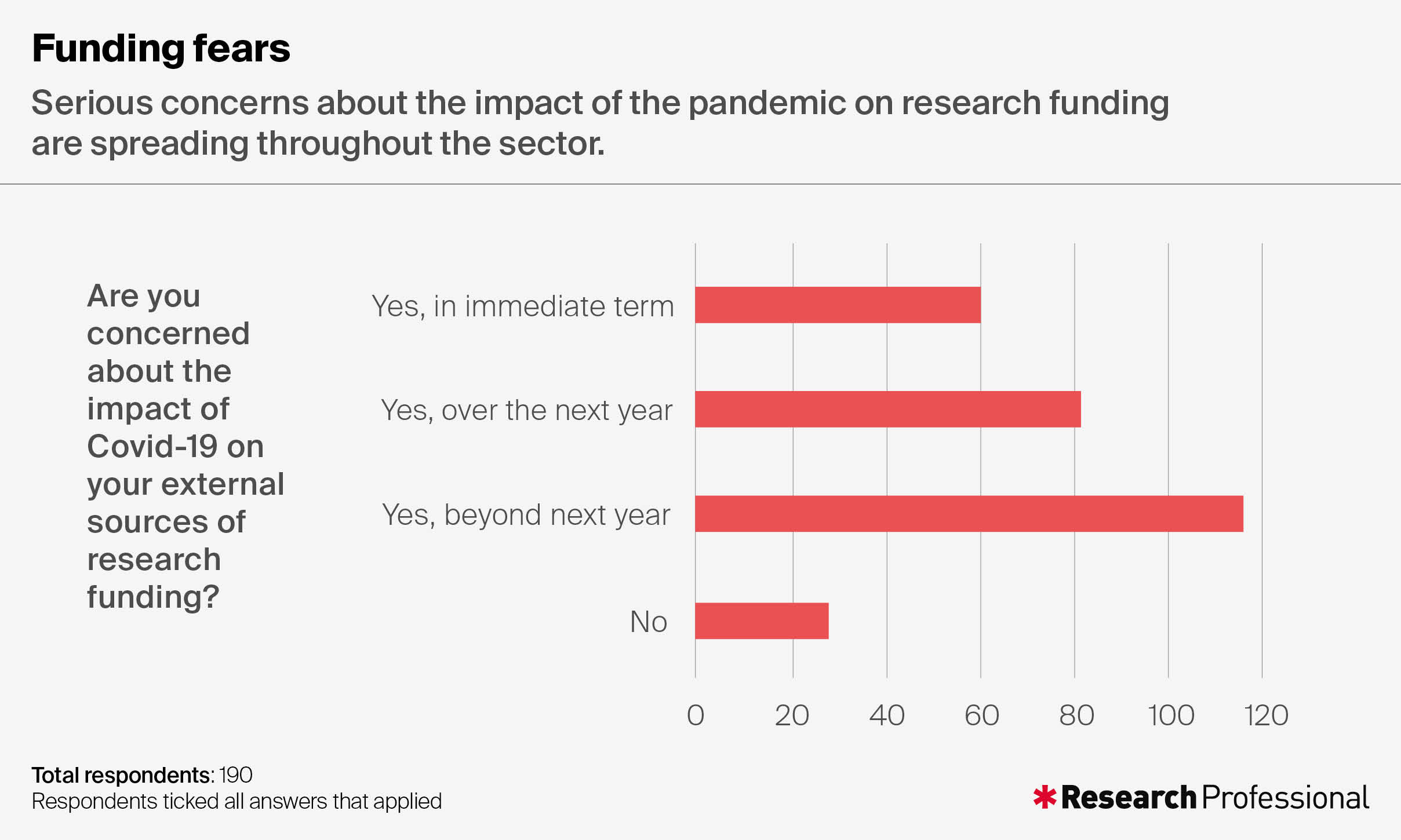 With the second wave now in full swing in the UK, it looks ever more likely that the sector will need to ‘learn to live’ with the virus. A number of campuses have seen major outbreaks since students returned, despite taking precautions.

“It is difficult to think about any long-term research impact under these circumstances, when the immediate conditions are so overwhelming,” said one academic at a campus that has had a major outbreak.

Several respondents say they feel pressured to return to campus and to teach face to face, despite the risks.

Many universities have set up dedicated testing facilities, but routine testing of non-symptomatic staff is still not taking place in most locations. More than 95 per cent of our respondents say they have not been tested via their institutions.

The same proportion is worried about Covid-19 spreading among staff given students’ return to campuses, and 78 per cent believe their campus cannot be made ‘Covid-19 secure’.

On average, our respondents gave their institutions a 3.5 out of 5 rating for their responses to the pandemic so far, with most generally happy with the advice and support they have received.

But one staff member, while praising their university’s response, said: “The mixing of students with staff and graduate demonstrators in labs is the danger zone…which may have knock-on impacts on research.” 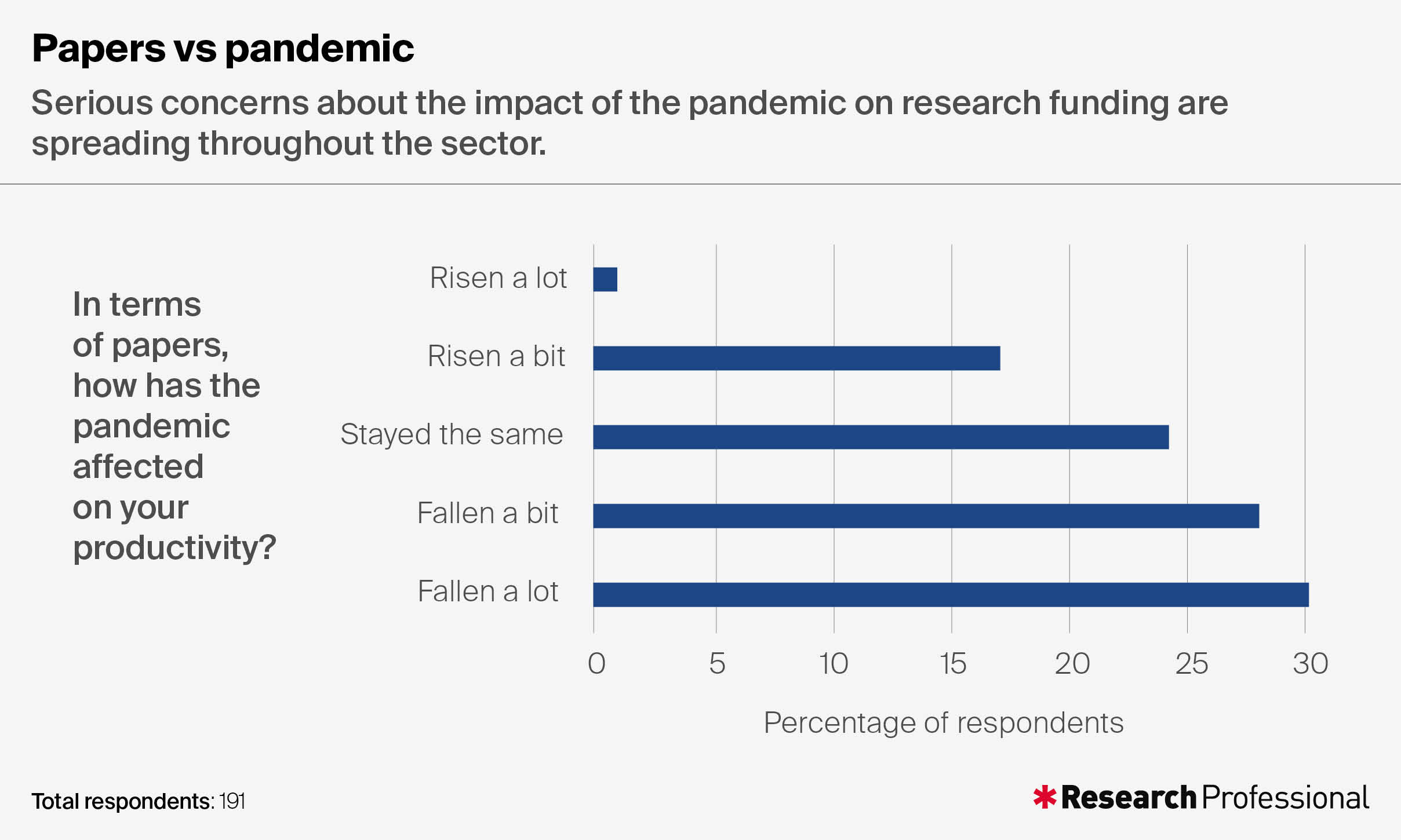 Beyond having to halt research, 71 per cent of respondents say they are concerned about the impact of Covid-19 on their funding. More than a third have been asked to reduce or reprofile their spending on current research.

This comes as fears grow over the impact of the prolonged crisis on the UK economy, with chancellor Rishi Sunak twice shelving long-term spending plans, while he plots shorter-term budgets. These moves have led many to worry whether the government will be able to deliver on its promises to more than double R&D funding over this parliament to £22 billion a year.

With projects paused or axed, careers are at stake, too. The higher education careers organisation Vitae found recently that research leaders estimated that a quarter of the jobs in their groups could be lost as a result of Covid-19, while the Association of Medical Research Charities found that 45 per cent of early career researchers funded by medical research charities have considered leaving research since March.

With the exception of the UK’s biotech industry, which has seen record levels of investment this year, most sectors face a financial downturn in light of significant disruption to the economy.

For example, a recent report by the Institute for Public Policy Research said there could be an almost £8bn shortfall for medical research in the UK between now and 2027, as hard-hit medical research charities invest less, with a knock-on effect on private sector investment.

One major fund subject to questions about speed of response is UKRI’s Covid-19 rapid-response call first launched in March, which aimed to acknowledge applications within 48 hours and “make decisions within 10 days”. But several researchers reported having to wait for almost three months to get a decision.

The fund rolled back its urgency goals in July, and is to be discontinued in December as the funder shifts to “a longer-term approach as the world learns to live with and manage the pandemic”. 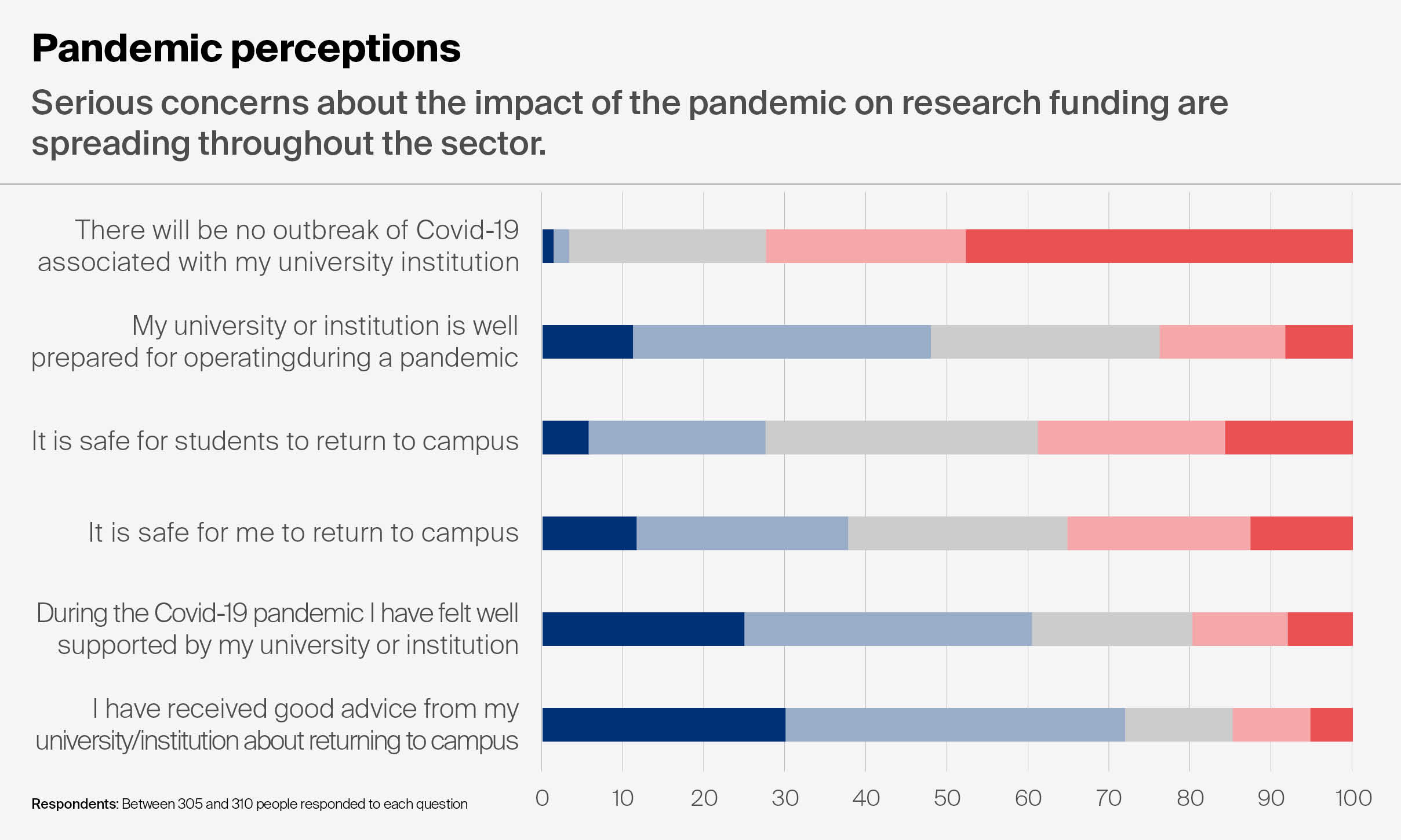 The rate of job adverts for new positions has plummeted. One Russell Group university staff member responding to our survey warned of “job freezes”, saying that “money diverted to dealing with this pandemic has already had an impact on recruitment” and that there will be “fewer research staff in the coming years I think as funding is less available”.

A survey respondent working for a southern university complained of having to use their own equipment for working from home and said they were “expecting a paycut and possibly redundancies/restructuring as a result of Covid”.

Our survey reveals an impact on productivity, too, with most respondents (58 per cent) reporting a drop in the number of papers they have produced.

This has been compounded by some universities shifting much of their work towards Covid-19, with some now fearing this could hurt them in the long run.

With the government’s and funders’ focuses firmly on fighting coronavirus, there have been reports that some institutions have put pressure on their academics to seek Covid funding—even when it is outside of their area of expertise. In our sample, just
under a third of respondents said their institution asked them to apply for funding related to Covid-19.

“I’m in a fortunate and rare…position in being able to obtain funding for Covid-related research early on, and thus my productivity and situation has improved,” said one academic based at a southwest England university. “But most are not so lucky.”

Nancy Rothwell, the head of the Russell Group of research-intensive universities, is now among research figures warning that a focus on Covid-19 projects at the expense of other research could have a negative impact on universities ability to do well in future Research Excellence Framework assessments. This has possible implications for quality-related funding linked to the REF, and with it jobs and other investment in universities.

The immediate future looks bleak for many researchers, some of whom worry about the double whammy of no-deal Brexit and continued fallout from Covid-19.

An academic based at a Scottish university summed up their fears: “The potential for no-deal Brexit, with R&D utterly disregarded, and a second wave of Covid means that we’re facing up to the next year with some trepidation.”