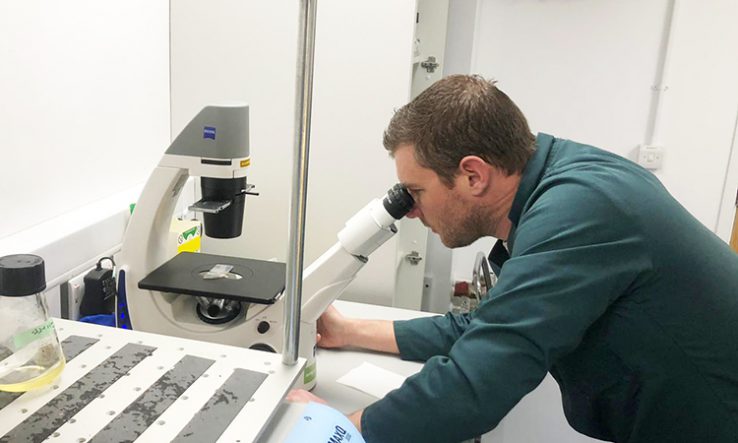 The startup quietly preparing a coronavirus vaccine with no government funding

“We are full on, you know, every weekend, and so there’s no time to lose,” says Frédéric Garzoni, after abandoning Research Professional News’ first attempt to interview him because we missed the scheduled phone call by mere minutes.

The director of Imophoron, a biotech startup at the Unit DX Incubator in Bristol, instead returned to his busy lab, but we manage to reschedule for the following day, a Sunday, in between his lab times.

Garzoni (pictured) is part of the University of Bristol’s 30-strong Uncover group, which he calls “the Covid task force”, but he is also leading Imphoron’s small team in designing vaccine candidates that use a self-assembling “virus-like” particle as a delivery vector.

He explains how his vaccine approach allows only a specific and small part of the virus particle to be exposed to the immune system, which he hopes will reduce potential side-effects.

Garzoni also says the protein vector he is using is heat-stable, meaning it is unlikely to need refrigeration and could be easily shipped and used globally.

“We have successfully produced and purified some of these vaccine candidates and are starting to run the pre-clinical assay within weeks,” he says.

Unlike his colleagues at Imperial College London and the University of Oxford, he has received little media attention, but he is happy with this state of affairs at the moment.

Both the Imperial and Oxford projects are at more advanced stages of vaccine development than Imophoron, he says, and his team has work to do to reach the stage they are at. “Everything needs to be based on data and not hype so we have to assess this very carefully.”

His team now needs to generate more data in preclinical trials. Help with funding to generate these data would be hugely helpful.

But to date he says he has had no contact with the government, its Innovate UK funder or the Vaccine Taskforce that launched on 17 April. Imperial and Oxford’s vaccine projects have been earmarked for £42.5 million in government support.

“It is very good that Imperial and Oxford received that money. My worry is that [we] should not put all our eggs in the same basket [or] two in this case,” he says. “The search for a vaccine is not a sprint but a marathon. We need more runners to stand more chances.”

He suspects the Imperial and Oxford projects may get the spotlight because they are “big, old prestigious universities” rather than a “young start-up”.

Despite dozens of vaccine candidates being developed globally, Garzoni says there are only five or six different technological approaches being taken. If one of them fails, all the others using the same approach might too.

“If you have one per cent chance to make it, then you need to have 100 technologies,” he says.

His research is currently being funded by private investors, and though his project has ranked highly at some previous grant calls he has never won any money from the government.

The most he can hope to get from the £1.25 billion scheme announced on 20 April to support R&D in innovative small enterprises is £175,000, because he hasn’t been a recipient of an Innovate UK grant.

Beyond the government, Bristol’s academic community has been supportive, he says, with the university’s biosafety level three lab available and the local hospital providing patient blood samples to test the vaccine in vitro.

He is collaborating with local teams on running parallel efficacy and safety experiments, and is now also looking for partners that can help mass-produce the vaccine eventually.

The Coalition for Epidemic Preparedness Innovations—which has been strongly backed by UK cash—has been in touch, and he is in talks with them about further funding.

After this crisis passes, he hopes the government will scan for new technologies and support a bunch of them with small amounts of seed funding, instead of just throwing billions of “good money after bad money” in a reactive mode.

“Everybody is now waiting for a vaccine but a vaccine normally takes ten years to develop,” he says. “So we need new technologies.”

“If you look at the next Industrial Strategy Grand Challenges in the UK, health and vaccines and ‘disease x’ are not a priority,” he says.

“There has been some decision being made, where, maybe startups and researchers should have been more involved.”