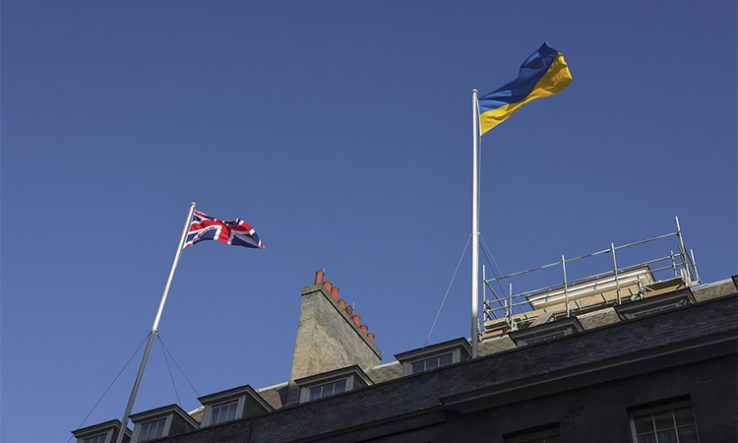 The UK’s academic links to Ukraine have been steadily increasing over the past decade, with British researchers now the sixth most important collaborators with the nation.

As Russia stages an increasingly bloody invasion of Ukraine, attention has focused on academic links to both nations.

Many funders and institutions around the world have declared solidarity with Ukraine and urged the severing of ties with Russia, although Universities UK has said it does not support blanket bans on academic collaboration as a means of protest.

An analysis of articles and reviews indexed in 20,000 journals in the Web of Science shows that Ukraine-based researchers published around 12,000 papers last year, double the tally from 15 years ago. (Web of Science and Research Professional News are both owned by Clarivate.) 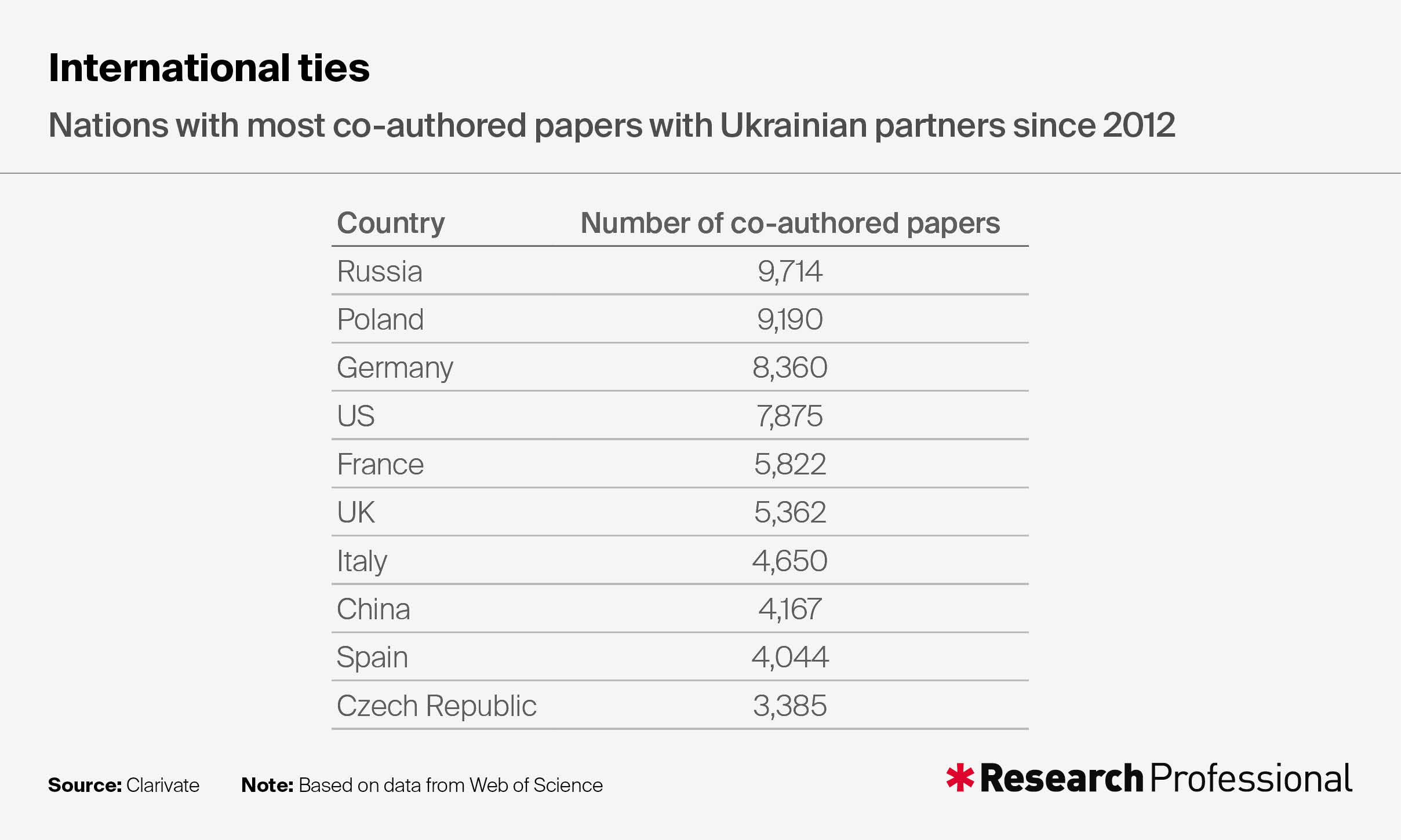 UK links to Ukraine have grown slowly over the past decade. In 2012 there were 391 papers with co-authors from the two nations. By 2021 this reached 592 papers.

“Most of the UK-Ukraine papers are in journals related to particle physics and astronomy,” says Jonathan Adams, chief scientist at Clarivate, “where research projects tend to involve major international collaboration and publications with high authorship counts.”

This is followed by chemistry, interdisciplinary materials science and medicine, and then ecology, nanoscience and mathematics. 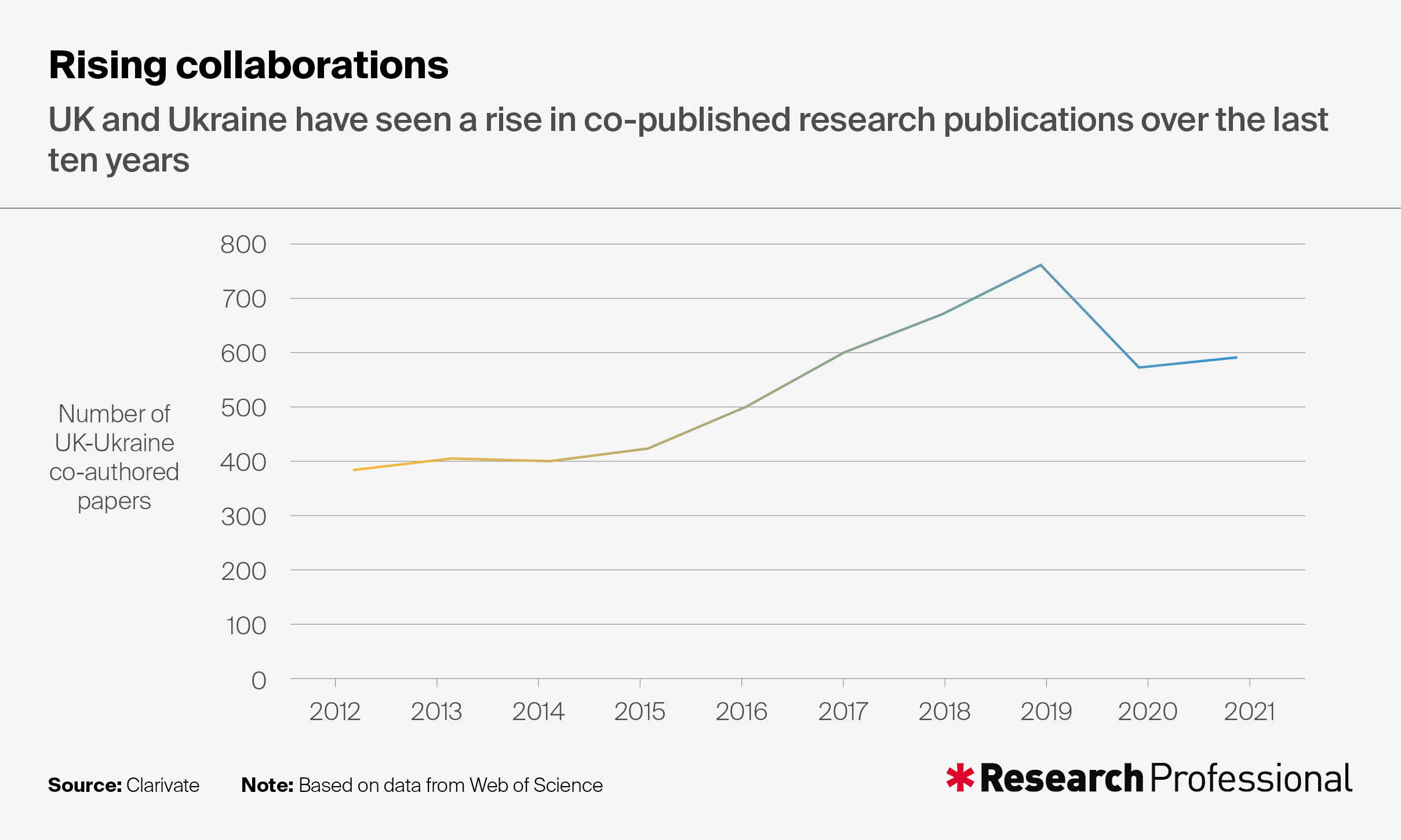 Imperial College was the most frequent UK co-authoring institution, followed by the University of Bristol.

The other UK collaborators in the top five are UK Research and Innovation, Science Technology Facilities Council, and STFC’s Rutherford Appleton Laboratory.

Universities of Oxford, Birmingham, Southampton, Warwick and Brunel University make up the rest of the top 10 collaborators, followed by Manchester, Edinburgh, Cambridge and Glasgow, all with several hundred co-authored papers over the past 10 years. 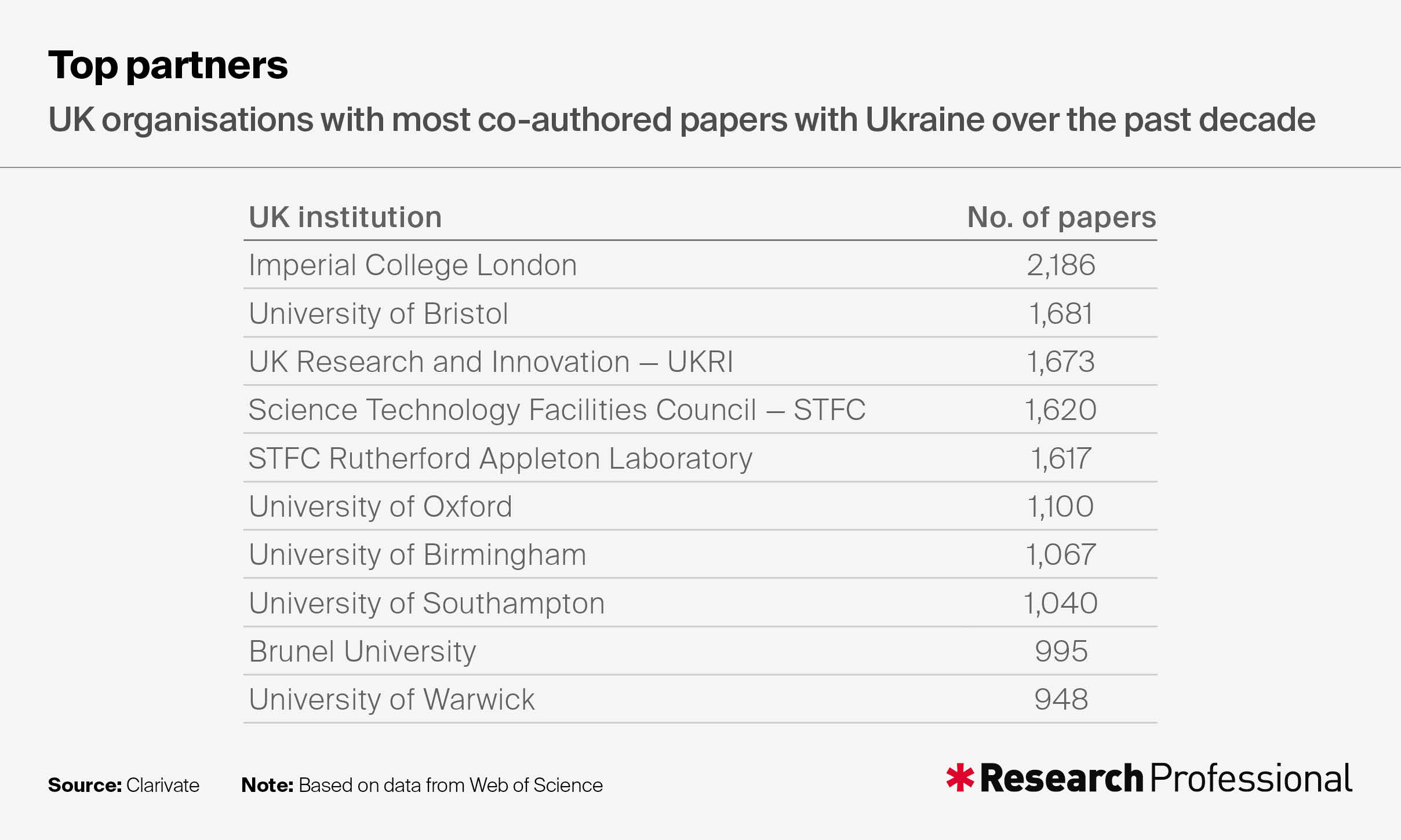 Imperial College London’s president Alice Gast and provost Ian Walmsley said in a joint statement that “UK, Russian and Ukrainian scientists have worked closely for decades in areas such as healthcare, high-energy physics and space exploration. There is a long history of scientists working across borders during times of conflict, improving the world through their discoveries and playing an important role in rebuilding relationships that have been divided.

“These individual relationships must continue; however, we will not partner with the Russian state.”

Other institutions in the UK are also carefully examining their links with Russia in the wake of the invasion. Stuart Croft, vice-chancellor of the University of Warwick, said on 28 February that his university had “agreed to review all our relations with Russian state institutions, with a view to terminating relations and contracts where possible”.

The UK government has also announced that it is reviewing its science and innovation ties with Russia, as part of a wider package of sanctions.

Meanwhile Ukraine’s links to Belarus—which has sided with Russia over the attack on Ukraine—are relatively small. Belarus is Ukraine’s 31st most frequent partner, behind Ireland and Mexico, and often linked to Russia: about two-thirds of Ukraine-Belarus papers have a Russian researcher as a co-author.

Belarus itself is “a minor player whose output has grown very little and has in fact fallen from about one quarter to one sixth to that of Ukraine”, says Adams.

The steepest rise in collaboration with Ukraine is for China, which is up from very little in the 1990s to 578 papers in 2021, making 4.86 per cent of Ukraine’s total, he adds.

As for Russia, its international research collaboration has been “relatively stagnant” in recent years. The UK is its 5th most frequent bilateral partner, going from a handful of jointly authored papers in the 1990s to just over 400 in 2017, 2018 and 2019.

“France is ahead of the UK in Russian collaborations but is about to be overtaken by China which is, as ever, on a steep trajectory,” says Adams.

The US and Germany remain Russia’s most frequent partners, although they each account for only around 3 per cent of Russian papers.

“Russia’s indexed research output has not grown as rapidly as that of other major research economies in the past 25 years,” says Adams, “but this may partly be due to the Russian Academy’s insistence on publication in Russian journals that are difficult to access for non-Russian speakers. However, there has been a decline in resourcing and status for scientists in Russia over the period.”