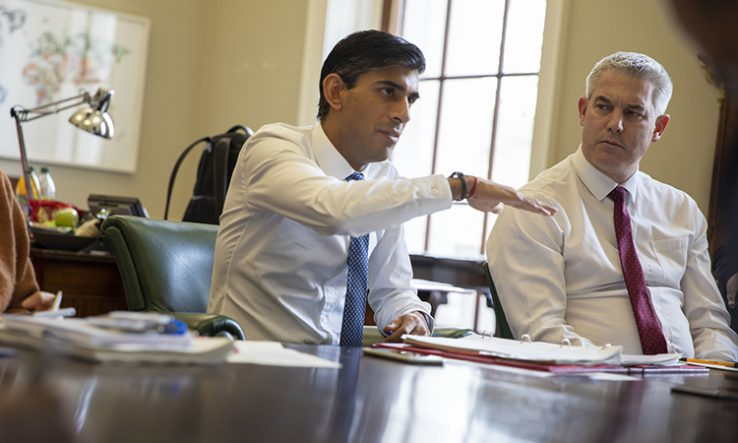 Research and ‘levelling up’ are the way out of looming economic crisis, says Rishi Sunak

The chancellor says he wants to go back to the government’s levelling-up agenda and boost support for research after the Covid-19 crisis.

Speaking at the government’s daily press conference on 14 April, Rishi Sunak refused to “write future budgets” but hinted at what they might contain.

“We remain very committed to the agenda that we set out before, which was about levelling up and spreading opportunity around this country,” he said. That agenda, including improvements in productivity and investing in infrastructure around the country “will only become more important as we exit from this crisis”.

Crucial in this, added Sunak, is looking at whether “this [is] the best place to go and study and research the next generation of…vaccines or indeed anything else that our country is so good at doing to create the next companies of the future”.

His comments came as the government’s independent economics forecaster, the Office for Budget Responsibility, warned that the UK economy could shrink by 35 per cent this spring as a result of the economic fallout from Covid-19 and the resulting lockdown.

Speaking before the chancellor’s comments, Graeme Reid, chair of science and research policy at University College London, said it should not be surprising if boosting R&D is high up in any post-Covid-19 budget.

“After the banking crisis hit in 2008, the government protected research and innovation—while cutting many other areas of public spending—because it recognised that the UK had become a knowledge economy,” he said. “Now the levelling-up agenda depends on a combination of infrastructure investments that include the UK’s knowledge infrastructure.”

Diana Beech, a former adviser to three universities and science ministers, said: “It is noteworthy that we now have a government that is intent on being led by the science. Experts are not just back in fashion but at the front and centre of informing the direction of government policy.

“For this public trust in experts to last, the science we need to be investing in now is a science which we know will deliver the tangible outcomes our society needs—in this case, vaccinations to fight the coronavirus and economic and social measures to minimise risk to people, supply chains, businesses and jobs.”