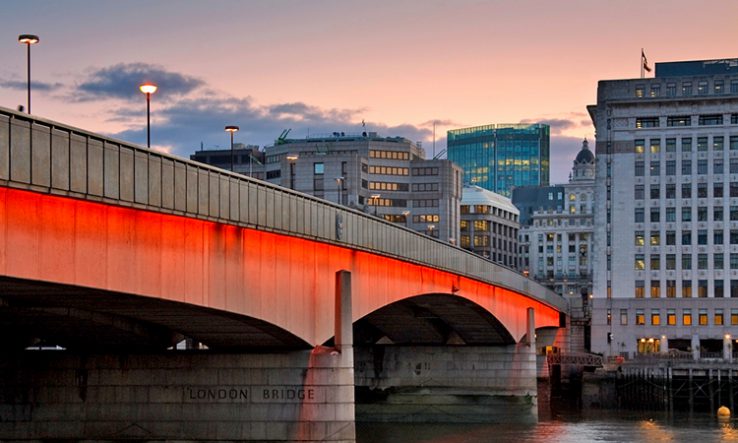 For the second time in as many weeks, universities find themselves at the front of the national conversation for tragic reasons. On 15 November, a fire in a Bolton student housing block merited a prime-ministerial visit to the town. This weekend, election campaigning in London was suspended following a terrorist incident at a conference organised by the University of Cambridge.

Three people, including the attacker, were killed at or following an event on prison education hosted by Cambridge’s institute of criminology on 29 November at Fishmongers’ Hall, near London Bridge. The victims have been named as Jack Merritt, 25, and Saskia Jones, 23. Three others, including a university staff member, were hospitalised as a result of the attack.

Merritt was a course coordinator for Learning Together, a programme run by the criminology institute to bring together students from outside and inside prisons.

It is the sort of social intervention that universities do very well but that often does not attract the attention it deserves, even within higher education.

As part of the programme, Cambridge students and inmates “read journal articles, listened to lectures, participated in small group discussions and wrote an essay that integrates new theoretical knowledge with personal experiences on the course. All students in our first cohort completed the course and graduated together at HMP Grendon in May 2015.” The British Academy awarded a postdoctoral fellowship for a longitudinal assessment of the programme.

The alumni event in Fishmongers’ Hall was intended to celebrate five years of the prisoner rehabilitation programme. The attacker, named by police as 28-year-old Usman Khan, was out of prison on licence after being convicted in 2012 of terrorism offences.

He was shot dead by police after being restrained by members of the public, including a prisoner who was an attendee at the event. Khan is understood to have been wearing a fake suicide vest. The BBC reports that he took part in the Learning Together programme while at HMP Whitemoor in Cambridgeshire.

The article says that Khan “appeared as a ‘case study’ in a report by the initiative. Identified only as ‘Usman’, Khan was said to have given a speech at a fundraising dinner after being released from prison.”

The BBC also reports that Khan—originally from Stoke-on-Trent—was “given a ‘secure’ laptop that complied with his licence conditions, to allow him to continue the writing and studying he began while in jail. Khan contributed a poem to a separate brochure, in which he expressed gratitude for the laptop, adding: ‘I cannot send enough thanks to the entire Learning Together team and all those who continue to support this wonderful community.’”

Jack Merritt was a graduate of the Universities of Manchester and Cambridge. Saskia Jones graduated from Cambridge in 2018.

In a statement released on Friday and later updated, Stephen Toope, vice-chancellor of the University of Cambridge, said: “I am devastated to learn that today’s hateful attack on London Bridge may have been targeted at staff, students and alumni attending an event organised by the University of Cambridge’s institute of criminology. What should have been a joyous opportunity to celebrate the achievements of this unique and socially transformative programme…was instead disrupted by an unspeakable criminal act.”

Loraine Gelsthorpe, director of the Cambridge institute of criminology, paid tribute to the victims, saying that Saskia Jones’s “warm disposition and extraordinary intellectual creativity was combined with a strong belief that people who have committed criminal offences should have opportunities for rehabilitation”.

“Though she completed her MPhil in criminology in 2018, her determination to make an enduring and positive impact on society in everything she did led her to stay in contact with the Learning Together community. They valued her contributions enormously and were inspired by her determination to push towards the good.”

She said of Jack Merritt that everyone at the institute would miss his “quiet humour and rigorous intellect”, adding: “His determined belief in rehabilitation inspired him to join the institute as a staff member to work in the Learning Together research team after completing his MPhil in criminology in 2017.

“Jack’s passion for social and criminal justice was infectious. He was deeply creatively and courageously engaged with the world, advocating for a politics of love. He worked tirelessly in dark places to pull towards the light.”

As politicians argue over who or what is to blame for the attack, the incident raises profound questions for higher education, which has lost two bright stars working in a crucially important area of social science research.

After further education, prison education is an impoverished distant cousin of higher education. Playbook has reported before that many inmates are prohibited from accessing student loans.

Prison education, along with much of adult education, has been in decline ever since the incentives of the student finance system shifted the priorities of universities towards three-year undergraduate degrees. All of the 2019 election manifestos have something to say about prisons and sentencing, but none of them find space to mention prison education.

The University and College Union represents prison educators as well as staff in further and higher education. As the UCU says, “prison education is the unsung part of post-school education. It plays a crucial role in work with offenders and the prevention of reoffending. Its lecturers often work in the most difficult of situations, often with less support or respect.”

The tragedy on London Bridge combines the double dilemma for higher education of the safety of staff in prisoner education with all that falls under the Prevent duty on the radicalisation of students—a scenario of some complexity at the intersection of class and race in modern Britain. It would be unwise to speculate at this point about Usman Khan’s early release from prison and its relation or otherwise to the Learning Together programme. Details will emerge during the police investigation.

While universities have been sheltered by the student loan system, prison education is one area of tertiary education profoundly affected by a decade of austerity. Despite that, the Augar report on post-18 education and funding makes no recommendations on prison education.

Education in prison is how the most disadvantaged access second opportunities, improve their life chances and learn about our common humanity through interlocution and sharing different points of view. If you believe in the transformative power of higher education, work in prisons ought to be near the top of your list of priorities.

The Learning Together programme is significant because it involves one of our major research-intensive universities taking the issues of prison education seriously, and it does so through mixed classrooms with inmates and Cambridge students—usually thought of as part of the privileged elite—as co-creators of knowledge. It is tragic that an event to celebrate the many successes of such a programme should end with the loss of three lives.

The young people who dedicated themselves to working with prisoners out of a belief in the transformative power of higher education, and who so sadly lost their lives, were the best of us.

Whatever the political fallout from the London Bridge attack in this election campaign, universities could honour the memory of Jack Merritt and Saskia Jones by looking again at their policies on prison education.

David Merritt, father of Jack, said that his son was “a beautiful spirit who always took the side of the underdog” and who “would not wish his death to be used as the pretext for more draconian sentences or for detaining people unnecessarily”. In memory of the victims of this terrible incident, universities might choose to redistribute some of their considerable resources to the cause of prison education. The London Bridge attack ought to teach us that we need more, not fewer, initiatives along the lines of Learning Together.

Martin McQuillan is editor of HE content at Research Professional News. This article originally appeared in our daily 8am Playbook email.