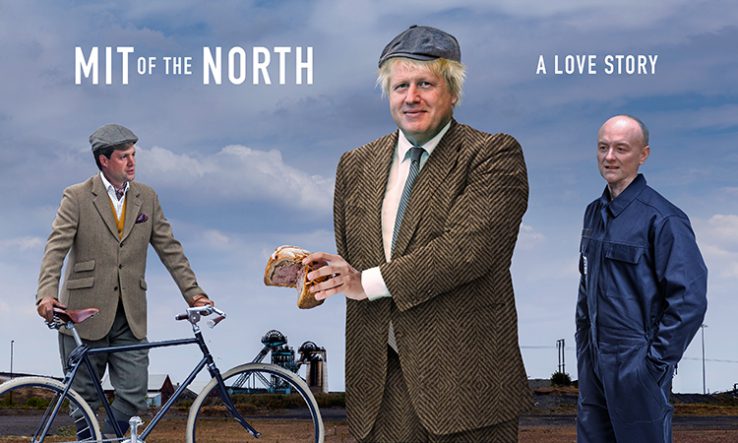 Ivory Tower: Another instalment of our romantic comedy set in Whitehall and Northern Powerhouse

Scene 1: Morecambe Bay, our heroine Selma Jones—assistant policy officer in the Cabinet Office—is jogging along the sands, listening to the radio over earphones.

Radio presenter: Coming up on the Today Programme, which Labour leadership contender has read the most Marx? After that, former Brexit secretary David Davis will be joining us to give us his views on Megxit and why she needs the UK more than we need her. But first, Whitehall is awash with rumours that the government is set to invest £100 billion in an MIT of the north, and that a team of crack civil servants are already scouting locations with the seaside town of Morecambe believed to be the preferred option. On the line is our north of England correspondent Basil Golightly. Basil, first of all, what is an MIT?

Jones: Team? Fat chance. Write your report Jones, send it to Cummings, get back on the train to London.

She sees a figure walking towards her with a large bucket and spade, accompanied by a white Jack Russell

Jones: I don’t believe it. Don’t you have a home to go to? What are you doing out here at this time?

Jones: Before driving your taxi or being a train guard? I suppose you sell them to the grey-haired local fishmonger.

Bucket man: Last fishmonger closed years ago. These are just for me and Maxi.

Jones: Since you are the only person I keep meeting here, you’d better tell me your name.

John: You are the only one staying at the Midland Hotel whose account is paid for by 10 Downing Street. They say you are here to buy up Morecambe and turn it into a science lab.

John: No, they’re loving it. They can’t wait to be offered a fat government cheque to off-load their worthless property. The mayor owns half of West End Park Street—he’s chuffed to bits.

Jones: You don’t sound too happy.

Jones: The government is trying to level up regional inequality, make the north a bit more like London.

John: If I wanted to go to London, I’d get on the National Express.

John: Take your earphones out and look around you.

Jones: I don’t have time for bantz, got to get another 5K done. I’m going this way. Bye.

John: I wouldn’t go that way, that’s quicksand and the tide is turning… Oh man…

Scene 2: A room in the Treasury, Whitehall

Permanent secretary: Chancellor, have you been listening to the Today Programme?

PS: And what are we going to do about it?

Chancellor: Nothing, if David Davis keeps getting invited on, there’s not much the Treasury can do.

PS: No, I mean this MIT of the north nonsense. Did you know about it?

Chancellor: Of course not, do you think Dominic Cummings and Boris Johnson consult the chancellor of exchequer before making spending pledges?

PS: It’s going to cost as much as HS2 and we’ve already agreed to pull the plug on that.

Chancellor: Have we? I thought we were having a cross-department review?

Chancellor: But why can’t we have an MIT of the north, if that is what Boris wants?

PS: Because there is no money. You spent it all before the election, remember?

Chancellor: Really? All of it? What did I spend it on?

PS: About a morning’s worth of headlines—50,000 new nurses, ring any bells?

Chancellor: Well, what are we going to do? I could be out of here in a month’s time and you could have Dominic Raab or Michael Gove at the Treasury and you don’t want that.

PS: I suggest we send a team of Treasury officials up there to cost it properly. Show that the project is in need of further development, independent analysis, peer review, international benchmarking, value-for-money tests, select committee scrutiny.

Chancellor: Send a team to keep tabs on their team? I like it.

PS: Four or five ought to do it. I think we have an account with a hotel there, the Midland.

Scene 3: A room at the Department for Business, Energy and Industrial Strategy.

Secretary of state: Why didn’t we know about this?

Sos: £100bn on a northern research and innovation university—where even is Morecambe?

Spad: I had to look it up on a map. It’s near where we granted those fracking licences.

Sos: It gets worse, now he’s interfering in energy policy too. What are we going to do about it? Apparently, he’s already sent a train-load of civil servants up there.

Spad: We could play the energy security card, say that the fracking zone should be isolated until all tests had been completed in say, five to ten-years’ time.

Sos: Brilliant, Cummings and Boris won’t want to wait that long. They are thinking of the next election.

Spad: Shall I brief some friendly journalists?

Sos: First, get yourself up there and issue a C21 notice, banning any further development in the area.

Spad: I can’t do that. You need a whole crew of civil servants to carry out an analysis and to draw up recommendations.

Sos: Well what’s keeping you? Take eight of them with you.

Spad: But where will we stay?

Sos: Says here on the procurement list that the government has an account at a place called the Midland Hotel. Had it since 1940. Off you go, chop-chop.

John: You’ve had a traumatic experience. I think you should take it easy.

Jones: It was very kind of you to pull me out of the mud, but I’m fine.

John: Quicksand, and technically it was Maxi who stopped you from drowning.

Jones: Stop fussing, haven’t you got a train to guard? I’m all washed and clean and need to go to work now.

John: You are in shock.

Jones [speaking to the receptionist]: Good day, I have a 10.30 appointment in the Mayor’s Office.

Receptionist: Yes, Ms Jones, down the corridor, first on the left.

Jones: How did you know I was…? Never mind. First on the left, thanks.

Councillor Clitheroe: Is it true?

Mayor: Mrs Clitheroe, we agreed to be subtle.

Clitheroe: I am being subtle. I’m asking if it’s true.

Jones: Is what true?

Councillor Taylor: That Boris Johnson has sent you here to buy up Morecambe?

Mayor: Of course you are. Would you like some tea or coffee?

Councillor Braithwaite: So, it is true.

Jones: Coffee would be lovely, no milk.

Clitheroe: We’ve drawn up a plan for you.

Mayor: Mrs Clitheroe, we agreed to play it cool.

Jones: I’m sure there will be a chance to submit any local views.

Braithwaite: Show her the plan Henry.

Mayor: Very well. Ms Jones, I’m sure you’ll agree that you can’t put a price on community and even though £100bn sounds like a lot of money…

Councillor Taylor: It is a lot of money.

Mayor: To help speed up the planning and consent process we’ve drawn up proposals for a one-off £200,000 to £2million payment to every adult resident of the town in lieu of property rights, depending on the size of their portfolio, and a trust fund for the people of Morecambe to receive 10 per cent of all profits from the innovation park in perpetuity, as well as any subsequent exploitation of the natural resources of the Morecambe area.

Jones: I’m not sure about…

Taylor: You can’t expect people to give up their birth right for free.

Braithwaite: You can’t put a price on community.

Jones: I think you misunderstand what the government wants to do.

Mayor: It wants to get re-elected. That comes with a price.

Jones: But if everyone leaves the town, how will you benefit from locating a new facility here?

Braithwaite: New facility? I knew it, one of those MIT things. I knew it.

Jones: I was being hypothetical.

Clitheroe: You haven’t asked her yet.

Mayor: I’m getting to that Mrs Clitheroe.

Mayor: Very well, Ms Jones, will the Morecambe Institute of Technology be naming any buildings or granting honorary degrees? As a selfless public servant, I’m not one to put myself forward, but perhaps there should be some recognition of the group effort of the council members as founding fathers of the new facility, as it were.

Taylor: How is the Midland Hotel? I’ve never stayed there but I believe they do a good cream tea.

Boris Johnson: What a dog’s dinner, why wasn’t I briefed?

Dominic Cummings: What is it now Boris? I’m busy designing uniforms for the security guards at the Advanced Research Projects Agency.

Boris: I’ve just done PMQs and they asked me some bally difficult question.

Boris: No some flat capper, northern MP, about what process has been gone through to identify alternative sites for the MIT of the north? And how their constituency would launch a legal challenge against any Whitehall stitch up.

Boris: It was one of ours, a Tory backbencher from Cleckhuddersfax or somewhere. I didn’t like it Dom. I didn’t become PM to be asked difficult questions.

Dom: You are pathetic Boris, man up.

Boris: They are saying in the press office that Good Morning Britain are sending Piers Morgan and Susanna Reid up to Morecambe for a special edition tomorrow, and Newsnight are sending Emily Maitlis. I don’t want them asking about legal challenges, Dom.

Dom: If you want something doing, do it yourself. I’ll go to Morecambe to sort this out. I’ll take your car. Find me a hotel to stay in, something on the sea front.

Scene 7: Evening, the promenade Morecambe seafront. Selma Jones is looking out across the water.

Jones: Just write the report and go home. You’ve got a zumba class on Thursday.

John: Talking to yourself is the first sign of madness.

Jones: Where did you come from? That’s a bit stalkerish.

John: Just walking Maxi. Is that the only coat you’ve got? It’s too cold to be out in Morecambe in January in a cagoule.

Jones: Thanks grandad. It’s high-performance sports blouson, and it’s absolutely freezing. But the Midland Hotel is heaving tonight for some reason. A load of people in suits just arrived, and camera crews. Is something happening here tomorrow?

John: Maybe they’re looking for the mythical MIT of the north.

Jones: Like the mayor and his fellow honorary doctorates. Don’t you have a third job to go to? Shouldn’t you be picking up pensioners in a mini-bus, or something?

John: Actually, I was just going to get a bite to eat at my brother’s caf‘ at the end of the bay. Want to come? I promise not to make jokes about your cagoule.

John: Here, take my parka and come for a bowl of cockles chowder.

Terms of use: This is a free email for fun on a Friday, it should circulate widely like promises of nationalisation during a Labour Party leadership contest. Want a voucher for 25 per cent off a cream tea at the Midland Hotel, Morecambe? Want to say hello? Email ivorytower@researchresearch.com