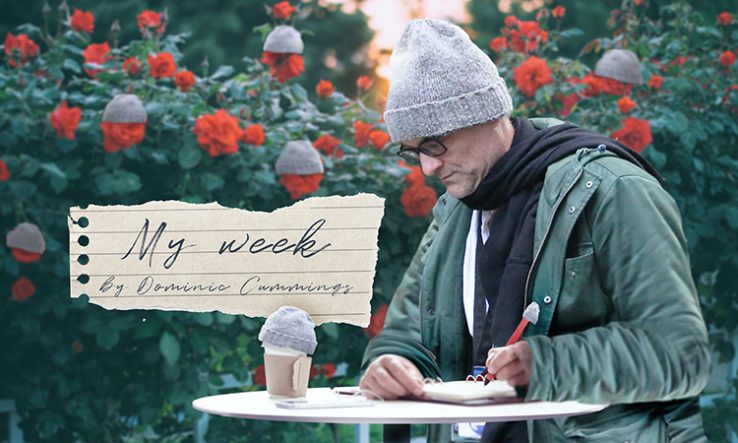 Ivory Tower: exclusive access to the diaries of the soon-to-be-ex special adviser

Let me see…cavalry officer, no; bee-keeper, no; LA gang member, nope; frogman, no…oh I can’t decide and I’m going to be late, so I stop looking through my wardrobe and put on my usual gilet with a 1970s orange Umbro hoodie. Will I wear the Fez today? Maybe not. Pith helmet? Too near Armistice Day. This purple beanie will do.

Now, I’m ready for a Zoom call with No. 10 director of communications Lee Cain.

“Lee, you’re on mute,” I tell him, so much for communications wizard.
“I was saying, do you think the Biden win will have any significance for us?” he asks.
“What win? Trump won by a lot,” I tell him.
“Listen Dom, I’ve got a bad feeling about this,” he says.
“Chicken,” I say.
“Don’t bring all that up again. It was a long time ago,” he says.
“No, I mean now. Screw your courage to the sticking place and by the end of the week, you will be Downing Street chief of staff and I will be the grand high sultan and extreme potentate of Great Britain and Northern Ireland,” I say.
“Is that another one of your outfits?” he asks.
“Listen, we’ve got to stop Sunak pulling the plug on Arpa,” I say.
“I didn’t get through it myself,” he replies.
“What?” I say.
“The Russell Brand remake of Arthur, it’s pretty terrible,” he says.
“I’m talking about my Advanced Research Projects Agency,” I tell him.
“Oh that, I’m more worried about Boris signing a deal with the EU,” he says.
“What makes you think that is going to happen?” I ask.

Then Lee freezes. His WiFi has gone again. I hate Zoom, so less easy to stare people out than when they are in front of you. He’s probably still blabbing away on the other end oblivious. He’ll need to come out and reboot the programme. Then all of sudden, he’s back.

“So, what do you think I should do?” he asks.
“Just quit, it’s the only thing that works,” I tell him.
“Wow, thanks for the advice Dom, I’ll remember that,” he says and leaves the call.

I wait for an age, but he doesn’t dial back.

Time for my weekly meeting with Amanda Solloway, who still thinks she is the science minister, poor woman.

“I think it should be a lab coat,” she says.
“There is nothing wrong with wearing the same gilet two days in a row,” I tell her.
“No, I think the director of Arpa should be a scientist, someone who actually knows what they are talking about,” she says.
“Really?” I reply.
“I didn’t mean to imply anything by that Dom. I just meant…” she trails off.
“You’ve said enough,” I reply and look out of the window.

You can hear the clock tick, as a bead of sweat trickles down her face.

Finally, I say, “what makes you think you have a say in this?”
“I am the science minister,” she says.
“Not this again,” I reply.
“I am and I will not be intimidated by you,” she replies, looking at her feet.
“How are things over with the bees?” I ask, trying to be conciliatory.
“BEIS?” she asks.
“No, the drones, how is the hive doing over in the business department?” I ask, leaning back in my chair and putting the tips of my fingers together under my chin.
“We are working on a new project,” she says, nervously.
“Tell me more, has it been approved?” I ask.
“It was in the roadmap,” she says.
“We agreed never to speak of that again,” I shout. Then I pause, and say, “Oh sorry you said roadmap, not road trip. Do go on Amanda, what is your project about?”
“Bullying,” she says, beginning to shake.
“Good idea,” I say, “who needs bullied?”
“No, it’s about the toxic culture in research and staff who feel bullied,” she says, looking at the door.
“Bit woke, isn’t?” I say, swivelling in my chair.
“Britain stands up to bullies,” she replies.
“Does it?” I ask puzzled, “didn’t we give a state visit to Vladimir Putin, Xi Jinping and Donald Trump? I think you’ll find Britain rolls out the red carpet for bullies.”
“You’ll see,” she mutters.
“You’ve entertained me long enough Amanda, you may go back to the drones,” I tell her.
“I’m just going upstairs to see Carrie and the baby,” she says.
“You’re not Jacinda Ardern,” I tell her.
“She won’t get a state visit,” she replies.
“See, we can agree on something,” I say.

“You’ve done what?” I scream.
“I’ve quit,” says Lee Cain, taking another slug of Brew Dog Barnard Castle. I think he’s taking the mickey.
“In God’s name why?” I carry on screaming.
“Because Boris offered me the job of chief of staff,” he says, throwing back the entire can.
“He offered to make you chief of staff, so you quit as director of communications? I don’t get it,” I say, waving my arms and stomping around.
“I don’t want to be marginalised,” he says.
“Being marginalised by being made chief of staff? What are you talking about?” I rant.
“But you said…” he stammers.
“I said you should become chief of staff,” I tell him.
“But…” he says, confused.
My phone pings with a text message.
“It’s that bloody woman,” I say.
“Carrie Symonds?” he says.
“No, the other one,” I say.
“Allegra Stratton?” he replies.
“No, the other one,” I say.
“Amanda Solloway?” he says, hopefully.
“Who?” I reply, “No, not her, what’s her name?”
“I give up Dom, who?” he asks.
“Mary Wakefield,” I say, remembering.
“Your wife?” he asks, nonplussed.
“Yes, it’s a text asking me to pick up some milk and a loaf from Waitrose on the way home,” I say.
“You got any more Barnard Castle?” he asks.

I glare at him and reach for the bag-for-life I use to keep government papers in.

“Give me some good news, Dom,” he wails.
“I’ve still got a job. Have you seen the labour market out there?” I reply.

Boris says he wants to see me at the end of the day. I go into his office and he is sitting behind his desk with Carrie standing next to him.

“What is this, the Pride of Britain awards?” I ask.
“Very good, Dom, very drole,” says Boris, looking shifty.
“Tell him, Boris,” Carrie says.
“Tell him what, Boris?” I say.
“Look Dom, it’s like this. The thing is, if I can speak freely, reductio ad absurdum, and get to the point, ergo propter hoc, as it were. Just to be perfectly clear…” he says.
“Stultus est sicut stultus facit," I tell him.
“Eh?” he asks.
“Have you not seen Forest Gump, prime minister?” I ask.
“We haven’t got time for that now, let me get straight to the point…” he trails off.
“Tell him, Boris,” says Carrie.
“I will, stop interfering,” he says.
“Me?” I say, surprised.
“No, it’s your job to interfere,” he says.
“Not anymore,” says Carrie.
“Look, I’m dealing with this,” says Boris.
“What? Brexit? Coronavirus? The economy? Levelling-up? China? Barnier? Biden? You aren’t dealing with any of it,” I tell him.
“That’s your job,” he says.
“So, you want me to stop interfering?” I say confused.
“No, I want you to keep on interfering,” he says, now confused himself.
“Tell him Boris,” says Carrie.
“Tell him what, Boris?” I say.
“Look Dom, it’s like this…” stutters Boris.
“You’re fired,” says Carrie.
“I wanted to say that,” says Boris.
“Fired?” I say, incredulously.
“Not fired exactly, it’s more that we are going to have to let you go, Dom,” says Boris, looking at his shoes.
“How can I carry on interfering if I’ve been fired?” I ask.
“Fired in a good way, Dom. It’s really more of a vote of gratitude and thanks…” says Boris, looking at Carrie.
“And may I ask, why I am being fired?” I say.
“Tell him, Boris,” says Carrie.
“We’ve had a complaint,” replies Boris.
“From who?” I ask.
“I’m not at liberty to say,” replies Boris with his head in hands, shaking, “it could be anyone. Literally, round here it could be anyone.” I think he’s crying.
“I thought you’d know, Dom,” says Carrie smiling.
“What?” I ask, nonplussed.
“It’s not “from who?” It’s “from whom?” she replies.

I never thought I’d be nostalgic for Mark bloody Sedwill.

I’m walking by the Embankment when I see a man, in black suit and bowler with a briefcase standing by a tree.

He says, “Hello, Dominic, it’s been a long time.”
“Who are you?” I ask.
“Don’t you remember me?” he says.
“Were you on the Vote Leave campaign?” I ask.
“Oh, I met you long before that,” he replies.
“Do you know Gove?” I ask.
“In a sense,” he smirks.
I look over my shoulder and all along the Embankment in both directions, then whisper, “it wasn’t Russia was it? Because that was all a long time ago and I really can’t remember much of the details.”
“No, Dom, it was before Russia, don’t you remember?” he smiles.
“No, who are you?” I say.
“I’ve got something for you,” he says, opening his brief case and handing me a piece of paper. I read it.
“What is this?” I ask, incredulously.
“Don’t you remember? That late night in the Premier Inn at Durham Services. You were staying there after your night club had been closed down,” he asks.
“No, not you, it can’t be,” I reply.
“A deal is a deal, Dominic,” he says.
“Why now? Please, it’s too soon…” I tell him.
“It is dated at the bottom, Friday 13 November 2020,” he says.
“You’re the devil,” I say.
“Quite right, Dominic. All those years ago you sold your soul to me, in return for taking Britain out of the EU. Good deal that, got Farage with that one as well, two for the price of one,” he gloats.
“And being the most powerful man in the country, that was part of the deal,” I say.
“You’ve had that, couldn’t do much for Farage on that one,” he replies.
“Look, I’ll give you all I’ve got, anything, just don’t take me away. Surely, we can do I deal?” I plead.
“A sort of doubling down?” asks the devil.
“Yes, anything, please,” I beg.
“What have you got, that I could possibly want?” he says.
“How would you like to be the first chief executive of the Advanced Research Projects Agency?” I ask.
“Don’t you have to be a scientist for that?” he says.
“Don’t you start as well,” I reply.
“Intriguing, tell me more…” he says, and we wander off down the Embankment.

Terms of use: this is a free email for fun on a Friday afternoon. It should be shared widely like insider information from the vaccines taskforce. Want to apply for the job of No 10 director of communications? Want to say hello? Email ivorytower@researchresearch.com