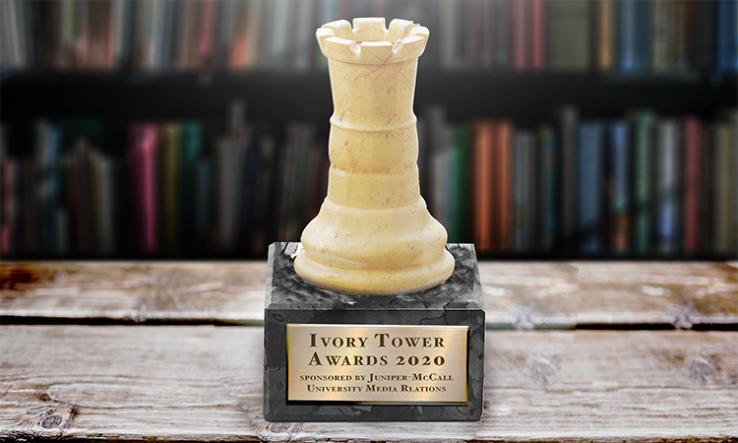 Ivory Tower: our annual prize for the worst contributions to higher education and research

It was virtually a star-studded evening as dozens of readers joined us for the Ivory Tower Awards 2020, sponsored by Juniper-McCall University Media Relations. Senior partner, Alexander Juniper was resplendent in a crushed-velvet smoking jacket and paisley pattern cravat, alongside fellow executive Oliver McCall, who chose a ruff shirt and polyester bow tie combo, which some said made him look like a 1970s snooker player.

Joining them ‘on stage’ was Janet Bickerstaff, the esteemed degree apprentice and widely recognised brains behind the operation. Janet wore a tartan, crimplene trouser suit, explaining that Primark had not been open for the past three weeks and who cared it was only an online thing anyway.

As ever, the Ivories recognise the very best of the worst of higher education and research. Staff from Research Professional News were on hand to dish out the awards. Apart from the 45-minute break when the WiFi went down and the Zoom bomber who shared a picture of a body part which we can only assume was not anatomically drawn to scale, the evening was judged a great success, by some.

Alexander Juniper said, “after a year like we’ve had, it has been a delight to get this over and done with”. Oliver McCall said, “it’s all about our commitment to education, and that certainly taught me a lesson”. Janet just rolled her eyes and sighed, a lot.

Omnishambles of the Year

This was perhaps the most keenly contested category of the night. It has been a year like no other for quarter-witted policymaking and disaster management on an epic scale. There was the bailout for universities during the pandemic, which spawned both soon-abandoned student number controls and the Orwellian-sounding Higher Education Restructuring Regime. Then there was the migration of students to university campuses in September which seeded Covid infections across the country.

Special mention goes to the University and College Union’s annual congress, which had to be abandoned after technical difficulties, possibly because no one had a pro Zoom account.

There is however, a common thread running through a year of dead-ends and train wrecks: one man’s commitment to ministerial irresponsibility and indecision making. So, in recognition of an astonishing year, and in particular his contribution to ensuring that August was truly the silly season for journalists with what is now universally known as “the A-level fiasco”, the award goes to: Gavin Williamson, secretary of state for education.

There was Manchester Metropolitan University’s Birley halls of residence debacle, in which 1,500 students were locked down at a few hours’ notice. Not to be outdone there was the jaw-dropping decision of their city rivals’ at the University of Manchester to erect security fencing around a halls of residence, which led to students tearing down the fence, occupying a building, the vice-chancellor’s car crash interview on Newsnight, a student occupation, a rent strike, and finally a compensation package for those living in halls. It’s remarkable, when you note that in Manchester the pubs were closed for most of the time throughout all this.

However, one person’s contribution to student wellbeing stands out. It includes the advice to students that if you are unhappy with the online learning you receive then go to the ombudsbody or the courts; the insight that it is not important to look at the groups of people who are not going to university; and the claim that the government had not told students to travel home in March, when they clearly had; and her mistaken belief that POLAR data measures household income. This year’s student experience award goes to universities minister, Michelle Donelan. We hope in 2021 she finally gets to meet some students.

Crony of the Year

In a bumper year for cronyism in the supply of Personal Protective Equipment to the government, higher education managed to find new ways to contribute to the chumocracy. Health innovation minister James ‘Lord’ Bethell made headline news when he invited the chairman of lobbying-firm Portland Communications, George Pascoe-Watson, to sit in on meetings with health secretary Matt Hancock and NHS Test and Trace chair Dido Harding.

Who can forget when the commissioner for public appointments explicitly criticised the government for “packing” the interview panel to recruit Michael Barber’s replacement as chair of the Office for Students with allies of the Conservative Party? However, the winner of this particular Ivory is a deserved and outstanding candidate, whose own time in government appeared to demonstrate a profound and wide antipathy towards higher education, before being ‘let go’ after near election disaster, only to be brought back as a non-executive director at the Department for Education, advising on classic policies such as free speech on campus and low-value courses.

The crony of the year award goes to: Nick Timothy.

U-turn of the Year

This field attracted a record number of entries. The judges whittled down a very long list using the criteria of speed (how quickly had the U-turn been forced) foreseeability (how obvious it was to everyone else that a U-turn was coming) and comic value (how hard the judges had laughed when the U-turn took place).

Again, one man has turned more often than Torvill and Dean. He dominated the category, and on the basis of the data supplied we are working up an algorithm for government U-turns. But the judges felt that one example stood out, his six second U-turn during an interview with LBC’s Nick Ferrari. Category winner, Gavin Williamson (who was quickly becoming a one-man Titanic, the film that won 11 Oscars not the maritime disaster) by defending Michael Gove’s scrapping of AS Level exams only to do a volte-face seconds later when he admitted that he wished that, like Wales, England still had the exams.

There were many deserving nominees in this category, including the prime minister’s claim that he had visited a Coronavirus ward and shook hands with everyone, shortly before he contracted Covid-19 himself. There was the chief medical officer for Scotland, Catherine Calderwood’s trip to the Fife coast during lockdown.

Also, in a strong showing from Scotland there was SNP Westminster MP Margaret Ferrier who travelled by train to London with Covid symptoms and then back again after receiving a positive test result. Special mention should also be made for Edward Bottomley, Carly Munnelly and Luke Tryl from the Public First consultancy who wrote a report for the Wellcome Trust and the Campaign for Science and Engineering calling for R&D plotlines in popular TV shows, like Eastenders.

However, the judges felt it only right to recognise the achievements of one man, to unite the country in their antipathy towards him and to provide some of the best comedy material of the year. So, in honour of his eye-testing drive to Barnard Castle the follow the science award goes to the dearly departed Dominic Cummings.

The #MeNext Award for Equality

It has been a big year for rolling back advances in civil liberties, human rights and gender and race equality. We note the special efforts of the government to decouple Athena Swan recognition from science funding in the name of “cutting red tape” and the special work of the equalities minister, Kemi Badenoch’s full-throated denunciation of the academic discipline of critical race theory.

However, this year’s prize for outstanding commitment to inequality goes to the Institute of Physics for its record on diversity when they published a list of honorary fellows which included more white men named Brian than women and people of colour.

Funding Opperchancity of the Year

2020 saw another bumper crop of frankly bizarre funding opportunities for researchers. Whatever domestic alternatives the government comes up with for membership of European research schemes they are unlikely to beat this year’s shortlisted candidates.

There was the Ministry of Defence’s call for research into, ‘Advancing Less Lethal Weapons’, which presumably they’ll want to sell to our battlefield enemies.

Covid has caused immense suffering in our society, but surely nothing worse than the postponement of the Amateur Yacht Research Society’s John Hogg prize “for the understanding and development of sailing performance, safety and endurance…the prize is worth £1,000 and includes free membership for one year.”

But the worthy winner is the International Continence Society’s lifetime achievement award, which we imagine was won by someone who has dedicated their life to holding it in. Maybe it went to Dominic Cummings on that road trip to Durham.

Eyesore of the Year

Usually the preserve of the edifice complexes of vice-chancellors, the pandemic has taken its toll on building, so this ever-popular and much-coveted category had limited entries this year. However, while the University of Manchester won praise for its fence building, we did have a winner of most unwelcome erection of the year.

The prize goes to a well-intentioned but “container-like” student block opened up by the University of Edinburgh in the city’s Bristo Square to give students more space to mingle while socially distancing. It looked like an outsized exhibition stand left over from one of the cancelled party conferences. It was described as a “complete eyesore” and was said to have left students ‘confused and horrified’. “My eyes are bleeding,” said one dismayed student.

International incident of the Year

Although we have not been able to travel much this year, that has not stopped us laughing at our fellow citizens of anywhere. There were some truly distinguished nominees for global village idiot this year.

Who can forget Mauro Ferrari, when in the middle of a continent-wide lockdown, the entire board of the European Research Council passed a vote of no-confidence in its president after just three months in the job. As ever, the German political class provided some worthy candidates with minister for family affairs, Franziska Giffey dropping the prefix Dr, after the Free University Berlin began a second investigation of her doctoral thesis.

However, this year’s prize goes to the National Oceanic and Atmospheric Administration in the United States in recognition of the moment when president Donald Trump doubled down on claims that Hurricane Dorian would hit Alabama by displaying to TV cameras an official Noaa forecast map that had been apparently amended with a sharpie pen to prove his claim.

Rather, than disown Trump’s nonsense, the Noaa press office released a statement saying the hurricane “could” hit Alabama and that previous reports from the service “spoke in absolute terms that were inconsistent with probabilities from the best forecast products available at the time”. The subsequent investigation found that the Noaa leadership had been overruled by commerce secretary Wilbur Ross, who is exempt from scientific integrity rules, apparently.

And so, with the immortal words, “next slide please”, Alexander Juniper brought the 2020 Ivory Tower Awards to a welcome close.

Terms of use: this is a free email for fun on a Friday afternoon, it should be shared among households and accompanied by a substantial meal. Want to nominate a colleague for the continence lifetime achievement award? Want to say hello? Email ivorytower@researchresearch.com