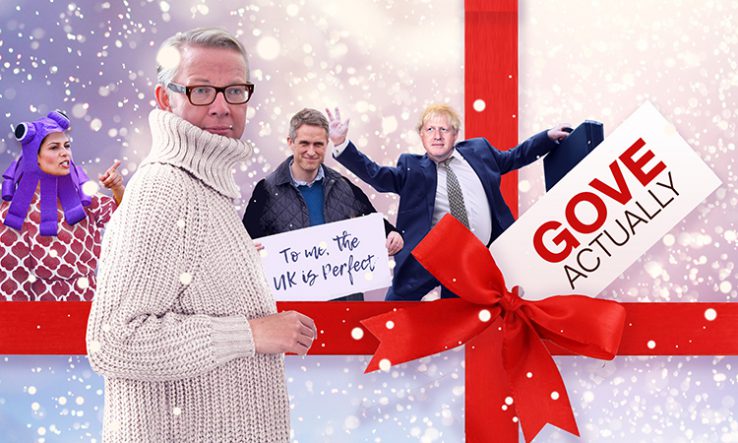 Scene 1. Downing Street, Boris Johnson is in his office, holding a photo of his lost love

Boris: Why did you have to leave? After everything we’ve been through, all the good times, all those late nights…stonking, that’s what it was, stonking…I’ll never find another like you. Why did you leave, Dom? All I have left is my tiers and an 80-seat majority to remember you by.

[Outside the door Allegra Stratton and Simon Case are talking]

Stratton: He’s been like this for days. He needs a distraction.

Case: He needs to pay attention to Brexit, if he leaves it any longer, we may have no-deal by accident.

Stratton: It’s no use, he just sits there singing the tune to the Pink Panther.

Case: He needs to meet with Ursula von der Leyen.

Stratton: We’ll never get him to go to Brussels, he hasn’t the attention span to sit through complicated negotiations.

Case: What if we told it him it wasn’t a meeting.

Stratton: We could tell him it was just dinner.

Case: Better, we could tell him it was a date.

Stratton: Just the two of them, in the president’s private rooms? Great idea.

Case: I’ll call Brussels, you get Boris shaved and in a suit.

Scene 2. Amanda Solloway and Michelle Donelan are watching TV together in their Westminster bubble flat. The doorbell rings.

Donelan: I’ll get it.

[She goes downstairs and opens the door. She is surprised to see Gavin Williamson holding cards and a CD Player]

Solloway: [shouting]: Who is it?

Solloway: Tell him to go away, Strictly is about to start.

Williamson starts the CD, it plays the theme to The Great Escape. He holds up a handwritten card, it reads:

“With any luck by next year”

Williamson moves through a series of cards:

“I’ll be working in one of these ministries”, followed by a card with picture of tanks, police officers, health care workers, and Treasury red box.

Donelan: I get it, next slide please.

Williamson moves on to the next cards:

Donelan: Ok, I get it. Do you have any slides that are not of European stereotypes?

[Williamson flicks through the remaining cards and shakes his head. He drops the cards to the ground, all but the last one which says: “I❤️GB”].

Donelan: Thanks, are we done now?

[Williamson nods, Donelan closes the door. Williamson walks off down the street].

Williamson: [to himself]: Enough, enough now. We’ve had enough of experts now, and foreigners.

Michael Gove is working late on his own. “Jump (For My Love)” by the Pointer Sisters comes on the radio. He starts to bop along, he stands up and begins to dance, carrying on out into an empty 10 Downing Street. He mouths the word “Gove” when the song lyrics say “Love”.

Gove: Ah, hello. I was just wondering if we could move the secret meeting to vet Freedom of Information requests to 4pm tomorrow.

PPS: You know that the prime minister has gone to Brussels, sir?

Gove: Can’t he take the Eurostar like everyone else?

PPS: I think he is there to agree a trade deal with the EU.

Gove: No! Have my car brought round the front, I need to get there before it’s too late.

UvdL: And Boris means “wolf”, does it not?

UvdL: I think you are leaving, no?

UvdL: No, I mean your Brexit. That is the point, you are leaving.

Boris: Listen, Ursula can we take these masks off? I’m feeling quite constrained.

UvdL: No, you must keep it on at all times. Except when eating, and then afterwards you put it back on straight away.

Boris: Well, I’ll go with it if masks are your thing.

UvdL: Very much so, everyone must wear them.

Boris: Are others coming? I thought it was just the two of us.

UvdL: The night is young, who knows where it will take us. There are always people on hand here who are ready to join in.

Boris: Oh boy, Allegra wasn’t wrong. I could finally get to like Brussels.

[Michael Gove sets off in his ministerial car from Downing Street. He is heading to St Pancras for the Eurostar. “Love is All Around” plays on the radio. He mouths “Gove” to every mention of “love”. We see him board the train, sitting in a carriage, buying coffee from the buffet].

Scene 6. The UvdL and Boris dinner, they are on the main course.

Boris: Tell me Ursula, when did you first decide you needed me.

UvdL: I always knew it would come to this.

Boris: I have to say, it’s a surprise to me. I had no idea you were interested.

UvdL: Yes, I have a full agenda as president but sooner or later you and I were going to have to be alone together.

Boris: Woof, to think all those years I wasted writing about straight bananas.

UvdL: I want to pin you down Mr Johnson.

Boris: Goodness, shall we wait until we’ve had desert first?

UvdL: As you wish, I cannot pretend to understand all your English ways.

Scene 7. Brussels Midi Station, Gove gets in a taxi

Taxi driver: We speak French here actually, but for you Englander I will speak English.

Taxi driver: Whatevers, mate. You want me to speak British then?

Gove: Anything but French.

Taxi driver: Ah, I know you. I see you on television. You are English Dick.

Gove: I beg your pardon?

Taxi driver: You are English Dick Cheney. You gather all power to yourself under an incompetent boss. He is England Trump, you are England Dick Cheney. I watch the news.

Gove: I used to have such fun in the department for education, with Dom. I miss Dom.

Taxi driver: What did you ever achieve in education?

Gove: I did away with teacher assessment and based everything on one final exam.

Taxi driver: That’s not looking so clever now. You want me to put the radio on?

[“Love Will Tear Us Apart” plays on the radio as the car heads through the streets of Brussels].

Scene 8. The UvdL and Boris dinner, Stratton and Case are speaking outside the door.

Case: When are you going to tell him, he’s not on a date?

Stratton: That should be obvious by now even to someone as thick-skinned as Boris.

Case: Are you sure?

[Inside the room, they have moved onto coffee]

UvdL: Enough of the formalities, let us get down to business.

Boris: Gosh, you Germans are so forthright.

UvdL: There is something I have to say to you.

Boris: Go on, tell Boris everything.

UvdL: We are alone together, so I can say this now.

Boris: I’m all yours.

UvdL: There is no way we can accept your proposals on the level playing field, governance and fishing rights.

Boris: I could come round to your side of the table.

UvdL: No, please stay there and put your mask back on if you have finished eating.

Boris: But Ursula, this is the damned oddest date I’ve ever been on.

Boris: Yes, Allegra told me you wanted to have dinner and spend some personal time together.

UvdL: To discuss the points of divergence in trade negotiations between the Commission and your country. Did you think you were on a date?

Boris: Err no, obviously not, no. Just a bit of a mix up on the communications front. New communications chief, still bedding in, that sort of thing.

Scene 9. Michael Gove pays the taxi driver and runs through the Berlaymont building, looking for the president’s office. “Crazy Little Thing Called Love” plays on the soundtrack. He heads towards the president’s rooms, he sees Stratton and Chase and barges past into the dinner scene. As the song repeats the title for a second time we hear, “Crazy Little Thing Called…”

UvdL: Is he here on your date too?

Gove: Date? Boris, how could you?

Boris: Just a bit of supper and some chat, that’s all.

Gove: How could you see her behind my back? Where you going to…?

Boris: No, Michael, I could never betray you.

Gove: Where you going to…you know…?

Gove: Do a deal. There, you’ve made me say it, now I feel cheap and dirty, just like your proposals for membership of Erasmus+ and Horizon Europe.

UvdL: They are not cheap, I can assure you.

Boris: Ursula, thank you for dinner. I think I should be getting back to London.

UvdL: [sighs] My door is always open for fresh proposals. You can come back when you know what you actually want.

Boris: I’ve made my choice. I want good old British sovereignty, and I want Gove actually.

[Johnson and Gove embrace, and walk off with their arms around one another]

UvdL: I’ll send you the bill for dinner, try paying for it in sovereignty.

Credits, reprise of “Love is All Around”.

Terms of use: this is a free email for fun on a Friday, it should be shared like national sovereignty to achieve geopolitical strategic aims and for the advancement of trade and knowledge. Wondering whether Liam Neeson is going to play Patrick Vallance again? Want to say hello? Email ivorytower@researchresearch.com