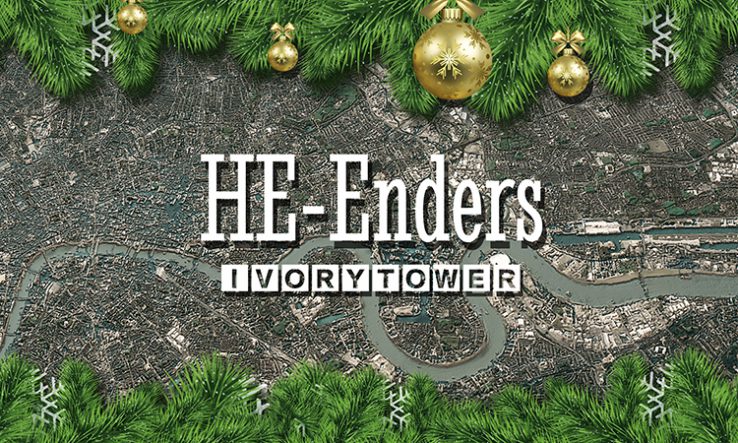 Ivory Tower: back by popular demand, making a soap opera out of R&D plotlines

“Build an attractive, tangible image of R&D in the public’s mind, and firmly connect this to investment… Collaborating with mainstream media to embed research and its outputs in story lines for popular entertainment shows, for example EastEnders.”

Advocating for R&D Investment, report written by Public First for CaSE and the Wellcome Trust 7 July 2020

Cast in order of appearance

Augar Square in Walport, a fictional borough of east London

1. Interior. A flat on Augar Square

Chris Whitty: Leave it out Paddy, I’m trying to write this REF 5b.

Paddy: That’s important that is, it’s ’ow they decide wot science is best and who gets the spondulicks.

Chris: I know, and I’m a bit behind ’cause of all this Covid. So, if you don’t mind just do one.

Paddy: But this is big Chris, look them geezers in Oxford ’ave only gone and dun a vaccine.

Chris: Would you Adam ’n’ Eve it, that was a bit James Last.

Paddy: Says ’ere it should get regulatory approval before New Years.

Chris: That means we can all go down the boozer for a knees-up.

Paddy: According to my oddly still circulating local newspaper, priority will be given to front line workers and the most vulnerable.

Chris: Give it ’ere, let me ’av’ a butchers. We must qualify as key workers, sum ’ow?

Paddy: I reckon we could get some down the market.

Chris: Says ’ere the Oxford vaccine is both low cost and easy to transport, conferring a competitive advantage over foreign alternatives.

Paddy: Wonder if that fella who runs the new caf’ could slip us some.

Chris: The one you can only sit in for 30 minutes due to Covid restrictions?

Paddy: Yeah, Hancock’s half hour they call it.

Chris: Right, you get down the caf’. I’ll get on the blower to my mate Pfizer, see if he can sort us out.

2. Interior. The Duke of York pub

Alistair Jarvis: This is doin’ my nut in.

Al: Nah Nicky, I’m just lookin’ at the detail of the spendin’ review, and there’s nufink in there about student finance.

Nicky: I just wish they’d make up their mind, I’m all at oranges and lemons.

Al: The uncertainty is makin’ it impossible to plan anyfink. It’s puttin’ our world-beating research base at risk.

Nicky: It ain’t the only fing that’s causing uncertainty round ’ere. That Covid’s givin’ me the right hump.

Al: The government is offerin’ loans coverin’ 80 per cent of income lost from international students up to the value of non-publicly funded research activity in any university.

Nicky: It’s a lot more than they’ve given me. A poxy grand for every pub. That ain’t enough to encourage workforce development and skills trainin’. It won’t even cover lost sales for pork scratchings.

Al: You complete dollop Nicky, what we need is a grown-up conversation about the appropriate level of R&D fundin’ in relation to other pressures on the public purse durin’ a pandemic and in the context of that mad Brexit riddle.

Nicky: Don’t you ’av’ a go at me. I ain’t the one who put off a three-year, cross-Whitehall comprehensive spending review.

Al: He’z a right dozy wazzock that Rishi Sunak. Don’t he know that science needs long-term stability, and right now it don’t even know where it’s next transnational fundin’ scheme is comin’ from.

Jo Grady: ’Ere are you servin’?

Al: Wot you after then?

Jo: A pint of Winona Ryder and one of them Scotch eggs.

Al: Don’t I know you? Ain’t you that Jo Grady, general secretary of the University and College Union.

Jo: Who wants to know?

Al: I’d watch myself round ’ere gal, plenty of the regulars are beginin’ to question yer tactics over parallel strikes on pensions and pay.

Jo: Yeah, well anyone want to say somefink to my face, I’ll be in the corner.

Al: They say you’ve lost it.

Nicky: I fink he means the strikes love, your campaign of industrial action ain’t goin’ nowhere at the moment.

Al: You’re all a sandwich short of a substantial meal if you ask me.

Nicky: Leave it Al, she ain’t wurf it.

Jo: London’s goin’ into tier free. You’ll be closed by midnight. [Walks off]

Nicky: I fink this might be the end of us Al.

Al: ’Ere ’av’ a rummage in the charity box at the end of the bar, see if we can apply for one of those non-public research loans.

Gavin Williamson: Maybe we should move it back, Shell.

Shell: That’s the furd time I’ve moved the stall today. It’s been this way and ’at. You said no more U-turns.

Gav: I’m certain this time. Just move it a little bit that way.

Gav: You’ll see, I’m gonna transform this place. It will be a world-class, German-style system just like those Bavarian Christmas markets.

Shell: But people like it the way it is.

Gav: We need to get rid of all the low quality on offer.

Shell: It’s supposed to be a real market Gav, not bleedin’ ’arrods.

Gav: Value for money Shell, that’s the fing. You only know wot it is when you’ve ’ad it.

Matt: Do they work?

Gav: It’s an east London market mate, what do you fink?

Shell: In clinical settings they are 90 per cent reliable in detecting the ’rona.

Matt: Sounds great, can I have 10 million of them?

Gav: Who do you fink you are, one of them vice-chancellors?

Gav: Even though they don’t…

Shell: Leave it Gav. Certainly, mate. They cost £2.50 to make, but we made a donation to the old Russell Harty last year, so we can charge you £9.75 per unit.

Matt: Err… I’m not the best at maths, that sounds about right. Can you deliver them to me lock-up?

Amanda Solloway: It’s nutz in ’ere, I’ve got two drivers off with the Miley, it’s the week before Crimbo, now everyone wants a cab before we go into tier free. And to put the penny whistle on it, some muppet has replaced me A to Z with this R&D roadmap. It may outline future investment priorities in science and innovation but it ain’t no use for runnin’ cabs. Not unless it tells me where I can find some of them driverless vehicles that UK automotive researchers ’av’ been workin’ on.

Mandy: Not now Paddy. I told ye, you and me is through.

Paddy: Listen, I’ve got hold of some of that vaccine.

Mandy: Wot are you sayin’ Paddy?

Paddy: We could go away together, just you and me. Somewhere rates of infection are lower, where pubs are open…

Mandy: It’s against government guidance to go from a higher tier to a lower. I read it on the NHS website.

Paddy: Not over the five days between 23 and 27 December it ain’t.

Mandy: I dunno Paddy, I’ve got to look after the cabs, and Shell needs me, and…

Paddy: It would just be you and me, Mands. We could start over again, we could be a bubble.

Mandy: Oh Paddy, you know I want to but…

Chris: ’Ere wotz goin’ on? I fought you were comin’ back from the market with sum of that Oxford gear?

Chris: Oh, I understand alright. You’re plannin’ on doin’ a runner. Where did he promise to take you love? Somewhere in tier 1? Porton Down woz it?

Mandy: You’ve got it all wrong.

Chris: You ain’t goin’ nowhere ‘til I’ve had my share of the vaccine.

Paddy: It needs to be taken in two shots, four weeks apart.

Paddy: Come on, it’s Christmas. We must all be patient, vaccine distribution is a logistical challenge not seen in this country during peace time.

Mands: It’s just as well the British government is ramping up investment in bioscience infrastructure.

Chris: Shut it, you mackerel. Give me the gear.

Mands: Can I get you a cab mate?

Paddy: Do you know this geezer, Mands?

Mands: Never seen him before in me puff.

Shell: Wotz all this? You got more gentlemen callers than a Shoreditch technology guru. ’Ere Mandy, me and Gav are goin’ down the Duke of York for one last drink before tier free, you wanna come?

Boris: I don’t advise you to mix indoors in a hospitality settin’ with the R-rate this high, cor’ blimey Mary Poppins.

Shell: I ain’t takin’ advice from him. He’s not me dad.

Mands: I’m afraid he is.

Boris: I knew you remembered! Ministrando Dignitas, up the Orient etc.

Chris: But I fought you two were sisters?

Shell: Wotz goin’ on ’ere? This is doin’ me filbert.

Paddy: Wot are you sayin’ Mands?

Mands: Spaceport Cornwall is off, Paddy. I’ve got a new bubble right ’ere, with Boris and my daughter…

Terms of use: this is a free email for fun on a Friday, it should be shared among family and friends like Christmas lunch despite scientific advice to the contrary. Want to buy a job-lot of lateral flow tests? Want to say hello? Email: ivorytower@researchresearch.com Happy Christmas and a Covid-free new year to all our readers. Playbook and Ivory Tower will return on 11 January.