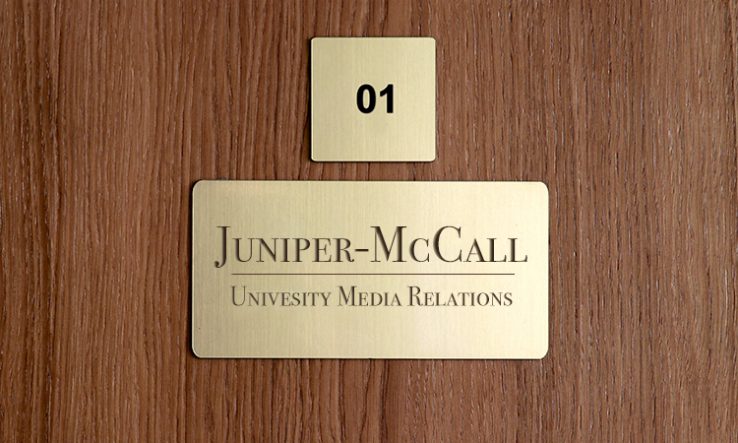 Juniper: Just take it away, it’s the ninth time she’s sent us her CV. Tell her it’s on file and we’ll contact her should there be a suitable opening.

Janet [degree apprentice]: I have done, eight times. Do you have any other feedback? It might stop her calling.

Juniper: Tell her that providing technology lessons in Shoreditch is not a qualification for a chair in computing science at the University of Oxford.

Janet: Well next time she rings, I’m putting her through to you. [sighs and leaves]

McCall: Alexander, have you finished with those recommendations?

Juniper: Hold on, let me look. Yes, maybe, yes to that one, not sure about that one, yes, yes…is it strictly necessary that everyone sit on bean bags and pass the comfort pet to the left as they speak?

Juniper: Perhaps cut that bit, there will be complaints about cruelty to animals.

McCall: What about cruelty to humans, having to go to the annual conference?

Juniper: The National Union of Students has been a breeding ground for some of our most important politicians: Jack Straw, Charles Clark, Peter Mandelson…and not forgetting Trevor Philips.

McCall: Conservatives and reactionaries every one of them.

Juniper: Exactly, having tried to run the NUS, it cures you of any idealism about democracy or accountability. The NUS is how the Labour Party grows its least progressive members. Thus making the party acceptable to the mostly conventional great British public and in time makes them a functioning opposition or government. It’s all part of the circle of life, the rich tapestry of this island story.

McCall: Isn’t it all Momentum and the Young Spartacus League these days?

Juniper: I’m sure in time Momentum will produce an authoritarian Home Secretary of their own.

McCall: Right, I’ll send that over to the NUS. What are we calling the report? I had fancied, “Extending the jazz hands of friendship”.

Juniper: Better not, reform and renewal, the usual sort of thing.

McCall: Aren’t we using that for the Royal Society’s campaign to re-join the European Union.

Juniper: I thought that we’d call that, A wing and a prayer.

Janet: I’m sorry to interrupt but there’s someone to see you.

Juniper: A client? Excellent, show them in.

McCall: How did they get past security?

Janet: Old Bert nips out for a cigarette round about this time.

Juniper: Send them away, this is Juniper-McCall University Media Relations not the Salvation Army.

[A man enters in a beanie hat, fraying gilet, ripped jeans and an “Everybody Wants to Run the World” T-Shirt]

Man: That’s not what I heard. I’m told that over at Universities UK they call you General Booth.

Juniper: Mr Cummings! So good to see you. I’m so sorry, our degree apprentice mistook you as a do-gooder.

Cummings: She’s alright, seems like a bit of a weirdo.

Janet: I beg your pardon?

Janet: I look like a weirdo? Have you looked in the mirror recently?

Cummings: Although, I’d get rid of her in a couple of weeks if she didn’t fit in.

McCall: I’m afraid the degree apprenticeship scheme doesn’t quite work like that.

Cummings: And you must be Oliver McCall, the brains behind this pound-shop McKinsey’s. The man who turned our world-class research universities into hotbeds of free speech-hating snowflakes and intolerant liberal professors.

McCall: But they’re not.

Cummings: I know, loving your work. “The political monoculture of universities”, great idea.

McCall: Yes, that was one of mine.

Juniper: How can we help you Mr Cummings?

Cummings: Alexander Juniper, the man who can make a VC’s first-class air travel look like a mercy dash in a Hercules transporter.

Juniper: We have had some success in the field of university media relations, Dominic.

Cummings: Don’t care. Do you do head-hunting?

McCall: Of course, we offer the full range of executive search services.

Juniper: Did you have anything particular in mind?

McCall: I think he means UK Research and Innovation.

Juniper: I thought you had someone handling that account.

Cummings: They are too good, they keep on bringing us excellent shortlists full of eligible candidates.

Cummings: Of course it is. I don’t want a well-qualified candidate who commands the respect of universities, businesses and parliament.

Cummings: I want someone who isn’t going to object when my ARPA is situated outside the control of UKRI and who won’t interfere.

McCall: Your ARPA? I was unaware that you were personally in charge of the Advanced Research Projects Agency.

Juniper: Of course you are, Mr Cummings. We have a unique range of clients on our books. Janet could you bring in the executive talent file.

Juniper: The big green folder propping up the fish tank.

Cummings: I don’t want a former vice-chancellor. I want someone who knows what side their bread is buttered, who is easily influenced and with little moral compass.

McCall: Are you sure you don’t want a vice-chancellor?

Cummings: I don’t want establishment. I want a disruptor, a weirdo and misfit who’ll think outside the box…and who’ll do what they’re told.

Juniper: Thinks outside the box and does what they are told, that’s a tricky one.

McCall: Have you thought about Gary Lineker?

Cummings: I don’t want a Remoaner. I don’t want some chorizo-sniffing Twitter-ghoul making the case for membership of EU funding schemes. I want someone who will instinctively toe the government line.

McCall: Have you thought about John Humphries? He’s looking for work after the Today Programme.

Cummings: No journos. Don’t want journos telling the government what to do.

McCall: No, that would never do, now that the government is full of journalists telling the rest of us what to do.

Janet: Here’s the file, Mr Juniper. Looks like it’s been under the fish tank for a while. It’s still got Keith Joseph in there.

Juniper: As I say, a unique range of clients.

McCall: I think even this government draws the line at resurrecting the dead.

Juniper: I don’t know, what about the career of Gavin Williamson? Now, let’s have a look. Yes, maybe, yes to that one, not sure about that one, yes, yes…

Cummings: What have you got?

Juniper: We are looking for someone who can start straight away?

Cummings: What is this, Patchy and Patchy? I think I’m wasting my time here.

Juniper: All part of the profiling process, getting to know the needs of our clients. You want someone lacking self-awareness but with strong right-wing views and an amateur interest in a branch of science, such as, say, eugenics?

Cummings: Give me strength.

Cummings: What area of science does he know?

Juniper: How about a former cabinet minister with wide experience of running vital public services?

Cummings: I know I should have gone to Halliburton.

Juniper: How about someone who is well-liked in the north?

Cummings: I want someone with a veneer of academic respectability.

Juniper: Someone with a PhD?

Cummings: Ok, I’ve had enough of this.

Cummings: I just hope you two clowns aren’t on a government retainer anymore because I’m going to go back to Downing St and have your names put on the pariah list, next to Dominic Grieves and Prince Andrew.

McCall: You can’t do that, without our government contract whose going to pay for old Bert downstairs? My membership of the Athenaeum?

Janet: May I be permitted to make a suggestion? We’ve just had this fresh CV arrive today.

Cummings: Go for it kid, you can’t do worse than comical Ali and Oliver’s barmy.

Janet: Perhaps you need someone from outside the UK system.

Janet: But who knows how to press the prime minister’s buttons.

Janet: An expert in technology.

Janet: That’s one way of putting it.

Cummings: But it has to be someone who knows the UK funding system.

Janet: I believe, they’ve been in receipt of several grants.

Cummings: Sounds excellent, will people have heard of them?

Janet: Oh yes, and they’ll tick a few of your diversity boxes.

Cummings: Not another old man with a walrus moustache?

Janet: A young woman in fact.

Cummings: Great, let’s run this candidate up the pole and see if they flutter.

Janet: Funny you should say that.

Juniper: Janet, what are you doing?

Janet: Perhaps we could arrange a phone call between Mr Cummings and our preferred candidate, in the first instance.

McCall: Sadly, it would mean that she was off our books and she would stop calling us, Alexander.

Juniper: I see, an excellent suggestion. We’ll set that up for you Dom, expect a call from us later today.

Cummings: Brilliant, Boris can be on the call as well, he’s going to be very surprised.

McCall: He certainly will.

Cummings: Gentlemen, and weirdo, I congratulate you. Your government retainer is safe for another year. Wherever, the dark arts of university media relations are practiced people will sing the names of Juniper-McCall.

Juniper: That is good news, Dominic. Now, I wonder if I can interest you in a set of trailblazing democracy reforms we’ve been working on?

Terms of reference: this is a free email for fun on a Friday. It should circulate widely like an invoice for article processing charges at an Open Access conference. Want to send your CV to Juniper-McCall’s executive search file? Want to say hello? Email ivorytower@researchresearch.com