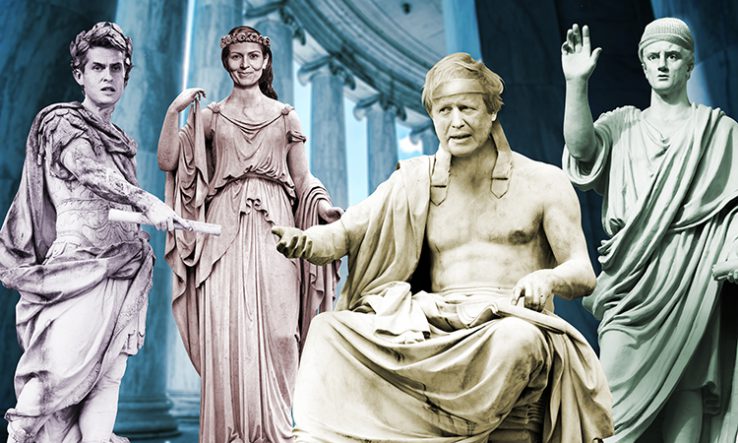 Ivory Tower: we set off for an Odyssean summer blockbuster

In media res [in the middle of stuff—Ed.]

Somewhere in the Agean Sea…

Boris: Blimey, it’s hotter than a Shoreditch technology lesson. How many days have we been at sea now, Dominicles?

Dom: Just over 100, Boris, son of Stanley, proprietor of Greece.

Boris: Is this what you mean by an Odyssean education?

Dom: No, I was talking about Conservative party policy on universities.

Boris: How so, blind sage?

Dom: You go round and round in circles for ages, not making much progress, and then finally end up back where you started and helping out the elite.

Boris: But we’re different, aren’t we, Dominicles? We are the Brexonoughts. We are on a quest for the golden fleece.

Dom: Well, someone will be fleeced by the end of this.

Dom: This is definitely further than when we drove to Barnard Castle.

Goveus: We’ve actually passed several ports. Turns out we are not allowed to dock.

Boris: Because we are boldly making our own way on the high seas?

Pritipatelenia: Because we stopped freedom of movement?

Hancockus: Because we would be quarantined.

Boris: Gosh, that’s rotten luck. Where is my messenger?

Boris: Why is he speaking like that? Is he from Sparta?

Dom: No, he went to Bradford.

Boris: Bradford College? Is that in Cambridge?

Boris: That’s confusing. Right Brad Pitt, or whatever your name is.

Boris: Tell me, loyal follower, where you hail from, do they sing songs of your achievements?

Gavinicus: At the Department for Education?

Boris: Yes, do the academy record your many accomplishments in verse?

Boris: Do they write in prose?

Gavinicus: Nay, I ain’t got none.

Dom: He’s the secretary of state for education. The one they call Frankus Spencerus.

Boris: Is that Latin? I always get my nominative and my ablative mixed up.

Donelanestra: Don’t tell me you did one of those popular-sounding courses.

Donelanestra: What sort of serious job can you get with Classics?

Boris: But, I’m leader of the Conservative party.

Donelanestra: As I was saying…

Donelanestra: Is that what you say at BEIS meetings?

Dom [in a trance]: Leave at least £800 million in a brown envelope marked “advanced research projects” in a service station on the A1… make it in roubles… no reason…

Boris: Blind seer, what are the gods telling you?

Dom: The one you seek is among us.

Goveus: He speaks in riddles. We are on a quest for the golden fleece, which alone can cure the plague that ravishes our land.

Dom: Look no further, you hold the seeds of doom.

Pritipatelenia: I said we should have thrown him overboard after Durham.

Dom: Give NHS data contracts to these companies… no need to look at the detail… no reason…

Boris: It is an ill omen, indeed. The words of the sage Dominicles trouble me greatly.

Boris: My seeds are doomed. That’s also what the goddess Arcuri told me.

Goveus: Land! We have reached the island of Arpa, home of the great fleece.

[After a day and a night, the Brexonoughts reach the river Stinx, where they are met by a hooded figure with a boat]

Boris: Speak, mysterious stranger, for we seek the golden fleece.

Starmeres: I am happy to work with you constructively, but while I support your quest, finding the fleece will be too little, too late.

Boris: Boatman, you are nought but a taxi rank, taking whatever job comes your way. You really need to decide which side you are on.

Starmeres: I am the keeper of the underworld.

Goveus: That’s one way to describe the Labour party.

Starmeres: If you wish to cross the river, you must answer straight, three questions.

Sollowaydite: Not if he can help it.

Starmeres: Tell me leader of the Brexonoughts, where were you on the night of 23 March?

Dom: I was lying doggo with coronavirus.

Hancockus: I think he means Boris.

Boris: Um err… I was at home with Carrie and definitely not at the temple of Bacchanal with the nymph calypso…

Starmeres: Is this a picture of you addressing the nation, commanding the people to go into lockdown?

Hancockus: It can’t be him, because we all know that the country went into lockdown on 16 March.

Donelanestra: Do we? I thought we’d agreed that you can’t rewrite history.

Dom: It’s something we are trying out before the public inquiry, to see if anyone buys it.

Starmeres: Come along, it’s an easy enough question to answer.

Boris: That’s not a genuine picture.

Boris: It’s all Greek to me, Mr Speaker.

Starmeres: I have here a scroll from Patroculus Vallancus, which states, “It is the view of all the sages of medicine and science that the government has misunderstood our advice on washing its hands.”

Boris: Poppycock. At all times we have followed the wisdom of the philosophical advisory group on emergencies.

Goveus: We were actually following the UK’s domestic alternative to the EU Galileo satnav system.

Sollowaydite: Is that why we’ve been going round and round the Isle of Wight for weeks?

Hancockus: I think that was due to interference from the track and trace app.

Donelanestra: I’m surprised you could get a signal on the Isle of Wight.

Sollowaydite: I’m surprised you could find anyone who doesn’t still use a landline on the Isle of Wight.

Starmeres: Is that the best you’ve got?

Boris: Yes, and you’ve just used your three questions boatman. You must now allow us to cross over to the other side.

Starmeres: I think most of this lot did that a while ago. Alright, get in the boat, stand two metres apart, no touching.

[The Brexonoughts head towards a clearing]

Donelanestra: What are all these offensive statues?

Boris: That’s no way to talk about the cabinet.

Sollowaydite: Are we at Oriel College?

Gavinicus: They’re past ’eroes turned to stone by the Gordon.

Goveus: Is he trying to say Gorgon?

Gavinicus: Nay, the Gordon of the black pool, former minister of the shadows for universities.

Boris: Tish, the Gordon was slain when I smashed the red wall. Onwards to the golden fleece, there it is hanging from that bough.

Sunakus: Not so fast, Boris the progenitor.

Sunakus: Only I know the secrets of the golden fleece and the magic money tree.

Dom: This guy? But we gave him the keys of the treasury so that he would do what he was told.

Hancockus: How’s that working out for you?

Sunakus: The plague has changed everything. Now, I am the hero of the people with my two-for-one kebab offers.

Boris: Stand aside nemesis. I must have the fleece and know the mystery of the plague which has laid waste to my country.

Sunakus: But you already know who is responsible for the ruin, Boris Rex.

Dom: He is referring to how Oedipus searched Thebes to find who had brought plague upon the city, only to discover that he was the one who was responsible when he murdered his father and slept with his mother.

Sunakus: Look no further for the cause of all the country’s woes. It is you, Boris, father of legions.

Boris: Is this how our voyage ends? After our adventures with the UKRIs, the delay of the Augar, the defeat of Queen Theresa and the deal-seekers, the betrayal of the Ulster Unionists, the great prorogation, the vanquishing of the Corbynites, the siren call of many, many universities’ ministers, the victories at Brexathon and the crushing of the Faragites, and the loss of my own brother, twice. Is this how it ends? Outshone by my own bag carrier during a crisis caused by me?

Boris: So, what did Oedipus do?

Goveus: I believe he gouged his eyes out, and in his blindness dispensed his opinions in return for coins to anyone who would listen.

Boris: He became a Telegraph columnist?

Boris: All right Brexonoughts, back to the ship. How long is the journey ahead of us?

Hancockus: For us, four years. For you, who can say?

Boris: Hurrah! Let’s go home via the Black Sea. Got any of those roubles left, Dominicles?

Dom: What an Odyssey.

Sollowaydite: What a carry on.

Terms of use: This is a free email for fun on a Friday. It should be shared widely, like generous Russian political donations. Have a great summer, from everyone at Ivory Tower. Send your staycation snaps to ivorytower@researchresearch.com