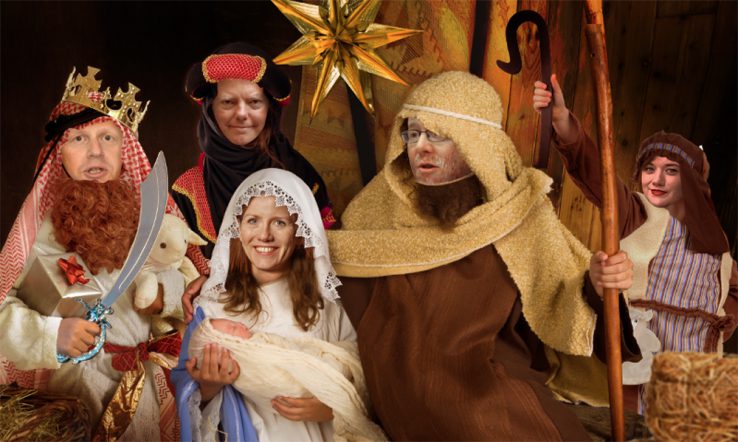 1.1.  The angel of the Lord appeared unto Micky and sayeth, “Good news, for unto us a white paper is born.”
1.2.  And Micky sayeth to the angel, “Art thou sure, for that seemeth very unlikely?”
1.3.  “Go unto the town of Minster in the West,” the angel told Micky, “and there you will find, wrapped in a brown scroll on a table in Prêt à Manger, a newborn paper, and you will call it Augar.”
1.4.  “Where hath I heard that name before?” asked Micky.
1.5.  The angel gaveth a great sigh and sayeth, “Travel with a donkey.”
1.6.  But Micky said unto the angel, “That is no way to speak about Nadhim Zahawi.”
1.7.  The angel sigheth once more and in parting sayeth unto Micky, “Take a birthing partner with you. Mandy is no longer available, so George Freeman will have to do.”

2.1.  In the East a star was seen, but the Pharisees of the REF panel refuseth to fund it, for they sayeth that whilst it giveth light conducive to producing research of nationally recognised quality, in terms of vitality and sustainability one star meriteth not sheckels.
2.2.  But three wise men—named Whitty, Vallance and Van-Tam—followeth the star unto Minster in the West. They traveleth for many days and nights, for they did take the Northern line and changeth at Bank.
2.3.  The wise man named Vallance sayeth, “But everyone knoweth that I am the real star.” At which the one called Van-Tam rolleth his eyes unto the heavens.

3.1.  At this time in the land of Minster in the West ruled a king named Boris who had many wives and had begat a vast progeny. He was not a wise king but he got Brexmas done and hath an 80-seat majority so no one at court asked questions.
3.2.  It is told that when Arcuri danced before Boris, he did promise her anything in return for technology lessons.
3.3.  The people thought Boris a vain and foolish king and did long to be free of him.

4.1.  The three wise men arriveth at the palace of Boris to ask for directions to Prêt à Manger, but the court was making merry with much drunknenness and licentiousness.
4.2.  And the wise man named Whitty sayeth unto Boris, “Be this a party?”
4.3.  But Boris sayeth, “No, for all of the guidance hath been followed.”
4.4.  “But,” sayeth Whitty, “that man hath tinsel round his neck, and that one weareth a jumper that sayeth, ‘Ho, Ho, Welcome to the Christmas Party.”
4.5.  And Boris, who carrieth a box of Trivial Pursuits, sayeth, “I certainly hath not been involved in any wrongdoing.”
4.6.  Then the one named Whitty sayeth, “But those people singeth karaoke, and that man hath just photo-copied his bottom.”
4.7.  And Boris looketh to Carrie, his queen, who did hold a babe in swaddling clothes, and then back at the three wise men, and waving a scroll at them sayeth, “Why don’t you boys come in for a drink?”
4.8.  But Whitty sayeth, “Be that an invoice for catering with a party hire company?”
4.9.  With that Boris did try to hide his scroll inside his tunic and starteth to blather about booster jabs and went back inside to his “business meeting”.

5.1.  Then Micky and George saw a great light, for they hath stopped at a zebra crossing on the North Circular.
5.2.  And Micky sayeth unto George, “The angel sayeth that we must travel with a donkey.”
5.3.  And George sayeth unto Micky, “One ass in this car is enough, and the Jaguar will get us there much quicker, but remember to render unto Caesar the congestion charge.” And so they continueth on their journey.

6.1.  The angel of the Lord then appeareth unto shepherds who were tending their flocks.
6.2.  “Be not afraid,” sayeth the angel, “for I bringeth good news for all the people.”
6.3.  And the general secretary of the shepherds sayeth, “That is all very well, but in making your annunciation thou hast crossed a picket line.”
6.4.  “Eh?” sayeth the angel of the Lord, who by now did wish that they were working from home.
6.5.  “The shepherds art on strike,” explaineth the general secretary, “for management cutteth our benefits and we wanteth more sheckels.”
6.6.   “I see this is going to be a long night,” sayeth the angel.

7.1.  And lo, Micky and George did reach the Premier Inn, and they knocketh on the door to seek shelter.
7.2.  “We are exceedingly sorry,” sayeth the innkeeper named Jarvis, “for we art totally full and hath not a spare room, nor a spare sheckel, nor nothing, for we art all as poor as church mice, and all my members art unanimous in that.”
7.3.  And George sayeth unto the innkeeper, “You doth mistake us for shepherds. We art ministers and hath a housing allowance for SW1.”
7.4.  “Why doth thou not sayeth that before?” replied the innkeeper. “We hath just had a cancellation from a couple and their infant from the land of Palestine who hath been turned away at the border by Patel of the tribe of Pritster.” So, the innkeeper foundeth Micky and George the last two en-suites with a view of the park.
7.5.  Then Micky and George continueth on their way in search of Prêt à Manger, where the paper named Augar would be born.

8.1.  Much time hath passed, and still the angel of the Lord was in negotiations with the shepherds.
8.2.  “We wanteth a new evaluation based on better assumptions,” sayeth the general secretary.
8.3.  “Look,” sayeth the angel, “a white paper is about to be born and it hath good news for all mankind, do you wanteth in or not?”
8.4.  “I recognise not those pronouns,” sayeth a shepherd.
8.5.  “Good point, as a celestial being I am non-binary,” sayeth the angel.
8.6.  “It’s not good news for students,” sayeth another shepherd. And a third sayeth, “We shall escalate this action for maximum disruption, even if we must striketh on Christmas Day.”
8.7.  “I hath got to go now,” sighed the angel and left the shepherds to standeth around their brazier.

9.1.  And lo, Micky and George ordereth two flat whites and did sit at a table in the window of Prêt à Manger as they awaited the arrival of the white paper.
9.2.  The wise men entereth the Manger and laid before Micky and George gifts, saying, “We come to praise the newborn.”
9.3.  “I bring it frankincense,” sayeth Vallance. “It cometh from my own range of musks and colognes.”
9.4.  “I bring it myrhh,” sayeth Van-Tam, “because we hath run out of lateral flow tests.”
9.5.  “And I bring it a risk assessment to complete as soon as it is able,” sayeth Whitty.
9.6.  “Hath no one brought gold?” asketh Micky.
9.7.  The wise men shooketh their heads and sayeth that there were no shekels in the Treasury any more, and that all policy initiatives should henceforth be cost neutral.

10.1.  Suddenly, a great company of the heavenly host appeared, led by the angel of the Lord, and they sang,
10.2.  “Hallelujah, thank God, at last we have a white paper.
Praise the Lord, for finally we have a response to Augar:
Goodwill on Earth to all, within defined limits,
Of prior attainment at GCSE and within the financial limits.
Implied by number caps for “low-quality” courses,
As defined by graduate earnings data.
Glory be to STEM and to cyber,
And lead us not into the arts,
But reduce the burden of regulation.
Something, something about skills.
Tuition fees to decline in value with inflation.
Messages ends.”
10.3.  And lo, George did scratch his head in wonder and Micky pondered all these things in her heart for she knew that there was little chance of them ever making it onto the Downing Street news grid.

Terms of reference: this is a free email for fun at Christmas. It should circulate widely like a No.10 press officer at a business cheese and wine where all guidance was observed. Want to pre-order a copy of the higher education white paper? Seriously? Have you not been paying attention? Honestly, it’s enough to make you look forward to dry January. Email ivorytower@researchresearch.com