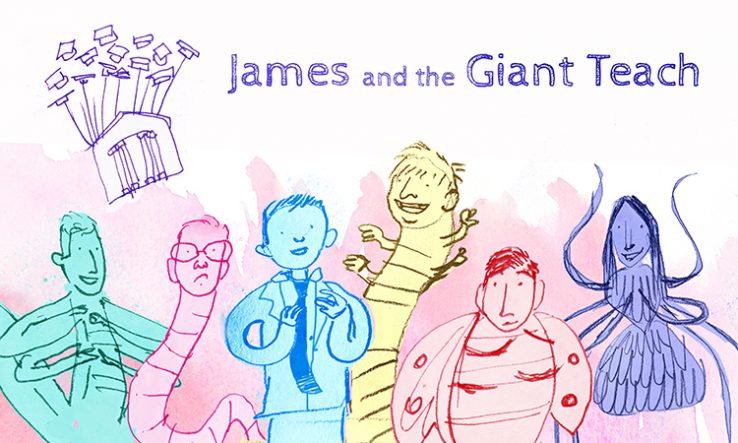 Once upon a time, long ago, there was a little orphan named James. Well, when we say “long ago” we mean last week, and when we say “orphan” we mean political consultant, but let’s not split hairs.

James was not an ordinary boy, he was special. He was a boy of great foresight. He was the first Conservative MP to lose a seat in the red wall of the north long before anyone had heard there was a wall in the north or that it had indeed once been red. His foresight had put him ahead of many of his colleagues in the 2024 general election, which will coincide with the end of this present lockdown.

But that was long ago. James could no longer remember the north now. As minister for the Northern Powerhouse he had spent most of his time in Abigails. Now that he eeked out a living as a think tank fellow, political consultant and member of the house of Lords, he longed once more for public service.

He had tried everything: chair of the Sports Ground Safety Authority, non-executive director at the Historic Manuscripts Advisory Council, president of the British Potato Council. Anything would do, anything with a two day a week commitment and a generous stipend—sadly the regulator for dairy manufacture, the Cheese Board, had been swallowed up in the early 1990s.

One day, a letter arrived for James. It was not like the others he had received from the executive search agency, this one had a portcullis crest on it and was addressed to “James, my BFF, Lord of Yarm”. James opened the letter. It said that he should go to the end of his garden to find something amazing.

He opened the French windows and walked across the patio. To his amazement at the end of his garden stood a building he had never seen before. It looked very much like the sort of building you might find in a university, if you didn’t really know what universities looked like or what they did and you derived all your knowledge of them from watching repeats of Inspector Morse on ITV4.

James opened the large wooden door and went inside. He was surrounded by books as if he was in an enormous archive. “Wow”, said James, “is this where the books went when George Osborne closed all the libraries?”

“Hello there old friend,” said a voice. James gave a start, it was a strange voice. The strangest thing about it was not the fact that it came out of the mouth of a giant grasshopper but the way it kept flipping between the solicitations of someone trying to sell unwanted fireplaces and one of the Tetley Tea folk.

“Who are you?” James asked the grasshopper. “I’m Gavin”, said Gavin. “Gavin the grasshopper, don’t you remember me?” James racked his brain, but he was pretty sure he would remember having met a huge insect before. He shook his head.

“Oh that grasshopper, but you were tiny, what happened to you?” asked James, but before Gavin could answer, they heard a “shush!” come from somewhere. James looked around and saw an enormous worm sitting at a desk, stamping pieces of paper.

“Oh that’s Gove,” just ignore him said Gavin to James. “I guess you must be some sort of bookworm,” said James cheerfully. “No,” said Gove nonplussed, “I’m just a worm”.

“Where am I?” asked James. “Doesn’t he know?” said Gove turning to Gavin. “No, he’s joost arrived,” said the grasshopper, beginning to cheer up now that his old friend was here.

“Very well then, this is the Office for Students,” said Gove, stamping papers as he went along. “Is it a magical place?” asked James, wide-eyed with wonder. “No,” said Gove just as nonplussed as before.

“Are these all the books in the world that hold the repository of all human knowledge?” asked James looking around in amazement. “No, that’s called the internet. These are statutory returns of statistical data from registered providers of higher education since 1st January 2018,” said Gove, stamping away.

“But there are so many of them. I’ve never seen so much paperwork,” said James incredulously. “We prefer the term ‘red tape’,” said Gavin. “Funny thing red tape,” said Gove, “the more you try to cut it, the more there seems to be of it.”

“I got a letter telling me to come here,” said James holding out the opened envelope. “I know, I sent it,” said Gavin grinning from antenna to antenna. “I see,” said Gove, taking hold of the letter.

The worm read the letter and sighed. “Is he the one then?” Gove asked Gavin. “Yes, please,” replied the grasshopper. “This will need the rubber stamp,” said Gove and taking an outsized seal from the end of the desk, he made a print on the letter.

“Congratulations,” said Gove, “You had better go see Shelly”. “Congratulations on what?” asked James, staring at the stamped letter. “You are now the chair of the Office for Students,” said Gavin the grasshopper, “your appointment has officially been rubber stamped by the worm from the cabinet office”.

“Chair?” said James, “does that mean I get to be in charge?” The worm and the grasshopper both laughed. “Of course not,” said Gavin, “we’re in charge, you are our totally independent best friend arms-length regulator who takes the government whip”.

“I see,” said James, not really seeing at all. Just then, a huge spider appeared from the ceiling, descending towards them on a trail of silk. “Ah, here’s Shelly, now,” said Gavin.

“Is this him?” said the spider looking James up and down and being none too impressed. “He’ll do I suppose. You had better come see Boris,” she said picking James and Gavin up in her eight legs and ascending back towards the ceiling.

“Do they call you Shelly because of your poetic soul?” asked James, feeling a little giddy from the altitude. “No,” said the spider nonplussed. “Shelly is just her name,” said the grasshopper, “we try not to encourage things like poetry at the Office for Students.”

“And none of that music or art or drama…or the M word,” said Shelly. “Definitely not the M word,” muttered Gavin. “Maths? Medicine?” said James, wondering what the forbidden term could be. “Media,” hissed the spider and the grasshopper gave a little wince at the mention of the word. “But?” said James, moving from wonder to confusion. “Not now,” said the spider as she sat James and Gavin down in front of an enormous centipede who seemed to be using his many hands to work two typewriters at the same time.

“What’s going on?” asked James, beginning to ask the sort of questions that he should have done at the start of this story. “Golly gosh, what an inquisitive little chap,” said the giant centipede, “haven’t you seen someone write a column for the Daily Telegraph before?”

“Not like that,” said James. “It’s Boris’ patented method,” said Gavin, “he uses two typewriters to write two columns simultaneously arguing the exact opposite of each other”.

“This is the boy we were talking about,” said Shelly the spider interrupting the chat. “Which one? Gavin’s imaginary friend?” asked Boris.

“He’s not imaginary. Look, he’s real. He has arms and legs and a head of his own,” said the grasshopper, pleased with himself. “As long as he doesn’t have opinions of his own, he’ll be fine,” said the spider, starting to spin a web among the piles of books.

“Yes, quite right, no one ever got on around here by having anything in their heads. Just blind loyalty to the giant centipede,” said Boris, “how to you feel about Brex…” Before the centipede could finish his question, the library—if it was a library—began to shake and seemed to float upwards.

“Oh dear, it’s hoopening again,” said Gavin the grasshopper. “Your vowels? I noticed that,” said James. “No, he means the Office for Students is taking off. We are going on another magical adventure,” said the centipede, “and I haven’t finished this column on why the French hate kittens”.

James looked out of the window and could see clouds passing by. “I think I’m going to be very happy here,” said James. “Save it for the select committee,” said Shelly as she settled down to sleep on her web.

Terms of use: this is a free email for fun on a Friday. It should be shared widely like contradictory travel advice from ministers. Want to order the audio book of James’ adventures in university regulation? Want to say hello? Email ivorytower@researchresearch.com