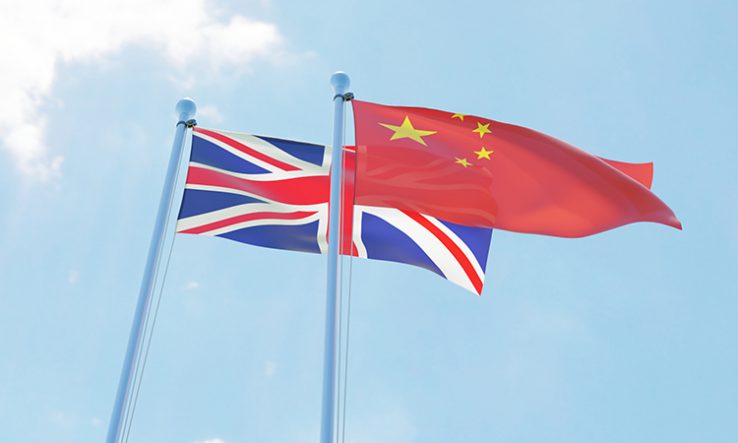 China is on track to become a dominant global research power. Its R&D spending has grown fourfold in the past 10 years to match that of the United States and the European Union. It publishes more papers than the US and its output is set to overtake the EU. The relative quality and capacity of its research in technology rivals any other country. And it is ramping up its biotech activity.

Opinion, though, is divided on whether UK researchers should be collaborating with China. In October, UK Research and Innovation (UKRI) and the National Natural Science Foundation of China announced five multidisciplinary collaborative research projects to address the shared challenge of ageing societies. By contrast, a story in The Times on 8 February claimed that “almost 200 British academics are being investigated on suspicion of unwittingly helping the Chinese government build weapons of mass destruction”, and a February report from the think tank Civitas claimed there were extensive links between UK universities and  Chinese institutions with military connections.

This mirrors a global debate. There have been a plethora of stories about Chinese influence on research in the US, as well as some bribery scandals. On 14 January, the US Department of Justice announced that Gang Chen, a nanotechnology professor at the Massachusetts Institute of Technology, had been arrested and charged with fraud for failing to disclose contracts with China.

In Europe, Maria Cristina Russo, director for international cooperation in research and innovation at the European Commission, told a League of European Research Universities event on 11 February that discussions with China on a framework for science cooperation had “red lines” where the Commission needed better data access and innovation opportunities. In Australia, the government is pushing through a foreign relations bill with powers to amend university agreements with overseas institutions that have a “substantial degree of foreign government control”.

Against this backdrop, where does UK-China collaboration stand and how much does it matter to the UK’s research profile?

In a report on the UK-China academic interface, to be published next week by the Policy Institute at King’s College London, we show that such collaboration already makes up a significant proportion of the UK’s science, both in volume and in impact. We argue that these collaborations bring huge benefits but that, for continuing success, academics, institutions and policymakers need to be more engaged in understanding and managing this relationship.

To get a picture of UK-China research links, we analysed Clarivate’s Web of Science database of global publications and their citation impact across 254 journal categories from 1981 to the present.

Ten years ago, China was the ninth most common international collaborator on UK-authored research papers. Now it ranks second, behind only the US.

In 2019, UK-based researchers co-authored 16,260 articles and reviews with China-based colleagues—around 11 per cent of the national total. For 2015-19, in comparison, the average was around 8 per cent.

More than half of the 2019 publications were bilateral, with no third country on the author list. Almost three-quarters acknowledged funding from a Chinese research agency, up from just a handful in 2005.

Chinese research in general is skewed towards technologies related to heavy industry, and China publishes five to 10 times more papers than the UK in many areas of technology and physics. But it has also moved into the life sciences and now publishes three times the UK’s volume in molecular biology, pharmacology and environmental sciences.

There are around 100,000 Chinese postgraduates in the UK, making up 24 per cent of international students. The Higher Education Statistics Agency reports that, while applications from the EU are falling, those from China have grown by 21 per cent in a year. The Higher Education Policy Institute recently calculated that Chinese students, both undergraduate and postgraduate, contributed £2 billion in tuition revenue to university budgets and another £2bn elsewhere in the economy.

Our analysis is the first picture of the extent to which China now contributes to UK research, and it provides a context for any discussion of the two nations’ future relationship.

That context includes the nature of collaborations as well as their number. Here, it is perhaps surprising that the focus of joint research is on areas in which China is already strong, rather than in UK strengths such as the biomolecular sciences.

Our analysis reveals, for example, that over a quarter of UK output in 10 categories of technical and physical sciences; over a third of publications in automation, control systems and telecommunications; and about 1,000 papers per year in electronic engineering and materials science across 2015-19 were co-authored with China. Collaborations with China are, to all intents and purposes, now driving UK publication growth in mechanical engineering, nanotechnology and telecommunications.

These collaborations are also enhancing the impact of that research. Ten years ago, the citation impact of UK-China collaborative papers was average at best; now, such papers are often cited at twice the average global rate, compared with 1.4 times the global average for UK papers overall. UK-China papers in telecommunications are more frequently cited than those authored with EU partners.

Those, then, are the benefits. Now for the caveats. One is the preponderance of technology research. China has a bigger research gap to close in the life sciences, so collaboration in those fields would give it more of a boost. The UK’s excellent molecular biologists may already be saturated with leading-edge overseas partners, however, while our technologists and materials scientists have a better view of opportunities emerging from China’s research portfolio.

Another source of concern is that these research areas touch on technology central to the economy. Is the UK an equal partner and beneficiary of the work? Do we know how much of this collaborative activity is based in the UK and what allied work is happening in China? Do we always know how the emerging technologies are being developed? It seems likely that the UK has at best a partial view of the much bigger Chinese end of the projects to which it contributes.

The sheer scale of China’s research in technology and the physical sciences gives it a broader view of these fields and of the routes to further innovation. Cutting the UK off from that knowledge base by severing ties with China would be madness. Instead, the route for the UK must be to improve its awareness and understanding of the Chinese end of the relationship and develop a basis to manage and mitigate contingent risks, real or perceived.

The US faced a similar dilemma when it recognised that collaborations with China dominated many of the areas prioritised in the Office of Science and Technology Policy’s forward plan. More than 40 per cent of US telecommunications papers are co-authored with China-based researchers, for example.

The Trump administration’s last National Security Presidential Memorandum, published on 14 January, addresses these issues. It sets out priorities and a structure for protecting international research collaborations against foreign government interference and exploitation of R&D. It recognises that research must be broadly shared, open and collaborative to enable innovation and economic competitiveness. But it also sets an agenda for more formal and structured relationships, which could be a valuable reference point for the UK.

The memorandum lists a suite of protections for international R&D cooperation. These include: enhancing awareness of research security risks and protections; strengthening disclosure requirements and processes; limiting access and participation; vetting foreign students and researchers; and sharing information across government agencies. It recognises that research institutions need more information to effectively manage their international relationships, and that researchers and officials should receive training in research security and in risk identification and analysis.

These approaches may not appeal to an academic research community that expects to be largely self-managing and to make its own decisions about research partners and projects. But given the mix of political sensitivity, national interest and public money involved, it is unreasonable for academics and their institutions to expect an entirely free hand. Consensus between academia and government would be better than ending up with a legislative approach such as that pursued in Australia.

Whatever is done, it will be essential for the UK, like the US, to remain committed to the principles of open science. This means protecting the free exchange of unclassified fundamental research while strengthening controls over access to specific applications of research, usually related to national security.

A first step might be for UKRI to audit projects and to establish clear, common, contractual arrangements for bilateral research against a template agreed with Universities UK and the government.

Beyond this, UKRI could also monitor the emerging dependence on China of some areas of technology research by carrying out an annual risk assessment of the UK’s dependence on third countries across different areas of R&D. Making this part of the agency’s horizon-scanning work would create an early warning system for policymakers.

The aim must be to make research collaborations comprehensively bilateral. If you’re not seeing the lab benches at both ends, do you really understand the methods, the problems and the outcomes? All parties should take steps to ensure a two-way flow of knowledge, supported by reciprocal access based on regular visits to Chinese laboratories and enhanced incentives to place UK researchers in China.

There is much to gain from developing engagement with China, but it must be a transparent, and equal relationship if it is to stay fruitful and healthy. It is the UK’s responsibility to make that work, rather than calling foul should its vigilance go awry.