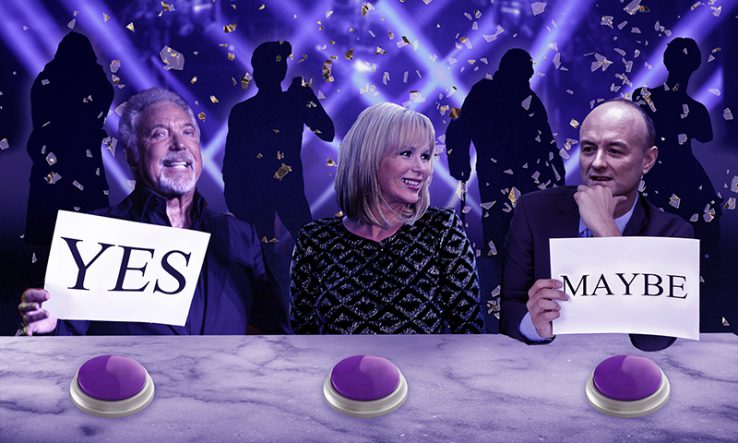 Ivory Tower: a new music competition on BBC HE

BBC Head of Programming: …anything else?

BBC Head of Commissioning: What’s that about?

McCall: Each episode visits a university campus with a contested statue. Rather than remove the statue we bring in a pop star to write a song about it to retain and explain.

BBC Head of Programming: What pop star would do that?

McCall: Obviously ones who don’t know anything about the issue. We’ve approached Roger Daltrey, Van Morrison and Noel Gallagher.

BBC Head of Programming: Ok, I think we are done here…

Continuity announcer: Now on BBC HE, if you liked X-Factor and loved The Voice, your Saturday evening viewing continues with our new show, live from Salford, Musical Statues.

The auditorium at The Studios, Media City Salford.

O’Leary: It’s our new show in which we retain and explain!

O’Leary: Tonight, you will see two competing acts: two statues and their musical sponsors who will be making the case to retain and explain. You will have your chance to vote once our phone lines are open. But first let’s meet the judges.

O’Leary: He knows a thing or two about being a national treasure, and he ticks a box for our devolved nations quota. It’s Sir Tom Jones, ladies and gentlemen.

O’Leary: Are you ready for the show, Tom?

Jones: I know about musical statues, I once sang a duet with Cher. Mostly plastic, she is.

O’Leary: Amanda, have you ever been seen with a controversial figure?

Holden: I shared the Good Morning sofa with Phillip Schofield for four years.

O’Leary: Lovely stuff, and completing our line-up, every show needs a nasty judge, so here’s Mr Culture Wars himself, former chief adviser to the prime minister, Dominic Cummings. Are you ready to pass judgement, Dom?

Cummings: Did you see my select committee evidence?

Provost: I never thought we’d ever have this opportunity. This is our moment to shine. Over the years we’ve had our critics and a lot of people have said that we should pack it in. But I always believed that we had something to offer. I would be made up if we won tonight and we had the chance to retain and explain, but it’s all about being here, we are lucky to have got so far. I’m dedicating this to all the university’s students and staff—obviously not the ones who are boycotting us, which is most of them, to be fair. When they said that the WHO wanted to help us retain and explain Cecil, I was so thrilled. I’ve always been a big fan of the World Health Organization. Then they told me it was a band called The Who and I thought, whatever, as long as we are still on the telly.

O’Leary: They won’t be fooled again, here is Roger Daltrey and the Oriel College Cecil Rhodes statue, singing “My Generation [who voted for Brexit]”.

This is my generation
This is my fixation, Brexit

O’Leary: What a start to our show! Let’s go to the judges. Sir Tom, what did you make of that?

Jones: Truly I have never seen anything like it. I ain’t seen a cover that bad since I stayed in the Two Swans hotel in Carmarthen Bay with Shirley Bassey and JPR Williams.

O’Leary: Amanda, were you convinced by this old relic?

Holden: I said yes when Les Dennis proposed, so it’s in the same ballpark.

O’Leary: Dom, what are you thinking?

Cummings: I’ve never seen anything so stiff and unnatural.

O’Leary: But enough about Roger, what did you think of the song?

Cummings: This is supposed to be a culture war. But I’m sorry, my advice would be if you are thinking about a career in culture, don’t.

O’Leary: That’s a bit harsh Dom, what should their next move be?

O’Leary: Now, it’s time for our second contestant. It’s the President of Magdalen College Oxford and a 10-year-old photograph of her Majesty the Queen.

President: It’s all about the journey and it’s taken us a long time to get here, what with the train changes and the engineering works between Oxford and Manchester. But we are here now, don’t know why. The BBC said we should do this for the young people, all the graduate students of the middle common room, all 21 of them—well, the 10 who could be bothered to turn up to vote about a picture of the Queen.

President: We’ve made a lot of headlines and now we are ready to make some more. We are delighted to be working with Noel Gallagher on this. The alternative they offered us was the bloke who wrote The Wombles song.

O’Leary: Here with Her Majesty the Queen

Gallagher: Today is gonna be the day
That they’re gonna give her back to you
By now you should’ve somehow
Realised what you gotta do
I don’t believe that anybody
Votes the way you do about this now
Gavin’s tweet, the word is on the street
That the Queen on your wall is out
I’m sure you’ve voted for it before
And you never really had a doubt
I don’t believe that anybody
Feels the way you do about it now
And all the Rhodes we see are reminding
And all the votes that lead us there headlining
There are many things that I
Would like to say to you but you can’t say anything anymore
Because maybe
You’re gonna be the one that saves her
And after all
The Queen should be on your wall.

O’Leary: Another banger there from Noel. Let’s go to the judges. Tom, did the snowflakes melt in the heat of competition?

Jones: I’ve met her, you know, at the Royal Variety and when I got my knighthood at the palace. Looks nothing like her picture on the ten-pound note.

O’Leary: Amanda, were you moved?

Holden: No, I’ve been sitting here the whole time.

O’Leary: Dom, did that song help you see clearly?

Cummings: Are you taking the Mickey?

O’Leary: Seriously, what do you think?

Cummings: Far be it from me to crush anyone’s hopes and dreams.

O’Leary: Enough about Matt Hancock though, what about the song?

O’Leary: Thanks Dom, we seem to have lost your mic there. Now, it’s your turn to vote. The lines are now open. If you want to stop Rhodes from falling, text Oriel to the number on your screen. If you want to see her Majesty back on the wall, text Magdalen. Also, let us know your views by tweeting us @musicalstatues. Remember to keep your racist comments within the law. We’ll be back later tonight with our results show, Musical Statues: The Toppling. See you then, bye everyone.

Terms of use: this is a free email for fun on a Friday, it should be shared among friends like the leadership of the DUP. Want to vote for your favourite musical statue? Want to say hello? Email ivorytower@researchresearch.com