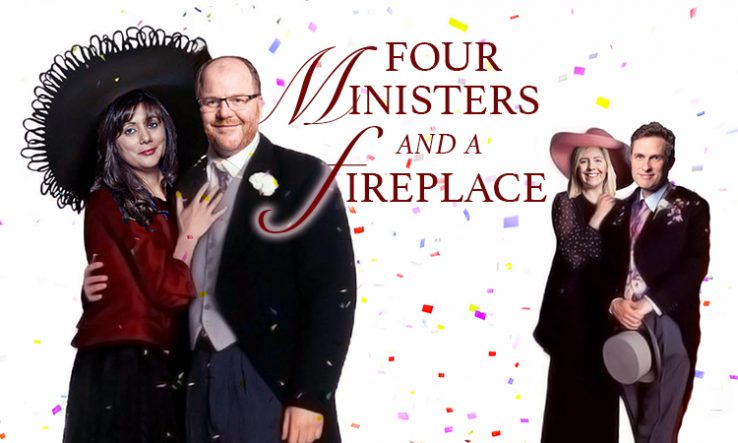 Requests the pleasure of your company at a reception

of the 1922 Committee to celebrate his appointment

as leader of the Conservative Party

A room in the Palace of Westminster

Jacob Rees-Mogg: He has my full backing.

Rees-Mogg: Best man for the job, no doubt about it.

Malthouse: I voted for him.

Rees-Mogg: We will not see his likes again.

Malthouse: We are talking about the same person, right?

Rees-Mogg: He was the greatest PM.

Malthouse: I’m not sure we are talking about the same person.

Malthouse: I thought he had 170 votes.

Malthouse: Yes, who were you talking about?

Rees-Mogg: Rishi Sunak, obviously, yes. Now is the time for party unity and I congratulate Master Sunak on his victory and will support his leadership.

Malthouse: Think he’ll keep us on?

Rees-Mogg: That’s why I congratulate Master Sunak on his victory and will support his leadership.

Rees-Mogg: It was very close in the end.

Freeman: Yes, the best contender nearly made it to 100 votes.

Rees-Mogg: There were 102 votes, actually.

Freeman: Are we talking about the same person?

Rees-Mogg: I congratulate Master Sunak on his victory and will support his leadership.

Freeman: Me too, always have done—he’ll make a great PM. Any idea when posts will be announced?

Malthouse: I had just finished unpacking my last box.

Rees-Mogg: I congratulate Master Sunak on his victory and will…

Freeman: Maybe, if people thought it was a good idea, and the post were available, and all things being equal, I might, maybe, possibly, return to be… you know…

Malthouse: What do you think of that,Jacob?

Rees-Mogg: I congratulate Master Sunak on his victory and will support his leadership.

Freeman: Oh, hello, Andrea. Isn’t it a great day for party unity? How are you?

Andrea Jenkyns: I’m fracking livid. Who does this guy think he is?

Malthouse: This is George Freeman, you’ve met before, no?

Malthouse: Are we talking about the same person?

Tequests the pleasure of your company at a reception

to celebrate her appointment as secretary of state for education

A room in the DfE

Gillian Keegan: Thank you all for coming. I know most of you have no say in the matter since your are civil servants who are paid to be here, but still it’s brave of you to turn up, after the whole Sue Gray thing. I was just speaking to the Permanent Secretary, who tells me this is the fifth reception you’ve had in four months for different secretaries of state. I think that’s more partying than went on in Downing St.

But let me reassure you that I plan to stick around longer than the last guy, who managed 49 days, or seven lettuces, as they now say. And still he wasn’t the shortest serving education secretary this year. However, I would like to pay tribute to my predecessor, Kit Malthouse, who will be remembered for all the amazing things he achieved… when deputy mayor of London.

Just wish he’d got rid of the empty boxes in the office. However, I want you all to know that I am committed to pushing forward this government’s agenda on education and look forward to… err… grammar schools, is that still a thing? And, of course, free speech in our universities, which have become like the Soviet Union, where leaders detached from reality tell us the sunny uplands are just around the corner… Or is that the Conservative Party? Hold on… I’ve got some notes here, that might help.

As the Roman philosopher Seneca once said: “Sometimes even to live is an act of courage.” Mmmh… I’m not sure that is helping. Anyway, I look forward to working with you all, well, most of you anyway. Obviously, there will be some natural churn. Those who are about to die, I salute you. Was that Seneca? So, I’d like you all to be upstanding and to raise your glasses of water—sorry that’s the whole Sue Gray thing again—to toast a new era of unity for the party… sorry, country.

Invites you to a personal meeting in 10 Downing Street

to discuss your future

Sunak: Do come in, George, it’s been too long, when did we last…

Freeman: Monday, at the reception in parliament, you said to swing by later in the week for a chat.

Sunak: Yes, thanks for persuading Penny to stand aside. It was the best thing.

Freeman: For the country.

Freeman: And for the party, obviously.

Sunak: Them as well.

Freeman: So, I guess you are now looking to appoint a new science minister.

Sunak: Well, thanks for dropping by, George. Thanks once again for the Penny thing.

Freeman: But… I just wondered whether there was anything else?

Sunak: Nope, don’t think so, if Robert Halfon is outside, could you show him in.

Freeman: Please, Rishi, come on. I’ve told everyone down the club that I was going to be a minister again. I’m a team player. I even went to the party conference in Birmingham when you were walking in the Dales.

Sunak: All right, let me see. I’ll check the spreadsheet… Climate minister, no that’s going. OK, how about science minister?

Freeman: But you said…

Sunak: Well, you can be the other science minister.

Sunak: You’re happy to share an office? Maybe we could put another desk in there. How about bunk desks, one on top of the other? That’s very science and future-y.

Freeman: Who decides who goes on the bottom?

Sunak: I’ll leave that to Grant Shapps, or whatever he’s calling himself this week.

Freeman: Pity he only lasted six days as home secretary.

Sunak: I’m sure his successor is going to last in the home office for a long time.

Freeman: Are we talking about the same person?

to brief you on departmental plans going forward

Keegan: Lovely to speak to you, Andrea. How is everything in… wherever it is you are.

Jenkyns: I’m in the office two doors down.

Keegan: Oh, I thought you’d be in the north, in Morley and Outlier.

Keegan: Sounds like a lovely part of the world.

Jenkyns: Yes, it is. Sadly, with all my duties as a minister, I don’t get to spend as much time there as I’d wish.

Keegan: Funny you should say that…

Jenkyns: Please don’t sack me. I could job share with Robert Halfon, like the science guys. Sack Gullis, he’s much worse than me. I know all the words to Rule Britannia…

Keegan: Don’t think of it as a sacking, more of a restructure, with your post making way for future development, going forward. We are taking a new direction.

Jenkyns: Frack you! Want to see what I think of Rishi Sunak and all the enemies of the people?

Keegan: Sorry, going to go through a tunnel, about to lose you… literally. Have your desk cleared by tonight. Bye. [Click]

An office in BEIS

Freeman: Thank you all for coming. I appreciate it is a bit of a squeeze in here, what with the bunk desks, but we thought that was the best way to do it. A real stroke of genius by the prime minister, whose leadership I fully support.

Ghani: Obviously, I’m on top. And as science minister, I’ll have oversight of everything George is doing, when he bothers to turn up in the office.

Freeman: To be honest, I don’t think she’ll be there for long. But as science minister, I’ll be providing ballast and solid foundation for all the kites Nus will be flying while she is up there in the clouds.

Ghani: And as science minister, I’ll be looking down on George’s efforts.

Freeman: And as science minister, I’ll make sure nothing trickles down…

Gavin Williamson: Hello, have I come to right place?

Freeman: So good to see a member of the cabinet, glad you could make it. I did invite the others, but maybe the traffic is bad tonight, or is there a football match or something. Are England playing?

Williamson: Invite? No, I’m just here in the role given to me by the prime minister.

Williamson: Yes, that too. He’s asked me to measure up all government offices.

Freeman: With a view to rationalising Whitehall?

Williamson: No, we are going to put fireplaces in them all. He’s not going to COP27, but wants to bring a warm glow to government, setting an example for the hearth of the nation. Look, I’ve got some catalogues here, perhaps you’d like to choose one. Space is at a premium, so maybe just a compact woodburner or a pot-belly stove.

Ghani: As science minister, I should decide on our energy needs.

Freeman: As science minister, I should…

Terms of use: this is a free email for fun on a Friday, it should be shared with colleagues like the job of minister of state for science. Want a free no obligation quote for a surplus stock wood burning stove? Want to say hello? Email ivorytower@researchresearch.com