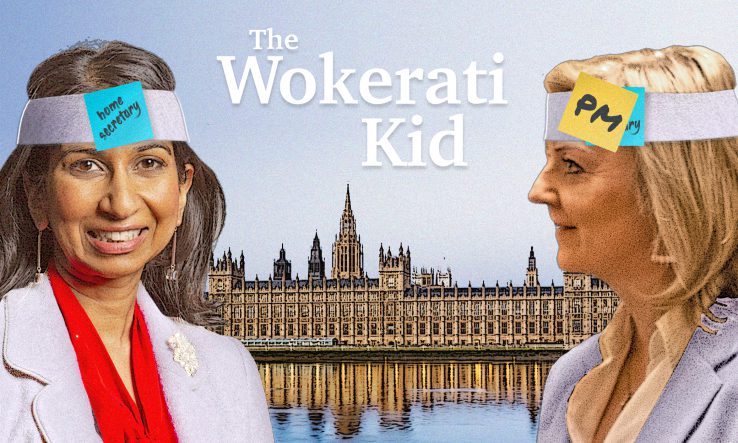 A meditation room in the Home Office.

Sensei: No, your breathing is too shallow. You must concentrate and channel the spirit of UKIP if you are to overcome your opponent.

Braverman: I am trying, sensei, but the training is too hard.

Sensei: Look at the wall, on the great faces of the past: Priti Patel, Theresa May, Michael Howard…David Blunkett. These people knew how to create a hostile environment.

Braverman: But what about Alan Johnson, Amber Rudd…?

Sensei: Blank these thoughts from your mind. Repeat your mantra.

Braverman: There are too many international students propping up low-quality courses, piggybacking visas with large families, sometimes six at a time.

Sensei: Good, now repeat it over and over again.

Braverman: But is it true, sensei?

Sensei: It matters not whether it is true—to become a master of the art of wokerati, you must above all convince others that it is true.

Braverman: Even if I don’t believe it myself?

Sensei: It is essential in wokerati that you say one thing and do another.

Braverman: That’s handy because I was actually an international student for two years in Paris. I was an Entente Cordiale fellow and on an Erasmus master’s programme at the Sorbonne.

Sensei: Never show your true self to your opponent. Wokerati is a passive-aggressive art—it should never be used for anything other than self-advancement. Now concentrate, repeat your mantra.

Braverman: There are too many international students propping up low-quality courses.

Sensei: Breathe deeper as you say it, as if in sorrow. As if you are speaking at a fringe meeting at the Conservative Party conference.

Barverman: There are too many international students propping up low-quality courses.

Sensei: Excellent, now you are ready to face your opponent.

Braverman: Yes, of course, her too.

After the House of Commons debate on the Public Order Bill.

Braverman: Did you see my performance, sensei? You don’t look happy.

Sensei: Your opponent humiliated you.

Braverman: But I did all my rehearsed moves: “It is the Labour Party, the Lib Dems, the coalition of chaos, the Guardian-reading, tofu-eating wokerati and, dare I say, the anti-growth coalition that we have to thank for the disruption we are seeing on our roads today.”

Sensei: And your opponent spun your words around, she made you look a fool. A true master of wokerati would never be so open. You must insinuate like a passive-aggressive ninja, then walk away and deny you implied anything. Look at the great exponents of wokerati like Donald Trump, Nigel Farage, Boris Johnson…

Braverman: But you told me to say one thing and do another.

Sensei: That is the essential skill of wokerati.

Braverman: Well, I did. You see, I’m a Buddhist and am in fact no stranger to tofu.

Sensei: You’re a Buddhist? Wow, they’ll let anyone in these days.

Braverman: When I was attorney general, they used to ask whether my personal beliefs meant I would not be able to do the job.

Braverman: The good news is it wasn’t my personal beliefs that meant I couldn’t do the job.

Sensei: Yes, you were as good an attorney general as you are a home secretary.

Braverman: Are you insinuating something?

Liz Truss: We can’t have you going around saying that there’s been a coup.

Braverman: Whatever happened to you, Liz? You used to believe in something.

Truss: Like you, I have studied the partial arts and know how to advance myself at the expense of all others.

Braverman: You have studied wokerati?

Truss: Remember when I claimed “the woke civil service” culture “strays into antisemitism”?

Braverman: Of course, that was genius. There is absolutely no evidence for it. It annoyed all the right people. It made headlines. You walked away denying you had said it even though it had been caught on camera. Truly, you are a master.

Truss: There’s more where that came from if it’s needed.

Braverman: Then join me, Liz—together we can put an end to the large families of international students landing in small boats to prop up low-quality courses.

Braverman: What has the truth got to do with wokerati? I thought you were strong, Liz, but now I see that you are weak. You are just another member of the anti-growth coalition.

Truss: Hold on, that’s my line. Recruiting international students is all about growth.

Braverman: Tomorrow, I will be announcing curbs on post-study work visas.

Braverman: Then I quit, and my departure will destroy you.

Truss: I doubt that. I’m a fighter, not a quitter.

Braverman: You’ll never have seen a resignation letter like it. We shall see, then, who the true passive-aggressive ninja is.

Thérèse Coffey: Wow, have you read this, Liz?

Truss: How bad can it be?

Coffey: As soon as she realised her mistake, she decided to do “the right thing” and resign.

Truss: She sent an email to someone? What is she talking about?

Coffey: That’s not the best bit. “The business of government relies on people accepting responsibility for their mistakes. Pretending we haven’t made mistakes, carrying on as if everyone can’t see that we have made them and hoping that things will magically come right is not serious politics. I have made a mistake; I accept responsibility: I resign.”

Truss: Ouch. Truly, she is a master of the passive-aggressive arts.

Truss: Are you alright, Thérèse? Is that a bruise on your hand?

Coffey: Got into a bit of a ruck in the division lobby last night with some reluctant backbenchers.

Coffey: It certainly was.

Truss: It’s all over, Thérèse. I see now that the partial arts are not about manhandling your opponent into a voting booth, but real strength comes from making passive-aggressive insinuations and walking away. That is the true way of wokerati.

Coffey: Who’s that at the door? It looks like Graham Brady.

Coffey: Guess I picked the wrong week to quit smoking.

Braverman: Now, sensei, do you see my victory? Thanks to you, I am the wokerati champion.

Sensei: Be careful what you wish for, Suella.

Braverman: With Liz out of the way, now I can be the only candidate of the right in a leadership election. Soon I will be prime minister.

Sensei: Not the only one.

Braverman: Not Kemi? Then who? [phone rings] Hello, who is this?

Voice: Salutations, Sue Ellen, it’s me, Bozza, just packing my bags in the Caribbean and heading to the airport. Can I count on your vote in the leadership election?

Voice: I’ll put you down as a maybe. Grant Shapps is keeping some sort of spreadsheet, even though he is very busy being home secretary.

Braverman: No, no, no…what have I done?

Terms of use: this is a free email for fun on a Friday. It should be shared with colleagues like a letter of no confidence six weeks into the job. Got a spare couple of weeks and want to give being prime minister a go? Want to say hello? Email ivorytower@researchresearch.com