Why did this tweet by Research Fortnight last month raise my hackles? I believe universities make a positive contribution to an area; I see it on every visit I make. And I want to see these areas succeed; I’m a son of Bradford and I live in the south of England—I have lived the chasm. I am also an avid supporter of a thriving higher education sector; it is a national asset that should be backed and stretched and harnessed.

My concern is for existing institutions—the ones that have had a challenging time over the past decade. I simply can’t see how new institutions in new locations won’t intensify recruitment issues for existing ones—those that already serve these communities and those that have capacity to support more prospective students. The government’s ambitions don’t seem to be data-led decisions about good use of public money.

The next decade will see increasing demand for higher education, with around 150,000 more undergraduate entrants a year expected by 2030. Proportional rises in postgraduate teaching places show potential increases of around 30 per cent over the same period, although demand for UK higher education will not be evenly spread across the country.

We have capacity for these increases in existing institutions. In 2015, lower-tariff universities recruited around 200,000 undergraduate students through Ucas. By 2021, this number had reduced to 170,000. This suggests that these institutions already have potentially 30,000 places per year available, let alone any appetite they may have to grow.

The data show that around 60 per cent of the sector has the capacity to recruit further—capacity that could be harnessed to support levelling up.

But to build capacity, the sector needs confidence. It needs greater levels of certainty on future income, on income per student and on the government’s appetite to get behind its plans. To date, this confidence has been lacking. That risks a sector that could recruit more home students but that is not confident enough to do so.

I decided to take a closer look at changes in demand in the three towns named by the levelling-up secretary—Doncaster, Wigan and Grimsby—and at patterns of recruitment by universities that have traditionally recruited from constituencies in these towns.

At dataHE, we look at populations by age and higher education entry rates for each parliamentary constituency in the country. The only recruitment pools that are growing are those of 18-year-old school leavers. The pools of people aged 19+ are shrinking. To keep figures on the optimistic side, I’ve just analysed the numbers of 18-year-old school leavers in each constituency in each of these towns, although the depletion of those in the 19+ age group will suppress the percentage change over the decade. 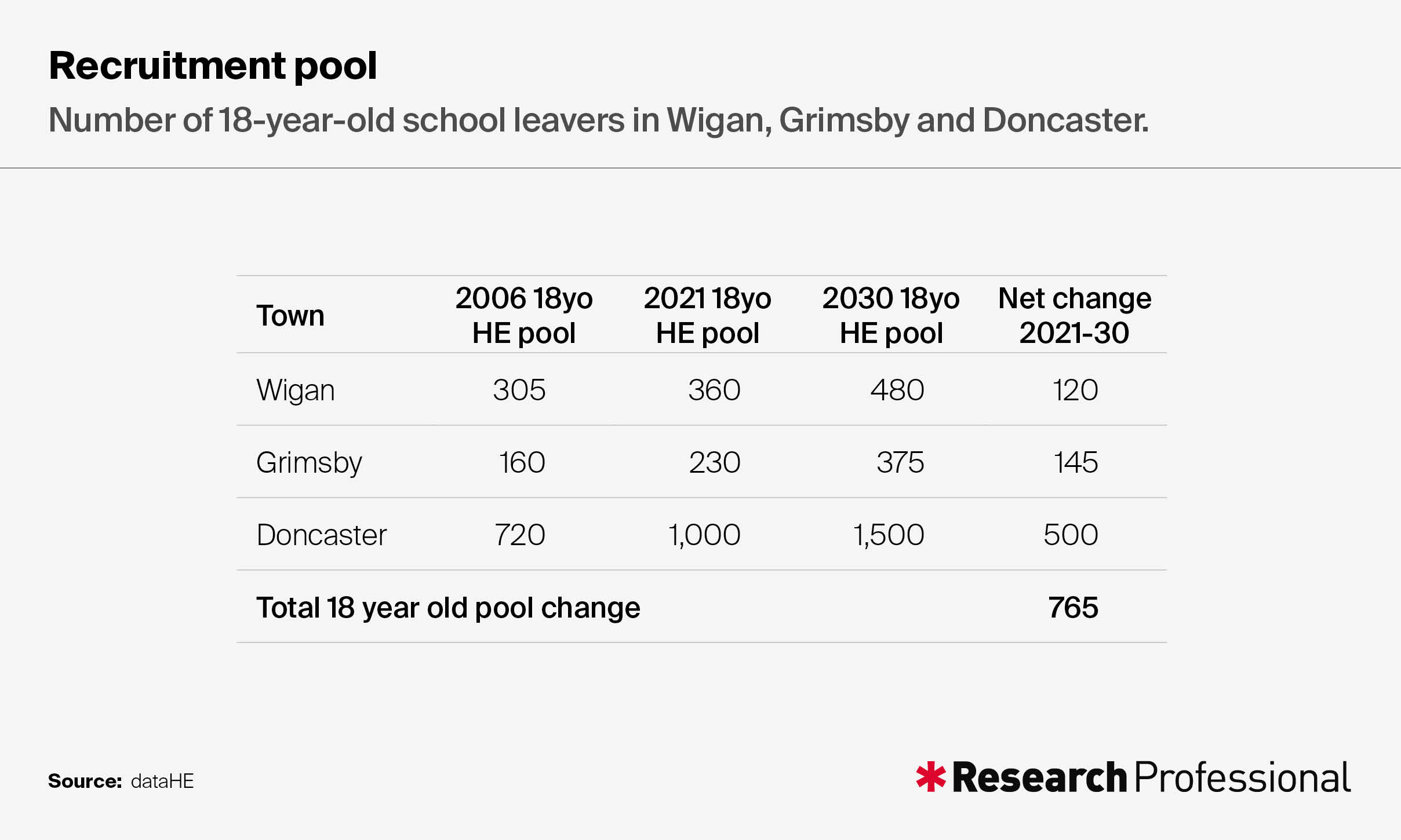 Even if we add in the retained pool of mature students, we’ll only be talking about an approximate 1,500 extra students across these towns by the end of the decade—and that is if the government allows higher education participation to continue on its current trajectory.

And what about supply? Of the universities with a large footprint in these towns, all provide signals in the data of capacity to recruit. 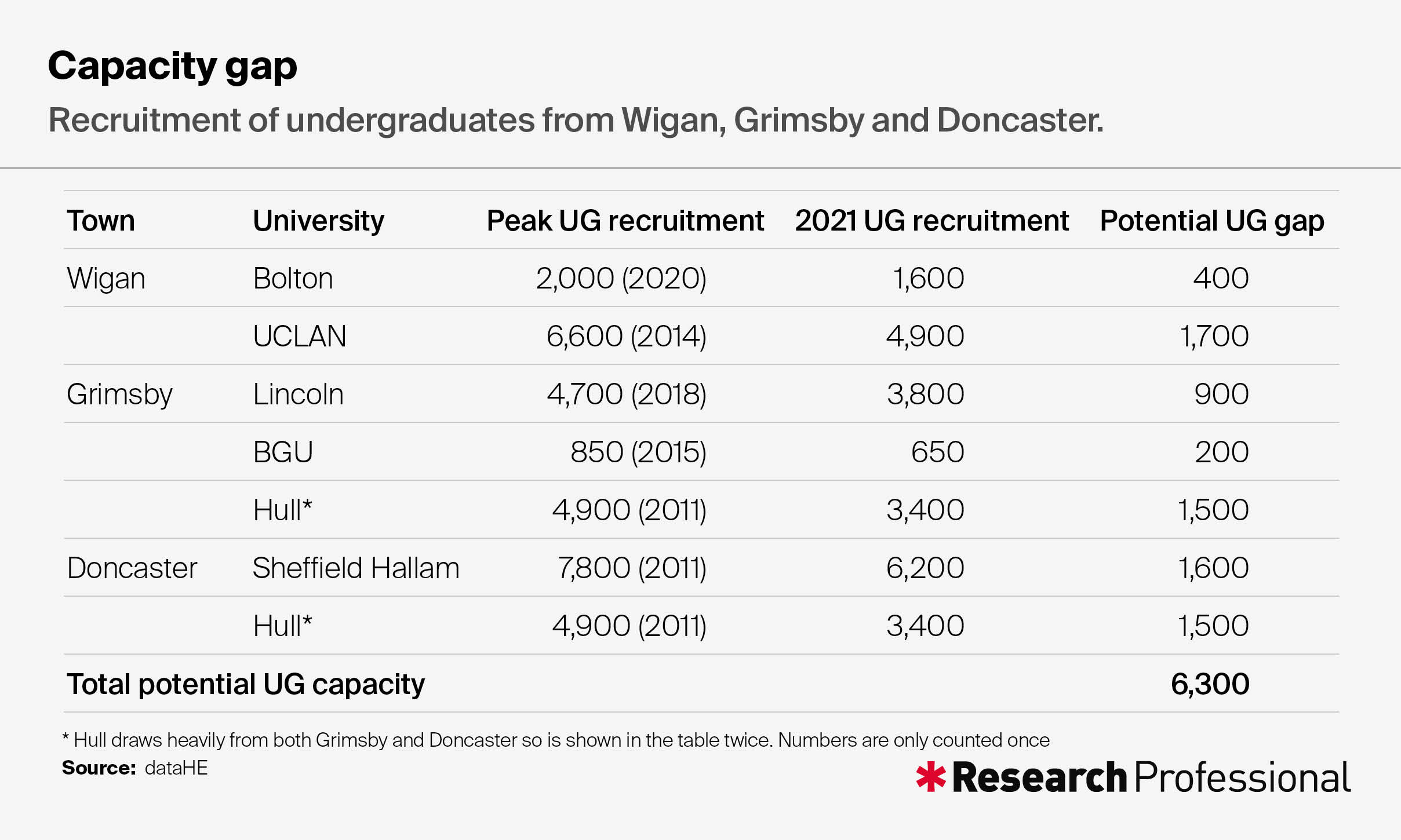 This list is not exhaustive; there are of course other universities not far from these named towns that are also keen to recruit: Bradford, Leeds Beckett, Leeds Trinity, Edge Hill, Liverpool John Moores, Liverpool Hope, Salford, York St John and Derby, to name a few.

But the capacity in universities in the immediate area already far outstrips demand. And demand in the towns on their own would not support an institution of any size. Any higher education leader there would be motivated to recruit from other postcodes in the local area, thus making the outlook for existing institutions even bleaker.

My final concern relates to what appears to be a policy conflict. Listening to signals from the Treasury and the Department for Education, it’s easy to discern worries in government about the cost of higher education and the size of the student loan book. Policymakers understand the scale of demand over the coming decade and what this potentially means for the public purse. Policy moves appear to be towards suppressing demand for and entry to higher education.

If my concerns here are correct and the government does want to suppress appetite for higher education participation, why build additional capacity?

If any new provider of capacity recruits successfully, it is likely to be to the detriment of other existing institutions. Does levelling up mean levelling down another city or town by depriving it of a thriving higher education provider? Is Sheffield a less worthy cause than Doncaster? Hull than Grimsby?

Could it be that levelling up in this way has nothing really to do with good use of public money, and more to do with marginal seats? I do hope not.

If there are to be any new universities or university centres, let’s please make sure they are collaborations between existing providers that can share in the success of levelling up while ensuring their current provision is able to thrive.

Andrew Hargreaves is co-founder and director of DataHE.