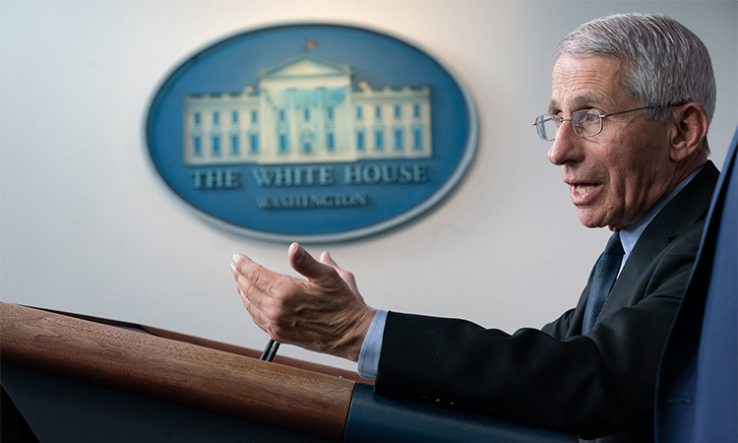 The United States government has given pharmaceutical companies unprecedented access to public research infrastructure as part of its assault on Covid-19, according to the country’s leading infectious disease expert Anthony Fauci.

“I don’t think we’ve ever seen it to this extent in the relationship between the industry and the federal government,” Fauci (pictured), one of President Donald Trump’s most important advisers on Covid-19, told an online session of the Biotechnology Innovation Organization convention on 9 June.

As director of the National Institute of Allergy and Infectious Diseases (NIAID) part of the vast US National Institutes of Health, Fauci built what he described as “probably the largest and most extensive” publicly funded network of clinical trial sites in response to the HIV epidemic in the 1980s.

“We are now utilising those clinical trial networks to allow companies to have the access to clinical trial sites that in fact were built by the NIH for the NIH,” he said.

This unprecedented level of cooperation between the government and industry is “something we should be proud of”, he said.

Working with pharmaceutical companies has been central to Fauci’s initial response to the outbreak of Covid-19 in China, he stressed. Within five days of the virus’s genome sequence being made public by Chinese researchers on 10 January, NIAID had begun a collaboration with the company Moderna for a vaccine candidate.

“Sixty two days later we were in a phase 1 clinical trial,” said Fauci. “There is no doubt that is the world indoor record—I’ve never seen anything go that fast.”

The US approach contrasts with some other international efforts to develop vaccines for Covid-19, in which universities and independent research institutes are playing a more significant role. In the UK, for example, a vaccine candidate developed by researchers at the University of Oxford is one of the front runners in terms of its progress through the development pipeline.

Fauci said that phase 3 trials of the Moderna vaccine candidate were likely to start in July, and that the US is partnering with a number of further companies to “de-risk” their involvement in manufacturing vaccines.

These funding deals include $1.2 billion for AstraZeneca, which is co-developing the University of Oxford vaccine, and $609 million for Janssen. “It is at risk because if a vaccine fails and you’ve made a couple of hundred million dollars-worth of doses, you’ve lost it,” Fauci said.