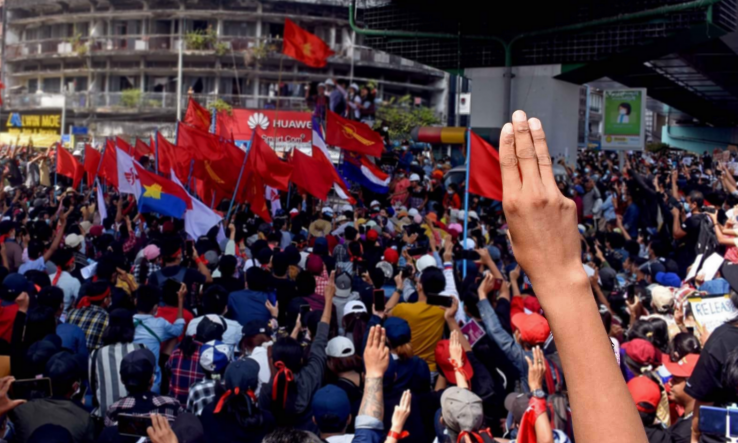 On 1 February, Jay awoke at 6:30 in the morning to the news that Myanmar’s military had overthrown the country’s elected leader, Aung San Suu Kyi.

Since then things have gone from bad to worse.

“People are taken away at night, or now even in day,” he told Research Professional News from the apartment in which he is hiding.

Jay leads a higher education institution in one of the country’s major cities. His real name, location and other details have been concealed in this article to protect his safety.

Before the coup, Jay led a life that would be familiar to many university heads. He worked with staff on curricula, oversaw plans for campus development, and mulled ways to increase international connections.

Along with colleagues in other organisations, he was also involved in the push to reform Myanmar’s higher education, as part of attempts to improve institutional autonomy and make academia more independent.

Since the coup, normal life for him—and for hundreds of other Burmese academics—has become impossible.

That morning, Jay says soldiers took a close friend of his in for questioning and told the man’s wife her partner would be back in a few hours. But, more than a month later, he has not reappeared and Jay says he has heard no word from him.

More people have been arrested and detained since then. According to the UN human rights office, more than 2,000 people are “arbitrarily detained”, while at least 149 people have died in protests.

Many others have disappeared, including several other friends and colleagues of Jay. Human rights group Amnesty International has reported “systematic and premeditated killings” of civilians.

Students and teachers have been at the forefront of the civil disobedience movement in response to the coup—as they have in the past, such as during a 1988 uprising that had its roots in student protests.

The military, always alert to threats to its power, has clamped down hard on universities.

“We educate young people to question authority and they seriously do not like that,” says Jay.

In an attempt to stop such questioning, he claims, the bodies of the disappeared are being left as warnings.

“They could just use a gun to kill…but they make sure the family members see the twisted bodies, and that’s how they instil fear and terror among the people.”

Research Professional News has not been able to verify this, but the UN human rights office said on 17 March that “at least five deaths in custody have occurred in recent weeks, with at least two victims’ bodies showing signs of severe physical abuse indicating that they were tortured”.

Six weeks after the first of his friends went missing, Jay said goodbye to his mother and went into hiding, not knowing when he would see her again.

Myanmar’s military—known as the Tatmadaw—had raided the local offices of groups including nonprofits and open-society organisations. Jay, who has worked with some of these groups, believed he was no longer safe at home.

Even before the coup, Jay was apparently on the radar of the authorities.

Just before the country’s now-militarily annulled election in November, his photo appeared alongside others in a social media smear campaign. The campaign, linked to supporters of the military, targeted civic leaders and academics.

He laughs as he recalls various absurd claims made about him. But he soon stops, pointing to a different picture among the smeared individuals.

“That’s my close friend who went missing on 1 February,” he says. “We still haven’t heard from him.”

Their fates are unknown, but Jay expects the worst.

As protests swelled in the streets and the military began to fire live rounds, killing civilians, Jay spent his days scouring Facebook for news about the coup and peoples’ reactions to it. The social media site has become an important source of information for many in Myanmar, where it is included in mobile data packages and accessible even in rural areas.

Regular classes at his institution ground to a halt, but Jay says his days were long and draining, with the relentless trawl for new developments punctuated by long stretches of internet blackouts.

Then, a few weeks after the coup, a close relative of Jay’s died from Covid-19. Jay says he felt he had to hide news of the death from other family members, who were themselves in hospital recovering from the virus.

This month, while attending a “yet le”—the Buddhist funeral rite where monks come into the home—he received a message from a colleague. One of his students had been arrested.

He learned that after being rounded up with other protesters, the student was taken to a notorious prison.

Jay says he wants to help but fears intervening could make matters worse. His involvement in higher education reform—and his link to the outside world—have made him a target for the military, he believes.

As the military crackdown escalated, Jay says he fought to balance growing pressure to issue statements attacking the coup on behalf of the university with the need to avoid attention and possible attack.

While he acknowledges that some alumni have wanted him to be more vocal, he says doing so could have put more people in danger.

But his efforts to strike a careful balance failed, and he has found himself accused both of being a puppet to foreign powers and an accomplice to Suu Kyi and her party, the National League for Democracy.

He laughs at the irony of his position: “We were accused of being supporters of the NLD in this crazy conspiracy and by the public of supporting the military.”

Even now he is speaking out, he’s sceptical about what this might achieve.

“If appeals by the United Nations do nothing to stop the violence, then why should anything I say stop it,” he says.

Although it has not been possible to verify some details of Jay’s story from outside the country, several of his colleagues—senior academics at institutions in the US and Europe who have known Jay for years—corroborated aspects of his story and expressed concerns for his safety.

Education has played a central role in protests in the country, but Jay hopes that in the future it can get back on the path to reform it was on before.

For nearly a decade, foreign educational institutions and nonprofit groups have assisted in drafting a plan due to be implemented in 16 of Myanmar’s leading universities.

This was meant to spur reform in the country’s 164 public universities—which are highly centralised and reliant on decades-old textbooks—and 40-odd private institutions, many of which are still not recognised by the government.

But the military coup has dashed hopes of greater autonomy for the country’s universities.

Jay thinks things may not get better any time soon. But he asks that the outside world does not forget him and his colleagues.

He hopes they will keep working with colleagues in Myanmar’s universities, come what may. They should even study effects of the regime, grim though this may be, he says.

“The international academic community should not and cannot sever ties with academics in Myanmar,” he says. “The only light of hope that we have for the long run is education.”