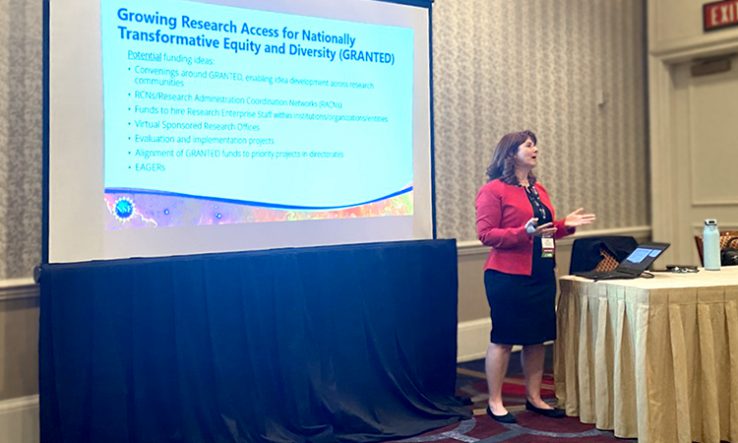 The National Science Foundation in the United States plans to target research administrators with a new and unusual $50 million scheme.

Funding for the scheme was requested as part of president Joe Biden’s proposed $205 billion federal R&D budget for the 2023 financial year. Speaking at the Society of Research Administrators International annual conference in Las Vegas, an NSF office head revealed more details about the scheme, including that funding could enable research institutions to hire staff.

During a talk on 3 November, Alicia Knoedler (pictured), who is in charge of the programme, said she wanted research administrators to serve as principal investigators on the grants.

“I would love to see research administrators be PIs on these grants. [You] spend all this time helping other people write proposals; write your own,” Knoedler said. “This is not traditional NSF.”

While the specifics of the scheme—called NSF Granted—have not been finalised, Knoedler said it has been developed to address nationwide issues in the research administration workforce, such as people leaving the profession.

According to Knoedler, the plan is for the scheme to be started by the NSF and for other federal funding agencies to then join, making it much bigger than the initial $50 million.

Knoedler revealed that she already has a “teeny tiny” pot of money that she could use to award grants through the scheme “soon”.

Other potential funding ideas for the scheme, she said, include holding “convenings” such as conferences and workshops for research administrators.

Knoedler also revealed to conference delegates that NSF is “trying to fix” the gender categories it uses to collect data on grantees. When collecting data, the NSF currently provides only three gender categories: male, female and do not wish to provide.