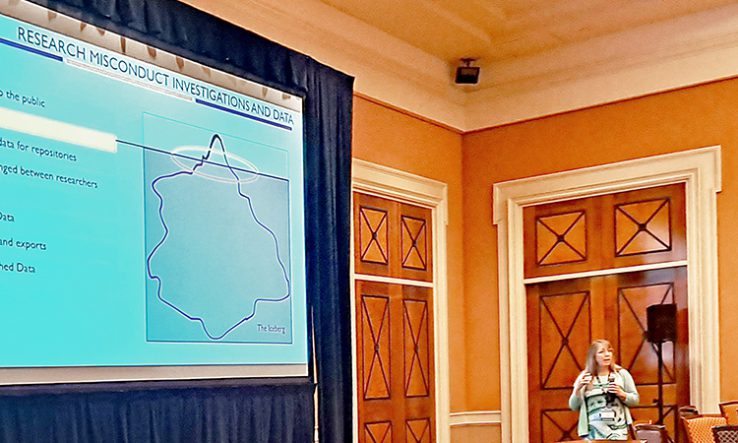 Publicly available data is only the ‘tip of the iceberg’ of what might need to be examined when an institution is investigating concerns about research conduct, according to a specialist in ‘research data forensics’—the practices used to find other relevant data for analysis.

This data will need to be sequestered by investigators using a thorough process for analysis alongside public data such as published research papers, Walsh (pictured) explained at the SRAI meeting in Las Vegas on 3 November.

Non-public data would ideally include raw data such as image files from a laboratory, as well as metadata like notebooks, Walsh said.

Obtaining and analysing such data will often take place in an iterative way, she said. Investigators will need to decide on the scope of the non-public data they should try to sequester, and this process should be specific to the allegations made.

It is “incredibly important” to document how data are obtained to protect their provenance, said Walsh.

Such investigations could be carried out by the research integrity office of large institutions like Harvard, she said, but also sometimes by research misconduct panels, which may lack forensics experience but be able to bring subject-matter expertise to bear.

Speaking at another session at the conference, Carly Pigg, a coordinator of grants and development at LSU Health Sciences Center in New Orleans, described how she and colleagues developed a data-ownership policy for the centre’s school of nursing on request from the dean of research, who was worried that faculty lacked an understanding of their data-management responsibilities.

Faculty “really had no clue” about their responsibilities towards their data before the policy was developed, Pigg said.

Developing the eight-page policy took about a year, which was much longer than the team expected when they began examining policies in place across the broader institution and elsewhere, she said.

Now that the policy is in place, Pigg said it will need to evolve to keep pace with updates to federal guidelines and will require extensive training of faculty to ensure that they comply.