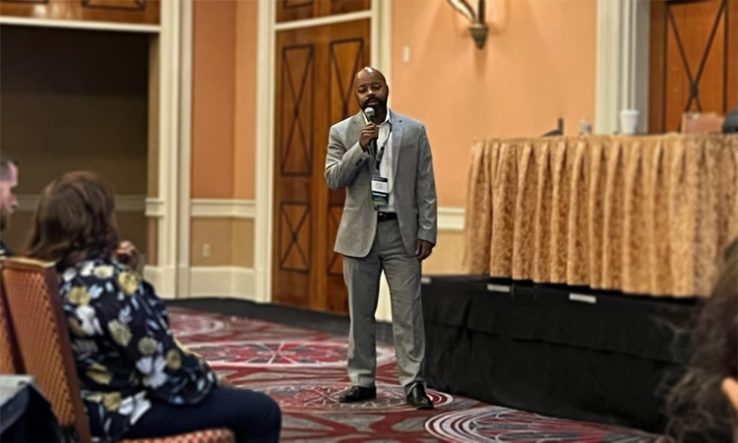 Research managers should use their position to advocate for employees from underrepresented groups and make them feel more engaged in the workplace, the Society of Research Administrators International has heard.

Marchon Jackson (pictured), assistant vice-president of sponsored programmes accounting and compliance at the University of Maryland’s division of research, said at the SRAI annual conference in Las Vegas that there were several things those in leadership positions could do to support those who may traditionally not speak up or who are part of minority groups.

Speaking at a session on inclusive leadership on 3 November, Jackson, who is a member of SRAI’s task force for diversity, engagement and inclusion, urged research administrators in leadership positions to “promote and advocate for policies that allow others to come into this space”.

For instance, he said, the chance to attend conferences such as the SRAI annual meeting was often “highly political in a lot of schools”.

“But if you can advocate, try and make it equitable, so that everybody can come. Because everybody needs to be able to attend a session like this.”

Doing so “drives engagement in your team and people won’t want to leave and will be more willing to go the extra mile”, he explained.

The power to change

Research managers should understand that they have the power to make changes in their institutions, Jackson added.

“If feels like we are in a sea of rules, policies, all kinds of directors from provosts to presidents. But you do have some control over this sphere you have been delegated to manage. So don’t waste it.

“What you’ll see is there will be more engagement, because people will know that you are going to bat for your team and you’re making changes that will make things more fair and equitable within your group.”

Administrators should not be afraid to speak up when they feel something is inappropriate or there is a performance issue, he continued.

“That way, you can stop the issue that is preventing the employee from feeling engaged.”

Where possible, he said, research managers should become a voice for underrepresented groups and provide a platform to allow them to engage.

For example, he said, “When you have a meeting, think about the people on your team who have not spoken up and…how you can pull them into the discussion.”