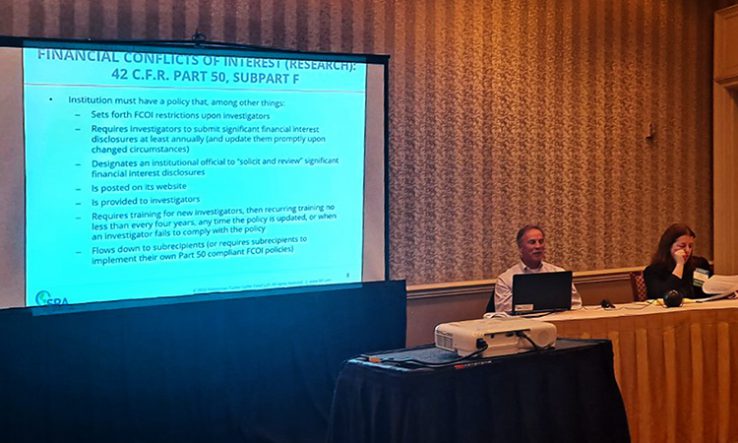 The US government’s attention to potential foreign influence on researchers in the country has reduced under president Joe Biden but remains an important issue for university administrators, experts have warned.

“The Biden administration hasn’t been as aggressive [as that of predecessor Donald Trump], but it’s not like these issues are going away,” according to Edward Waters, a lawyer with the law firm Feldesman Tucker Leifer Fidell.

Under Trump, the US Department of Justice cracked down on US-based researchers failing to disclose ties to foreign countries, in particular China. Several researchers were charged, but the government was accused by many of unfairly targeting Chinese-American researchers.

Speaking in a session at the annual conference of the Society of Research Administrators International in Las Vegas on 3 November, Waters (pictured left) said that conflict of interest concerns, including potential foreign influence, has become “a big, big subject” for research in recent years.

He and colleague Mindy Pava (pictured right), who advise universities on such issues, warned that the government and federal research funding agencies could consider ‘foreign influence’ to be something as innocuous as a researcher analysing data while travelling abroad. This is a “grey area” that could depend on factors such as the amount of time spent abroad and the level of instruction provided to subordinates while travelling, Pava said.

Different federal agencies, such as the National Institutes of Health and branches of government including the departments of defence and energy, “do things differently, even though they’re not supposed to”, said Waters.

In addition, administrations and agencies “keep changing the rules”, which is “a little bit frustrating”, he complained.

There is no “secret sauce” to avoiding such issues, Waters advised, but said it was a “smart move” to seek advice from funding agencies and ensure that any guidance they provide is supplied in writing when there are concerns about potential conflicts of interest.

“We can’t look inside people’s brains” in assessing researcher’s motives and influences, lamented Pava, meaning that there is a need for institutions to try to avoid being in a position where their researchers could be judged on grey areas such as what constitutes ‘significant’ foreign support.

“Conflicts aren’t bad; not knowing about them is bad,” concluded Waters.