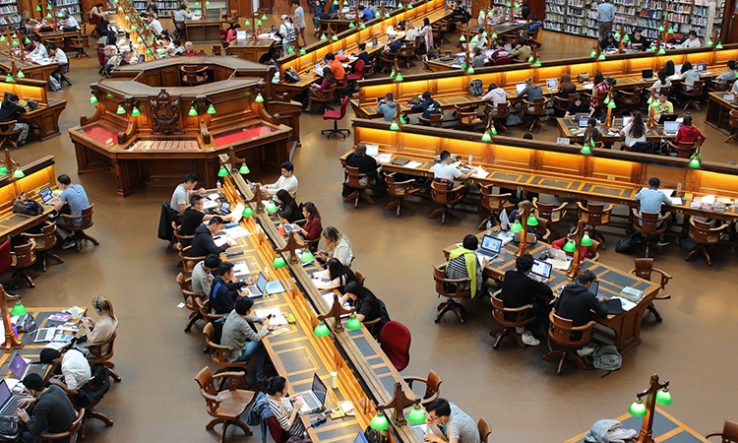 French universities preparing for la rentrée, the annual return to study after the August holiday, have warned they are facing budget cuts caused by the ongoing coronavirus pandemic.

After teaching exclusively online for six months, French universities will open in mid-September to a new world of masks, reduced student numbers and partial distance learning. This will come at a cost, said the Conference of University Presidents (CPU), which has estimated that health and safety measures will eat up 2-3 per cent of university budgets.

The CPU, however, highlighted that “universities are ready” to aid in France’s economic recovery, saying they are “central players because of the research carried out there”.

Students will be taught using a hybrid online and face-to-face model. However, minister for higher education and research Frédérique Vidal has signalled the intention for as many students as possible to attend in-person classes.

Staff and students will be required to mask up. Speaking on 27 August, the prime minister, Jean Castex, said that “in higher education, masks will be mandatory for everyone” when the academic year begins.

This superseded a ministry of higher education circular issued on 6 August, which stated that masks would be “strongly recommended”.

Social distancing measures will include every other seat being left unoccupied in lecture theatres, while Covid-19 tests will be performed on campus. This could result in delays of classes, and could mean lecturers will have to teach some classes twice, at significant extra cost.

Speaking at a press conference on 1 September, Guillaume Gellé, president of the University of Reims Champagne-Ardenne, estimated that the university faced around €3 million in extra costs to address the pandemic.

Hervé Cristofol and Chantal Pacteau, spokespeople for the SNCS-FSU union, noted that while universities may have been closed to students, research continued throughout the Covid-19 pandemic.

“As members of higher education and research, we never ceased our activities during the pandemic, and sometimes worked more intensely and urgently than ever, and in ways rarely practiced in most of our professions,” they wrote in a union bulletin.

Despite the extra pressure on budgets, student numbers will rise: the ministry of higher education and research announced 30,000 new university places would be created between 2020 and 2022.

Education minister Vidal acknowledged these plans in an interview published in the newspaper Le Figaro. The bulk of the places will be in medical studies and paramedic subjects, as well as digital and sustainable development sectors.

Vidal said these fields were “under strain” and had taken on [new] meaning in view of the pandemic.

The budgetary pressure comes against a backdrop of ongoing strife between the government and academics, who remain concerned about reform plans, including the multi-annual research planning bill (LPPR), which would reform pensions and employment practices.

Higher education union SNESUP-FSU said French academia was “cracking”. The union criticised Vidal’s decision to move ahead with the LPPR in the face of a “health crisis [that] adds organisational constraints” to universities that had already struggled with low investments over several years.

“The minister tells us the institutions are ready to welcome the students,” the union said. “We can only invite her to go there to meet colleagues and appreciate the disorder and cacophony that reigns in the institutions at the moment.”