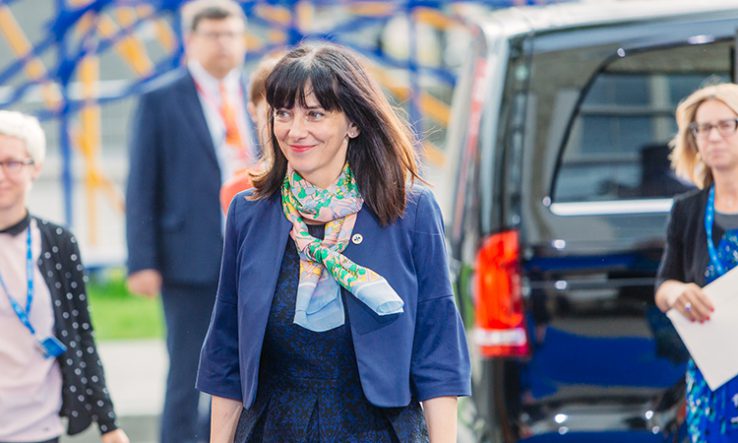 Mariya Gabriel, the EU R&D and education commissioner, and Blaženka Divjak (pictured), minister of science and education for current EU presidency host Croatia, have come together in their concern over the R&D troubles that are plaguing eastern and southern Europe.

The two politicians, whose roles will make them the most powerful shapers of EU R&D policy until the presidency changes hands at the end of June, discussed researcher mobility at a meeting this week, Gabriel indicated on social media.

Gabriel thanked Divjak on Twitter on 10 January for what she described as a “constructive discussion” on the priorities of the Croatian presidency. She said that “improving brain circulation” is important for the future of the European Research Area—the package of policies intended to improve the flow of knowledge and researchers.

One priority of the Croatian presidency is the “balanced mobility of scientists and researchers”. The presidency has promised to “initiate a debate on ‘brain circulation’ as an alternative to ‘brain drain’, and on the positive model of mobility of scientists and researchers that contributes to expanding knowledge throughout Europe, and attracting talent from all over the world”.

Both Divjak and Gabriel raised the issue of brain drain and other R&D problems for eastern and central European countries in media appearances this week.

In a press conference on 9 January, Divjak said the EU must learn “how to really support freedom of movement but at the same time… not to have some countries where we don’t have potential for innovation or growth”, according to the news website EurActiv.

Divjak also reportedly said EU R&D funding must be allocated more evenly in future, complaining about an “old men’s club that we sometimes witness in some projects when we are competing for EU money”.

According to an August 2018 European Commission report, only 4.8 per cent of funding from the EU’s 2014-20 R&D programme was won by the EU’s newer 13 member states—which are generally in the east—in the first 4.5 years of the programme.

“Imagine how these figures are accepted in these member states,” Gabriel reportedly said in an interview with the news website Science Business, published on 9 January.

As one way to reduce the disparities between member states, she said she wants to introduce equal pay for all researchers who win funding from the EU’s Marie Skłowdowska-Curie R&D funding scheme.

She also flagged a “hop-on” proposal that would let researchers from poorer EU member states get funding to join collaborative research projects. None of these measures would come at the expense of funding excellence in research, she said.

In addition, Gabriel said that the Western Balkans are a particular priority for her in terms of collaboration with non-EU countries. “They have a real potential,” she said.