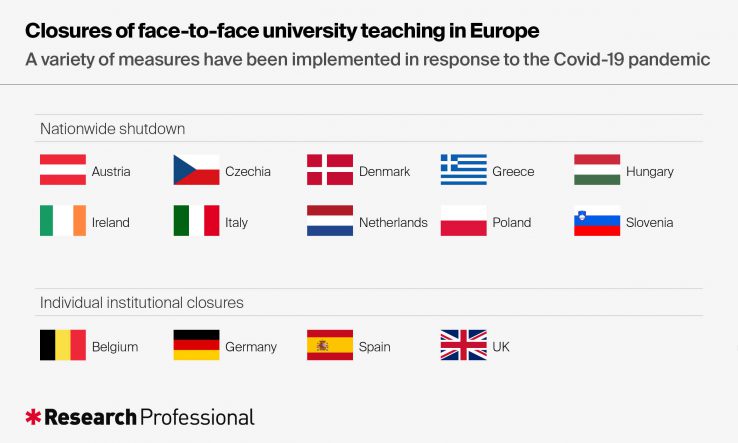 France, Portugal and Slovenia have joined a growing list of countries that have suspended face-to-face teaching in universities in an attempt to slow the spread of the Covid-19 pandemic.

“The world has faced an exceptional situation in recent months, which is new to us in contemporary times and which poses immense challenges,” Portugal’s prime minister António Costa said on 12 March. His decision took effect on 13 March and will be reassessed on 9 April.

The French and Slovenian governments announced the same day that their universities would close face-to-face teaching from 16 March.

Other European countries that have already announced similar bans include Austria, the Czech Republic, Denmark, Greece, Hungary, Italy, Ireland and Poland. The bans are generally being put in place initially until the end of March or the first week of April.

Individual institutions in Belgium, Spain and the UK have adopted similar measures of their own volition, in the absence of national bans.

Education ministers from across the EU discussed the effects of the pandemic via videoconference on 12 March. According to the Croatian presidency of the Council of the EU, they “agreed that they all want the same: to ensure the safety of our pupils, students and staff and to secure the continuation of learning without major educational disruptions”.

Ministers “discussed the available possibilities in terms of offering online classes and virtual cooperation”, the presidency said. “They exchanged information and experiences regarding support and guidance provided to education and training institutions, staff and families.”

The Council announced the same day that it would cancel or postpone “non-essential or non-urgent” ministerial meetings, replacing some of them with videoconferences.

In addition, the European Commission announced that, as of 16 March, all staff “in non-critical functions” would begin working remotely, while meetings with external visitors would be held by videoconference or postponed if possible, or with participants being registered otherwise.

Research Professional News asked whether this would affect planning for EU programmes due to start in 2021, but the Commission declined to comment.

EU and UK negotiators decided not to hold negotiations on the future relationship between the two as planned in the week commencing 16 March. “Both sides are currently exploring alternative ways to continue discussions, including if possible the use of video conferences,” the Commission said.

On 13 March the Commission proposed further measures to help EU member states deal with the economic consequences of the pandemic.

Meanwhile, a spokesperson for the European Research Council said that evaluation panels taking place next week would be done “fully remotely with a teleconferencing solution”.