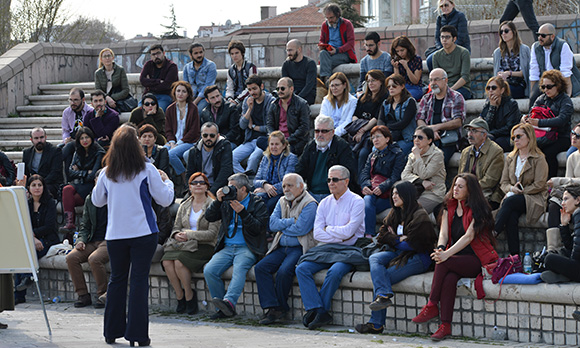 In Turkey, life is difficult for both dismissed researchers and those still in universities, say Klas Borell and his colleagues.

Attacks on academic freedom—the freedom of individual scholars to pursue research and the institutional autonomy of universities—are a central pillar of the contemporary drift toward authoritarianism. The situation in Turkey is especially severe.

In January 2016, 1,128 Turkish academics joined together to sign a petition titled ‘We will not be party to this crime’, protesting against state violence towards the Kurdish population. This provoked a harsh response from the government, which intensified after the failed coup of July 2016.

As of May this year, 700 signatories to the peace petition have been tried or are awaiting trial on terrorism-related charges. Some have been sent to prison.

Alongside attacks on individual researchers, the strengthening of state control over higher education and research has undermined university autonomy.

Since 2016, for example, university faculty no longer nominate rector candidates. The process is instead in the hands of the Turkish Higher Education Boards. Unsurprisingly, their appointees have played an active role in disciplinary measures against dissident academics.

In 2017, we interviewed 28 Turkish social scientists. Thirteen had signed the peace petition in 2016 and had subsequently been dismissed, while 15 were still working at various Turkish universities but lived in fear they might be dismissed. A study based on these interviews has just been published.

Academics under the threat of dismissal emphasised the difficulty of conducting research, with diminishing opportunities for international exchange and to obtain grants for projects deemed politically sensitive.

More significant still, they described an evolving academic culture characterised by self-censorship in writing and in interactions with students and colleagues. One dismissed academic said some students had taken to monitoring and informing on teachers: “A student asks a question during a lecture. You answer it, but the question turns into a trap for the teacher…As a result, teachers have started being more careful about what they say.”

As well as losing their positions, dismissed researchers face a lifetime ban on civil service employment. They also struggle to find work in the private sector, due to what seems to be a systematic system of exclusion.

One interviewee, for example, told us about four dismissed academics who opened a meatball shop but had to close it in the face of daily fines and harassment by the municipal government.

There is a stark and surprising contrast between the attitudes of dismissed researchers and those researchers still working in universities. While those living with the threat of dismissal were often resigned and despondent, many of the dismissed expressed a defiant sense of newfound freedom, of no longer needing to avoid sensitive issues.

One researcher told us she was glad to have lost her job. “The campus has a tense atmosphere,” she said. “It was psychologically difficult to teach. It was torture to work in that environment.”

At the end of 2016, several dismissed academics established Street Academies (pictured above) as a way to reach out to university students and the general public. In a follow-up study of the Street Academy in Ankara, we found that this alternative academy has given dismissed academics an opportunity to continue lecturing outside the formal institutions and maintain a social presence.

However, despite initial success and a sense of exhilaration among dismissed scholars, the Street Academy movement remains precarious. Dismissed academics face concerns for their security and a dire social and financial predicament, described as ‘civil death’ by many we interviewed.

The future of academic freedom in Turkey is uncertain. Some of the dismissed saw emigration as the only option. Others hoped to eventually return to their careers.

As academic freedom depends on a plural, democratic society, the future of Turkish academics will be closely linked to that of the increasingly authoritarian Turkish regime. One thing is clear: the violation of academic freedom in Turkey deserves serious attention from the international scholarly community.