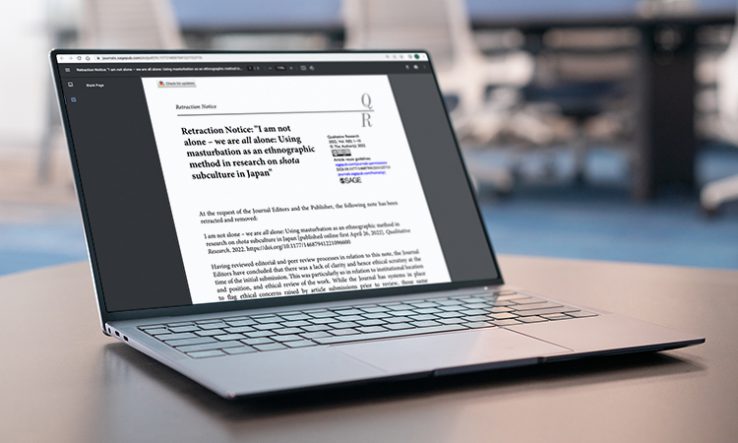 Shota refers to comics and illustrations that, as the study described it, “feature young boy characters in a cute or, most often, sexually explicit way”.

Following the publication, Sage Publishing and the University of Manchester launched investigations into the study, as several academics and public figures criticised the procedures that allowed it to be conducted and published in a peer-reviewed journal.

Sage removed the full article from the journal just over a week ago, while it was investigating.

“Having reviewed editorial and peer review processes in relation to this note, the journal editors have concluded that there was a lack of clarity and hence ethical scrutiny at the time of the initial submission,” the journal said.

Although it says the journal had systems in place to flag ethical concerns raised by article submissions prior to review, it added that “those same systems do not fully extend to note submissions”.

Journal guidelines say that what it calls “notes” is a “format for short, engaging and imaginative submissions”.

“It offers a more playful space for critical reflection on the craft of qualitative research,” the guidelines say. “Authors are encouraged to experiment with styles of writing, and submissions can take the form of stories, anecdotes, or lessons that impart original methodological insights.”

The retraction notice also claims that the two peer reviewers who considered the article did not raise ethical concerns in relation to the method and material in their reviews.

Sage goes on to say that the study was carried out “as a piece of independent research…without institutional ethical oversight”.

“The author stated that they followed professional ethical guidelines for their discipline, including the primary injunction to ‘do no harm’,” the journal said.

The journal added that the editors were “mindful of arguments that moral offense generated by the publication of the note provides problematic grounds for the censoring of scholarship”.

“However,” it added, “the editorial team recognises the argument that the note legitimizes sexual activity involving sexually graphic illustrated images of children and young people, both as an activity in itself and as a research method. Such arguments make the note highly problematic due to the potential to cause significant harm.”

The journal editors and the publisher apologised to readers who were negatively impacted by the publication of the work.

Research Professional News has approached Sage Publishing, the University of Manchester and Andersson for comment.

Commenting on its investigation into the case, Manchester said in a statement on 22 August: “The described research methodology and data collection were not submitted for University of Manchester research ethics approval. The production of the paper was not part of his [Andersson’s] supervised PhD programme of study.

“However, there are wider questions for the University which we continue to investigate,” they added. “As a precautionary measure, the student has been suspended pending the outcome of a full investigation under the Student Conduct Discipline regulation.”