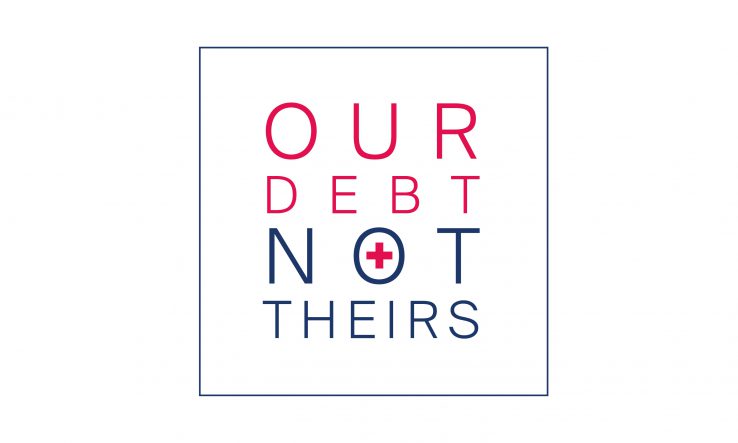 It was on 26 March that our higher education correspondent, Fiona McIntyre, first asked the government for clarity on whether final-year nursing students in England would continue to pay tuition fees while they worked on coronavirus wards.

It seems a relatively straightforward question. After all, why should trainee nurses incur the debt for a full year’s tuition when they have spent part of that time on the front line of the UK’s battle against Covid-19? They should not. To rub salt in the wound, the majority of this year’s graduating class were the first to pay £9,250 a year.

Today, Research Professional News launches “Our Debt, Not Theirs”—a campaign that calls for action from the government on two fronts. First, we want an immediate guarantee that student nurses in England who have joined the NHS to support its fight against Covid-19 will not be liable for tuition fees while they are working.

Once that assurance is in place, we want the government to take steps to reimburse tuition fees or forgive tuition fee debt for all current nursing, midwifery and allied healthcare students—as requested by Unison, the National Union of Students, the Royal College of Midwives and the Royal College of Nursing—in recognition of the vital role these students are playing and will continue to play in supporting the health service at such a critical time.

Eva Crossan Jory, vice-president for welfare at the NUS, told us that the contribution of nursing, midwifery and allied healthcare students to our society had “always been immense but for too long it has not been adequately recognised”.

“The very cohorts of healthcare students currently experiencing unparalleled disruption to their education and volunteering to work on the front line against coronavirus are those who were also forced by the government to pay tuition fees and study without an NHS bursary,” she says. “We urge the government to commit to a radical new financial settlement for these students and all those to come.”

Students’ commitment to serving the NHS has sometimes ended tragically. In April, it was confirmed that Ade Raymond—a first-year mental health nursing student at Middlesex University—was among a number of healthcare professionals to have died from the coronavirus. He had been working for Barnet, Enfield and Haringey Mental Health Trust as a healthcare assistant.

We believe that the risk being taken by thousands of students—most from a generation that sections of the tabloid press delight in dismissing as ‘snowflakes’—means that they deserve more than a clap, more than a medal. They deserve to be free of a working lifetime of debt. It is Our Debt, Not Theirs.

Pledging his support to our campaign, Daniel Zeichner, MP for Cambridge and chair of the All-Party Parliamentary Group for Universities, said: “The government is happy to praise health staff and care workers but, as we saw again at Prime Minister’s Questions, is not prepared to put its money where its mouth is. Student nurses are too often thrown into the front line—they should not be paying fees, particularly in these most difficult times.”

At Prime Minister’s Questions yesterday, prime minister Boris Johnson indicated that the government was not prepared to waive the NHS surcharge—which is paid by immigrants to access the health service—for overseas nurses looking to work in the UK. Like the ones who saved his life.

Emma Hardy, Labour’s shadow minister for further and higher education, told Playbook: “Labour is opposed to tuition fees. Nothing makes the case that we all benefit from educational opportunity [better] than the brilliant work of scientists, nurses and so many others in the fight against coronavirus.”

“The government really must ask themselves whether it is appropriate to ask students to pay tuition fees as a price of working to save lives during the coronavirus crisis,” she added. Her thoughts were echoed by shadow science minister Chi Onwurah.

Jo Grady, general secretary of the University and College Union, said that nursing and healthcare students had “really stepped up to the plate on the Covid front line, and this campaign is right to point out how wrong it would be to saddle them with decades of debt that they would still be paying off long after this pandemic is over”.

While we are launching our campaign today, Research Professional News readers will know that we have been calling for assurances on this matter for weeks. After we first raised the issue with the government in late March, we have since repeatedly asked the following question to the Department for Education: Are nursing students who are working on the front line ahead of graduation expected to carry a full year’s worth of tuition fee debt with them when they conclude their studies?

We asked it on 7 April, when Health Education England promised that final-year students who joined the NHS early “would be allowed to continue their studies once this is over” and would not “suffer financially” because of the pandemic. Surely the government should then have confirmed a fee debt waiver?

We asked again on 29 April when education secretary Gavin Williamson swerved a question on the issue from Robert Halfon, chair of the House of Commons education committee. As we write on our website today, it was specifically because of his conversations with Research Professional News that Halfon asked the secretary of state: “Are [nursing students who are working for the NHS] paying tuition fees, and if they are, can you make sure they are not paying for tuition that they are not receiving?”

Williamson did not provide an answer and told Halfon he would “come back to you on that point”.

In recent weeks we have asked NHS England, the Department of Health and Social Care, Health Education England and the Department for Education for an answer to whether or not nursing students are continuing to rack up tuition fee debt as they work for the NHS during the coronavirus pandemic.

We asked the Department for Education again yesterday, ahead of today’s campaign launch, and received the same statement as we have received each time: “We are grateful to all students who choose to support our NHS during this extremely difficult time and will be ensuring all students who do opt in are rewarded fairly for their hard work. We urge others to stay at home, protect the NHS and save lives.”

It is now time for the government to provide an assurance that the debt is ours, not theirs. If you would like to add your backing to our campaign, please use the Twitter hashtag #ourdebtnottheirs or email our group editor: Sarah.Richardson@researchresearch.com.