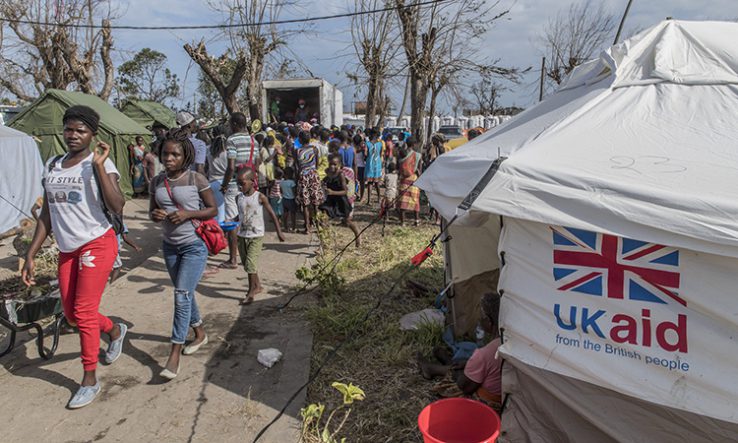 Image: UK Department for International Development [CC BY 2.0], via Flickr

With the amount it has been allocated from the UK aid budget for the new financial year, UK Research and Innovation will not be able to cover its existing funding commitments.

A UKRI spokesperson confirmed to Research Professional News that for the financial year 2021-22, the agency is facing a shortfall of £120 million between its Official Development Assistance (ODA) allocation—which has been reduced to £125m—and its commitments to grant holders. UKRI is now reviewing all its ODA funding commitments for the year. This will affect projects funded through both the Global Challenges Research Fund (GCRF) and the Newton Fund.

According to well-placed sources, UKRI is writing to university vice-chancellors to set out the extent of cuts required at their institutions and will be asking universities to decide how to spread cuts across their research projects.

The UKRI spokesperson said it was too early to detail the final impact of its review on grants funded by the GCRF, Newton Fund and other ODA funds with its councils, and Innovate UK, but “we expect to be making some very difficult decisions—including issuing grant termination notices”.

“We will endeavour to work with grant holders to mitigate these cuts as far as possible by reducing spend in 21-22 and reprofiling spend into future years,” they said.

The news comes after UKRI’s chief financial officer Siobhan Peters told staff on 3 March that the funder could not finalise its budget for the 2021-22 financial year due to uncertainty over funding, with insiders describing the mood of the meeting as “gloomy”.

As well as cuts to its ODA budget, the funder’s financial situation is complicated by the lack of clarity over how the UK government will pay for UK association to the European Union’s R&D programme, Horizon Europe.

Figures published in January by foreign secretary Dominic Raab show a 50 per cent cut in the ODA allocation for the Department for Business, Energy & Industrial Strategy—which supports both the GCRF and Newton Fund—from £1.4 billion in 2020-21 to £706m for 2021-22. The drastic reduction is a result of the government’s decision to cut the aid budget from 0.7 to 0.5 percent of gross national income, compounded by a drop in GNI as a result of the Covid-19 pandemic.

Research Professional News understands that ODA-funded projects awarded by UKRI but which have not started are likely to be cancelled or not funded at the promised level.

Researchers have reported delays in grant applications for ODA-funded projects and have been advised to reduce their budgets.

Peter von Dadelszen, a professor of global women’s health at King’s College London, has a shortlisted grant application with the Medical Research Council with a budget of £3m.

“We’ve been given a significant steer that nothing over £2m would be countenanced, so we’ve got to find a one third saving between ourselves and our partners in Africa,” said von Dadelszen.

João Porto de Albuquerque, who sits on the strategic advisory group for the GCRF and is the director of the Institute of Global Sustainable Development at the University of Warwick, said “there have been a number of strategies that UKRI colleagues have used so far to manage the cuts, including delayed starts and reprofiling costs, rather than cutting and cancelling existing commitments”.

But UKRI now appears to be faced with no other option. Research Professional News understands that the funder has looked at whether it could cover the costs of ODA-funded projects through its core budget, but the potential for Horizon Europe to be paid for by UKRI, which is still understood to be under discussion, has made this less feasible.

The cuts amplify concerns over the long-term future of both the GCRF and the Newton Fund, both of which are due to come to the end of their current cycles in 2021. Despite touting science as one of its priority areas for aid spending, the government has remained tight-lipped about how the reduced ODA budget will affect research.

James Duddridge, parliamentary under-secretary at the Foreign, Commonwealth and Development Office, warned on 8 February that “difficult decisions will be necessary” regarding research funded through ODA, and that ministers were working through spending plans during February and March.

UKRI chief executive Ottoline Leyser told Research Professional News: “Since 2014, with the decision to spend a significant element of the ODA budget on research and innovation, the research and innovation community has worked to establish high-quality collaborations across developing countries and to build a powerful portfolio of projects aimed at addressing the UN Sustainable Development Goals.

“We are only too aware of the impact the sudden reduction to our ODA budget will have on these programmes, on the research and innovation community, and on the researchers, partners and communities around the world with whom we have been working so closely over many years.

“Given the situation in which we find ourselves, we are now focused on working with everyone to implement these cuts as fairly and transparently as possible. We are anxious to use whatever options are available to manage and mitigate their impacts.”

Meanwhile, Research Professional News understands there is growing concern in UKRI over where the future budget for the new £800m Advanced Research and Invention Agency will come from.

Some sources expressed concern that the new business secretary Kwasi Kwarteng and No 10 did not understand how difficult the financial situation is, despite consistent messaging about the government’s ambition for the UK to become a “science superpower”.

There are also fears of an increasingly short-termist approach to R&D funding within government that predates Covid-19 and makes it hard for UKRI to set multi-year funding budgets.

Commenting on UKRI’s overall budget settlement, Leyser said: “The pandemic continues to have a profound impact on the UK economy, and the subsequent effect on public sector finances was evident in the chancellor’s budget on the 3 March.

“Last November the Spending Review outlined the BEIS budget and we continue to discuss with them the detail of the UKRI settlement and non-ODA allocation for 2021-22, and where possible, for 22-23 and 23-24.

“We are preparing for a difficult financial year ahead. We will work to sustain as much capability and capacity as we can across the research and innovation system and to champion its extraordinary potential to fuel the post-pandemic recovery, building a greener and more inclusive knowledge economy.”