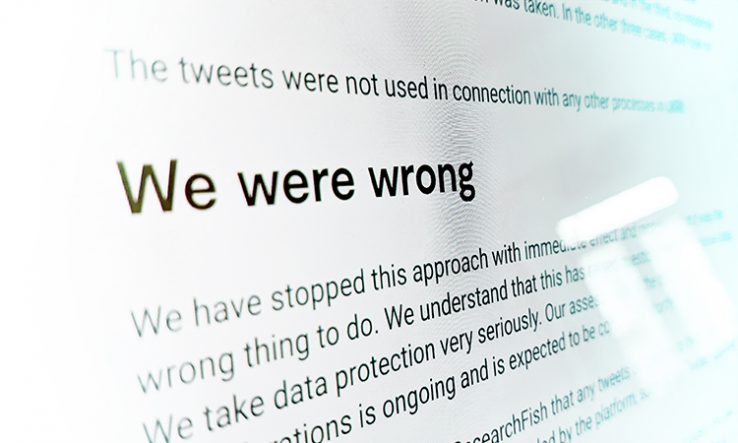 Funder reveals it agreed Researchfish should share “abusive” tweets with it

National research funder UK Research and Innovation has admitted it encouraged Researchfish to report some tweets from academics to it, after enraged researchers criticised the online service for doing this last month.

Researchfish is used by leading UK funders to track researchers’ work. A number of researchers accused it of intimidation and bullying last month after it said it had reported them to their funders for posting critical Twitter posts about the service.

Now UKRI has admitted it agreed with Researchfish that the latter’s staff should flag “abusive, threatening or offensive tweets” to it, and apologised for this approach. It said it had originally agreed with reporting of tweets to protect those affected by abuse and that this had no impact on grant decisions.

“We have stopped this approach with immediate effect and recognise that it was the wrong thing to do,” UKRI said on 19 April.

“We understand that this has raised questions around personal data. We take data protection very seriously. Our assessment of the data protection considerations is ongoing and is expected to be concluded shortly.”

The Researchfish row started when the service responded on Twitter to several academics at UK universities to say it thought their criticisms of the service were “inappropriate” and that it had reported them to their funders.

Many funders require academics to report their work outputs using Researchfish, and researchers were outraged at what they saw as a heavy-handed response to often mild criticism or mockery. Researchfish has since apologised for the tweets that triggered the row.

In a surprise statement on 19 April, UKRI admitted that it had played a part in the controversy’s history.

“Following some abusive tweets in 2018, UKRI and Researchfish staff discussed sharing abusive, threatening or offensive tweets so that UKRI could suggest the senders reconsider their language,” it said.

“This was intended to protect colleagues who were impacted by abuse. At no point was this ever intended, or used, to affect current or future grants from UKRI.”

According to UKRI, there were six incidents of tweets being flagged to the funder over four years. In three of those, UKRI said it contacted either the host university or the individual directly. In two cases, it said the individuals deleted their tweets and in the third, no response was received and no further action was taken. In the remaining three cases, UKRI said it took no action.

The funder said the tweets were not used in connection with any other processes in UKRI.

‘It was the wrong thing to do’

Following a freedom of information request, UKRI initially said it could not disclose its correspondence with Researchfish about social media comments because the cost of carrying out the request would be too high. However, it said it was now processing a more specific request.

It has now outlined its apparently close relationship with the company in more detail.

“We apologise for our approach and actions on this issue, and the concern this has caused,” said UKRI. “We believe that all staff have the right to work free from abuse, bullying or threat. We recognise the right of people to criticise an organisation or system without fear of reprisal.”

The funder said it has now agreed with Researchfish that any tweets of concern should be dealt with via Twitter’s own reporting function.

Regarding its use of Researchfish data, UKRI said it helped the funder “achieve our objectives by learning what works and informing our investment policy decisions, and by demonstrating the rationale for further investment and demonstrating our impact to stakeholders”.

UPDATED 20/4—This story was updated with additional details of the FOI request to UKRI.