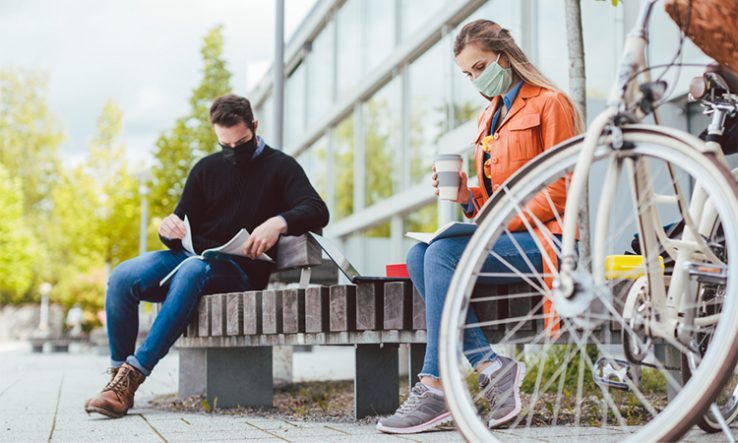 Pressure is mounting on the UK government to update its guidance on face coverings in universities, as institutions take matters into their own hands ahead of the start of the academic year.

Fears of coronavirus outbreaks in universities and schools have been rising this month and on 26 August the government announced secondary school pupils would have to wear face coverings in school corridors in local lockdown areas of England.

Despite this shift, the Department for Education’s guidance for universities—which was last updated on 17 July—makes no mention of the wearing of face coverings.

A spokeswoman for vice-chancellors’ group Universities UK said universities would be following official government guidance and the latest public health advance “as they have done throughout the pandemic”.

But several universities—including Oxford and Warwick— have introduced their own rules requiring masks in some areas.

Research Professional News understands that others are planning or considering the use of face coverings by staff and students with some providing washable face coverings, along with refillable hand sanitiser bottles, in induction week packs.

Linda Bauld, a professor of public health at the University of Edinburgh, said the university’s medical school would “definitely” be including face coverings in their own guidance ahead of the start of term.

“We are not going to require face coverings in the classroom at the moment or in individual offices,” she told Research Professional News. “But we are requiring them in communal areas and when going in and out of the buildings.”

Other measures being considered by the medical school include putting markers down on the floors to enable single lanes of people walking through the building and converting the kitchens into hand-washing stations.

She described the measures as “proportionate and sensible” and urged other universities to consider taking similar action.

“If we get down to a position where case numbers in the community are tiny or non-existent then these measures aren’t needed,” Bauld added. “But last week the ONS infection survey said there were around 2,400 cases in the community every day last week. That’s still a lot.”

Bauld would now like to see the government amend their guidance for universities.

Bharat Pankhania, a senior clinical lecturer at the University of Exeter, agreed that the guidance should be updated.

“I have always advocated that you should wear a face mask in a setting where social distancing and crowded places occur,” he told Research Professional News.

“So, if you are in a crowded lecture theatre—even if you have introduced hand washing, social distancing and extra ventilation—face masks would be of some marginal benefit.”

But Pankhania said there must be some flexibility for those who are hard of hearing and rely on lip-reading. “We should do our best to protect the majority but we must also make allowances for those who cannot wear a mask,” he said.

David Strain, chair of the British Medical Association’s medical academic staff committee and a senior clinical lecturer at the University of Exeter’s College of Medicine and Health, told Research Professional News the university would be providing free disposable face masks where teaching cannot be held in a physically distanced manner, such as anatomy lectures.

“As far as we are concerned, people coming to universities are adults—they’re all 18 and over. Therefore all the guidance that is in place for the use of face masks when physical distancing isn’t possible should be in place for students returning, and here at the University of Exeter we have made it our policy that that will be occurring.”

He described the government’s readiness to provide guidance as “very slow”.

“From their point of view, they want everything to be appearing business as usual for the sake of Brexit negotiations and everything else that’s going on,” he said. “That has resulted in them being slow to provide this type of guidance.”

Jo Grady, general secretary of the University and College Union, said the union believed that face-to-face contact must be kept “to the absolute minimum to avoid contributing to the spread of Covid”.

“The government’s own advice is that people wear face coverings when mixing with people they do not usually mix with. When face-to-face interaction is unavoidable, universities should ensure that face coverings are worn by staff and students when it is suitable to do so.”

A Department for Education spokesperson said it would update its guidance before the start of term “based on updated advice following SAGE [the government scientific advisory group] discussions later this week”.

“The safety of students and staff must be a priority, and we expect universities to make judgements based on the latest public health guidance,” they said.