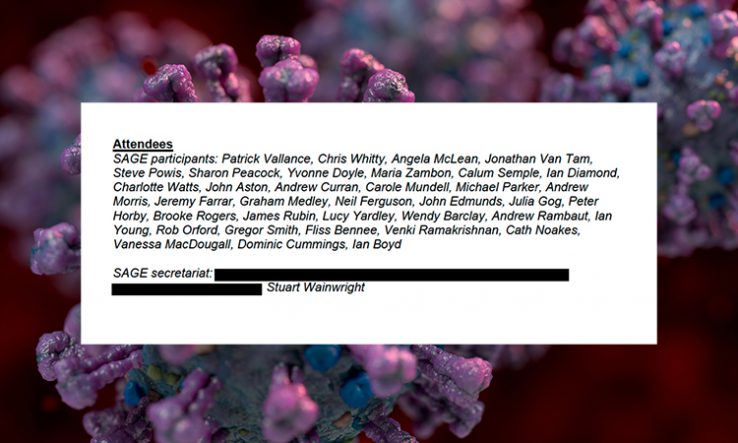 Dominic Cummings a participant, tracing capacity for only five cases a week, and more

The unprecedented release on 29 May of the meeting minutes for the government’s Scientific Advisory Group for Emergencies while an emergency is still ongoing have provided a unique insight into the advisory group’s evolving thinking on Covid-19.

Usually, minutes are only published after an emergency for which Sage is convened ends.

The minutes shine some light on issues the government has been repeatedly criticised over, including on:

Sage’s initial discussions appear largely academic, with little sense of urgency over putting in place measures to prepare for a UK outbreak. Throughout the early weeks, Sage talks about delaying rather the stopping a UK epidemic, using ‘worst case scenario’ planning borrowed from flu and seemingly without an urgent ramp of capacities to deal with the coronavirus. Eight meetings in, on 18 February, it still talks about a UK outbreak in hypotheticals: “should there be an outbreak of Covid-19 in the UK,” it says.

It’s not until early-to-mid March that minutes get longer, attendance higher and a keen sense of urgency on multiple fronts is apparent. Attendance goes from as few as eight scientists at a meeting in February to as many as 50 in April and May, and minutes go from as little as a single page to four pages long.

So what do the minutes say on controversial issues the government has been criticised over?

When the Guardian first revealed that the prime minister’s chief aide, Dominic Cummings attended Sage meetings, which raised concerns over the independence of scientific advice, the government claimed Cummings only attended as an observer.

But the minutes of 25th meeting, on 14 April, which initially only broke down those present into participants and secretariat, listed Cummings under ‘Sage participants’ alongside scientific experts.

An addendum added later says there are three types of attendees and that the government “attendees listen to this discussion, to help inform policy work, and are able to provide the scientific experts with context on the work of government where appropriate.” But the initial categorisation will likely fuel questions over the nature of Cummings’s involvement in Sage, especially as he is also listed under the heading ‘Sage participants’ on at least one other occasion before the minutes started separating out government attendees.

On the day chief scientific adviser Patrick Vallance controversially floated the idea of herd immunity in media interviews, 13 March—only for the idea soon to be dismissed by ministers—the 15th meeting notes Sage’s “near certainty” that not letting the virus take hold in the population would only lead to a second peak. Avoiding this scenario is the basis of the herd immunity idea.

The minutes say: “Sage was unanimous that measures seeking to completely suppress spread of Covid-19 will cause a second peak. Sage advises that it is a near certainty that countries such as China, where heavy suppression is underway, will experience a second peak once measures are relaxed.”

Again, the minutes seem to raise more questions over whether Sage did indeed advise the government not to fully supress the spread of Covid-19 and to follow herd immunity. The actual advice provided by Sage has still not been released publicly.

Other criticisms have alleged that the government’s focus on planning for flu, which includes the idea of herd immunity achieved through vaccination, meant that Covid-19 was seen as an inevitable epidemic that cannot be stopped. This seems somewhat supported by the minutes.

From the start, Sage appears to be focusing on delaying the epidemic, rather than stopping it in its track. Its second meeting, on 28 January, tasks its influenza modelling group SPI-M “to advise on actions the UK could take to slow down the spread of the outbreak domestically”. The next meeting talks about pushing the outbreak out of winter months.

Its ninth meeting, on 20 February, discussed a Public Health England paper on monitoring and contact tracing, the purpose of which is detection and containment “to delay spread” of Covid-19 rather than to stop it taking hold. “Mitigations can be expected to change the shape of the epidemic curve or the timing of a first or second peak, but are not likely to reduce the overall number of total infections,” notes the 11th meeting, on 27 February.

Sage appears to have concentrated on what it knew—influenza. Unlike some Asian countries that seem to have learnt the lessons from Sars outbreaks and were better prepared, from the outset Sage used flu plans to frame responses to Covid-19. Its second meeting agreed “that pandemic influenza infection control guidance should be used as a base case and adapted” and this was stuck to for some weeks to come.

Even where the evidence pointed at possible differences, for example around children and transmission in schools, Sage still stuck to assumptions based on flu.

“Sage would like modelling to assume a similar pattern of infection to influenza,” its 7th meeting, on 13 February, notes, even as its previous meetings noted that “there have been no reports of illness among children”, that “under-20s appear to be least susceptible”, and that “clinical reports suggest that severity of disease may be less” in children.

Another notable issue is the apparent lack of Public Health England’s (PHE) capacity to test for Covid-19. Sage’s 4th meeting, on 4 February, notes that regional diagnostics capacity “cannot be substantially increased during this winter influenza season”.

More strikingly, perhaps, its next meeting, which took place on 6 February, said that it would not be possible to get that testing capacity up even by the next winter: “It is not possible for the UK to accelerate diagnostic capability to include Covid-19 alongside regular flu testing in time for the onset of winter flu season 2020-21.”

At one point in February, Sage says PHE only has capacity to test and contact trace five cases a week—despite saying in January the diagnostics capacity was good.

The minutes of its eighth meeting, on 18 February, say,  “Currently PHE can cope with five new cases a week (requiring isolation of 800 contacts). Modelling suggests this capacity could be increased to 50 new cases a week (8,000 contact isolations) but this assumption needs to be stress tested with PHE operational colleagues.”

This contrasts starkly with Sage’s first meeting, on 28 January, that noted “The UK currently has good centralised diagnostic capacity for WN-CoV.”

Amid low testing and tracing capacity, early meetings of Sage spend time developing evidence for dropping the approach—rather than focussing on how to boost it—and communicating that move to the public.

At its 6th meeting, on 11 February, it asks PHE and SPI-M to “develop criteria for when contact tracing is no longer worthwhile” and, later, for “when monitoring and contact tracing should be reviewed, revised or stopped”. It acknowledges that “any decision to discontinue contact tracing will generate a public reaction—which requires consideration with input from behavioural scientists”.

But despite dropping community testing in early March, Sage meetings later that month highlight the “critical importance of scaling up antibody serology and diagnostic testing to managing the epidemic”.

“A solution is urgently required, with a plan for implementation,” say the minutes of its 16th meeting, on 16 March. By the 18th meeting, on 23 March, it says “increased community testing and surveillance will be invaluable to measure the effects of the interventions taken”.

The 22nd meeting, on 2 April, notes the importance of a testing strategy and community testing once again. The 26th meeting, held on 16 April, in the midst of health minister Matt Hancock’s drive to meet a target of 100,000 tests a day, notes that PHE confirmed it was “unable to deliver a community testing programme”.