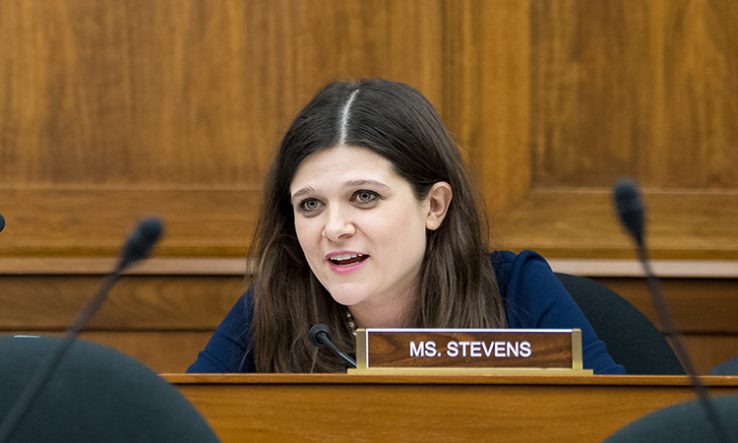 Members of Congress from both major parties have warned that the United States could lose a generation of up-and-coming research talent due to the Covid-19 pandemic, unless the government acts quickly to shore up the financial position of universities.

“Because many universities have instituted hiring freezes, there are great concerns that many postdocs will have to leave academia to find a job in the near term,” Republican congressman Jim Baird said at a House science committee hearing on the impact of Covid-19 on university research on 9 September.

“It is critical Congress takes steps to fight the threat of such a loss of STEM [scientific, technical, engineering and medical] talent and ‘brain drain’.”

“The impacts to our wider STEM pipeline could be devastating,” agreed Haley Stevens (pictured), Democratic chairwoman of the subcommittee on research and technology, adding that “many institutions find themselves in real danger of financial ruin”.

Witnesses at the hearing painted a picture of a dire situation for early career researchers. Physics PhD student Ryan Muzzio from Carnegie Mellon University said that over two months he “barely accomplished what [he] would normally do in a week”, and that the job market for graduate students has rapidly dried up.

David Stone, vice president for research at Oakland University, said the impact would fall most heavily on women, minorities and first-generation students. He also highlighted that regional universities provide “the backbone of the US science, engineering and technology workforce pipeline” and often rely on state funding, which is facing the threat of significant cuts.

The committee heard that research universities have been forced to step in and finance core research facilities that would usually be paid for by user fees. Joseph Walsh, head of innovation at the University of Illinois System, said this was “unsustainable”, warning that if universities are forced to stop funding their own facilities, “part of the cornerstone of the nation’s research infrastructure [will be] lost”.

Witnesses and members of the committee were united in their support for legislation introduced to Congress that would provide $26 billion in emergency funding to science agencies for full-cost extensions of research grants. The Rise Act was marked up by the Senate science committee on 16 September, and 26 scientific societies have orchestrated a letter-writing campaign to urge members of Congress to pass the bill.

Further support for higher education institutions could come from a fourth Covid-19 stimulus package, building on the $6bn provided under the Cares Act passed in April. But Congress is in deadlock over separate relief packages introduced by the two parties, with the Democrats proposing $37bn for higher education, and the Republicans $29bn.

For Stone, a deal can’t come soon enough. He said: “While we appreciated the Cares Act funding of universities, those funds made up for less than half of the costs we have already incurred.”